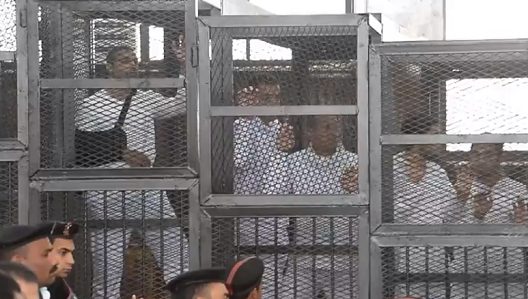 It was the moment the Egyptian courtroom had been waiting for: the evidence proving three jailed Al-Jazeera English journalists were involved in terrorist activity. It took almost two hours for the presiding judge Mohamed Nagi to inventory the contents of the hotel room of the “Marriot terror cell”, the nickname given by local media to the Qatari channel’s Baher Mohamed, Mohamed Fahmy, and Peter Greste.

The evidence ranged from laptops, memory cards and cameras – the standard equipment of any correspondent – to electrical cables, pieces of A4 paper, a bum-bag and a necklace.

The trio has been incarcerated in Cairo’s notorious Tora prison since they were arrested last December from their hotel suite and makeshift TV studio. An interior ministry video of their arrest was leaked to local channel Tahrir TV and broadcast to the theme tune of superhero film “Thor.”

They are charged alongside fourteen others with spreading false news and joining or assisting a terrorist organization. If found guilty, some could face the death penalty.

Wednesday’s proceedings were farcical: objects were pulled from cardboard boxes tied with string and at one point a member of the prosecution took a lighter to a security seal to force open a suitcase.
The three journalists, dressed in white tracksuits, gripped onto the wire mesh of a courtroom cage as their belongings were being counted in front of them.

“I have never betrayed Egypt,” Fahmy told the judge, his arm in a sling after his shoulder was broken ten weeks ago: an injury, which has yet to be treated.
They were handcuffed to three other defendants. One, a political science student called Sohaib Said who has never worked for Al-Jazeera, shouted he had been tortured in custody and barred from seeing his family.

Above them pigeons flew across the room.

The trial, which was adjourned until March 24, has raised serious questions about press freedoms in Egypt. Arbitrarily jailing journalists on terrorism charges is a first in Egypt and sets a worry precedent that threatens all reporters, both local and international, who criticize the government in their writing. Egyptian public and private media already practises self-censorship but should the trio be found guilty, it will only discourage journalists from holding their government to account.  The trial has been condemned by the White House, the European Union and the United Nations and sparked an international campaign calling for their release. Most recently the Australian Prime Minister Tony Abbot said his government was “deeply concerned” that Greste, an Australian citizen and award-winning former BBC reporter, was facing criminal proceedings.

In 2013, Egypt was named the third deadliest country for journalists to work in, after Syria and Iraq and is among the top jailers of reporters in the world, according to international watchdog, the Committee to Protect Journalists.

“This is the worst deterioration we have seen in Egypt’s press,” Sherif Mansour, CPJ’s director in the MENA region told EgyptSource. “Worse than [the Hosni] Mubarak era,” he said.

Since the military ousted Muslim Brotherhood president Mohamed Morsi in July, at least five journalists have been killed while doing their job and more than sixty detained. Seven remain behind bars, including four Al-Jazeera reporters, Mansour said.

The night before the hearing the military assured international correspondents they were welcome in Egypt at a dinner attended by generals at the capital’s chandelier-incrusted Air Defense House.  But the military-backed authorities have frequently lashed out at foreign publications for portraying them in a negative light and accused reporters of supporting the Brotherhood.

The threat of arrest hangs over those still operating in Egypt. The plight ofBaher, Fahmy, and Greste is a sober reminder of how far the interim government will take a grudge.

And this grudge, the families of the jailed journalists said, is actually against Qatar.

“They are scapegoats,” told Adel, Fahmy’s brother queuing up to enter the battered courtroom. Their relatives are stuck in the middle of the diplomatic spat, he said.
The relationship between Cairo and Doha has soured since Morsi’s overthrow, as Egypt accuses Qatar of siding with the Brotherhood,.

Mubasher Misr, Al-Jazeera’s local channel in Egypt, angered many by taking a strong editorial line against July’s coup, which was preceded by nationwide protests against Morsi and his Islamist backers. It emerged last year that the Qatari network was also paying for the bed, board and commentary services of Brotherhood members taking refuge in Doha.

However Baher, Fahmy, and Greste work for Al-Jazeera English: a point which the prosecution’s witness, an investigating officer for the case, appeared to be confused by during Wednesday’s hearing, as he kept referring to Mubasher Misr. The international channel’s editorial policy is widely perceived to be more objective.

The political dogfight is unlikely to be resolved any time soon: Egypt said on Thursday it had no plans to return its ambassador to Qatar, after removing him in protest last month. On the same day Saudi Arabia, the United Arab Emirates and Bahrain also withdrew their envoys from the tiny oil-rich peninsula, over “interference in their internal affairs” and its support for the Brotherhood. The Gulf countries have forged a strong alliance with Egypt, after plowing billions into Cairo’s flailing economy following Morsi’s departure.

Meanwhile, and Baher, Fahmy and Greste, remain locked up in the belly of the capital’s Chateau D’If: Tora prison.

Standing outside the gloomy prison complex, their relatives painted a grim picture. Fahmy, a former CNN correspondent who only joined Al-Jazeera a few months ago and Baher, a local producer, were initially kept in “Aqrab,” (Scorpion), an apt name for Tora’s maximum security unit.

Fahmy’s fiancée, who wished to remain anonymous for security reasons, told me he had been chained to the bars of his windowless insect-ridden cell for 24-hours a day of solidarity confinement and was refused painkillers for his broken shoulder.

All three have since been moved to more comfortable accommodation. Comparatively.

In the new detention, Peter Greste’s brother Andrew said they were fighting isolation and boredom.

“They are coming up with ways to cope, they are taking longer to prepare their food, they invented games with bottle tops… and are decorating the inside of their cells with what we would call rubbish,” Andrew said. They are only allowed one hour outside: so they have marked off a corner of their cell for exercise.

The families are allowed occasional visits but can only bring them food and clean clothes. Books and writing implements are forbidden.

“We are very alarmed we feel this case is politicised,” Said Fahmy’s brother Adel.

Morsi’s prime minister Hisham Qandil and the spiritual head of the Brotherhood Supreme Guide Mohamed Badie are jailed in the neighbouring cells of the three reporters. Anas, the son of Brotherhood leader Mohamed El-Beltagy, is one of the defendants in the case.

Human rights lawyer Mohamed Farouk, on the reporters’ defense team, said the trial could continue for another eight sessions, with a month gap between each hearing. This means Baher, Fahmy and Greste will have spent almost a year in detention before the verdict, as bail is rarely granted in terrorism cases. The next sessions will be largely procedural as the court hears from witnesses and examines the evidence. Their lawyers say the trial is farce but the defendants, whose charges are extremely serious, are at the mercy of the political climate: Egypt wants to find them guilty.

Meanwhile the trial is taking its toll on the families: Adel’s father was nearly thrown out of the courtroom after lashing out at the judge and bursting into tears.

“We cannot sleep. I wish I was in Mohamed’s place,” Adel said.

Bel Trew is a print and broadcast journalist based in Cairo.