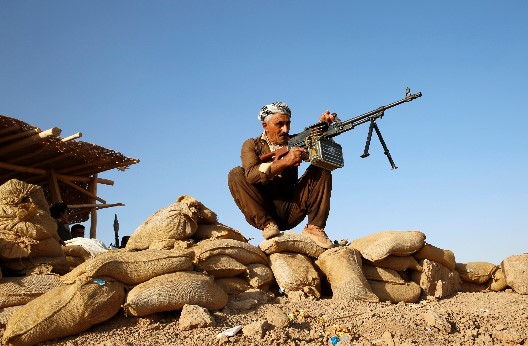 As the pressure on the Islamic State (ISIS or ISIL) mounts against the backdrop of coalition attacks and a Kurdish offensive in Syria’s Raqqa region, militant recruitment has become a pressing matter for the radical organization, which has lost many fighters in clashes around Iraq and Syria. According to the Syrian Observatory for Human Rights (SOHR), out of 1,800 people killed during the Kobani battles, 70 percent belonged to ISIS. On February 14, 132 fighters died across Syria, including forty-four ISIS militants. Given mounting losses, ISIS expansion has relied on a two-pronged recruitment approach: targeting foreigners looking to join the new caliphate and enlisting members of the local population. While the foreign recruitment strategy appears successful, local recruitment faces growing obstacles in Syria and Iraq.

ISIS has relied on a powerful branding strategy, diffusing violent images on social media, YouTube, and Twitter. The organization has released several documentaries boasting its military exploits such as the Flames of War featuring heroic jihadists and gruesome footage of bombings and executions. This systematic glamorization of violence has allowed the terror group to attract foreign recruits. In January, a new study by International Center for the Study of Radicalization and Political Violence estimated that the number of foreign fighters in Iraq and Syria had reached about 20,000.

ISIS’s local recruitment approach has been described in Idarat al Tawahosh, (The Management of Savagery), a book written by Abu Bakr Naji in 2004, which ISIS has adopted. Naji argues that the first step for recruitment is “the creation of organizations to improve the management of the areas under our control.” ISIS applied this technique initially following its surge in June. The groups managed everything from bakeries and banks to schools, courts, and mosques in Raqqa. One activist admitted at that the time that the organization had been doing “massive institutional work.”

A second recruitment tool imagined by Naji was the manipulation of tribal antagonism in favor of the organization. ISIS attempted to mobilize Arab crowds ahead of the battle of Tel Hamis in Syria last year using flagrant anti-Kurdish discourse. In accordance with Naji’s recommendation to use money or power as incentives, activists in Raqqa report that ISIS offered cash and sabaya (female slaves) to local tribal leaders to encourage them to swear allegiance.

Indoctrinating local populations and its youth was another cornerstone to Naji’s manifesto. Since its inception, ISIS has imposed religious and military training on children in the Raqqa province. The same activists report that the group uses two training camps—Sharea Ashbal and Maahad Ashbal al-Khilafa—to indoctrinate and train children. According to a Syrian Human Rights Committee report in August, at least 800 children under eighteen who had been recruited by ISIS. Other reports highlight the more than thirty kids fighting with ISIS in Kobani. An ISIS defector said that militants targeted the young to break down traditional authority structures: alliance to the family and to the tribe.

While these strategies succeeded initially, they appear more difficult to maintain in the wake of the continuous coalition, Kurdish, and Shia militia attacks on ISIS. The counteroffensives have killed many militants disrupted the transfer of goods between regions under the organization’s control. Naji’s governance tool appears to be faltering as residents ISIS-controlled areas increasingly complain of rising food and fuel prices and declining services. The price of staples such as bread has also risen significantly and basic products have become scarce.

ISIS has since resorted to aggressive means for youth recruitment, triggering resentment in some areas. One Iraqi activist notes that the organization often recruits children without the knowledge or approval of their families, leading to a drop in school attendance. A wave of conscription among youth in Mosul, Hawija, and Kirkuk in Iraq has in some cases led to kidnappings to coerce families to provide them with fighters (although reports could not be independently confirmed). ISIS militants also arrested forty ex-fighters in the Nusra Front and rebel factions from the village of Abriha and town of al-Sahil and trained them in sharia camps before sending them to battlefronts. Syrian activists said that ISIS also began forcing male members of foreign families that had come to live in the Islamic State, but did not want to fight, to participate in battles.

As a result, ISIS has suffered increased defections in Syria, particularly after the fall of Kobani. Militants have tried to return home or join other groups. ISIS executed 100 jihadists who attempted to defect. Defections have left the organization possibly facing a shortage of wiling martyrs. Other reports point to ISIS police arresting 400 fighters in Raqqa for not reporting for duty. The same Iraqi activist reported that the organization banned truck drivers from transporting ISIS fighters to limit desertion. In both Raqqa and Mosul, the transit of residents in and out of the city has been closely monitored.

Decreasing human resources may account for ISIS repositioning across areas under its control. ISIS had to transfer in late December 800 Chechens, Afghans, and Syrians with their families to the city of Tel Affar (50km west of Mosul), which was scene of heavy fighting. The number of Islamic State checkpoints and patrols also dwindled in the Syrian border town of al-Bokamel in January with troops possibly funnelled into Iraq.

ISIS relies heavily on the loyalty of both its muhajireen (foreign fighters) base and ansar (local supporters). While the organization’s successes bolstered its appeal among foreign fighters, warlords, and tribes whether in Syria or Iraq, new losses may be starting to chip away at its aura of power. The rate of recruitment has dropped by more than half in February (only fifty-four recruited) compared to January 2015. Compare this figure to June 2014, when nearly 6000 fighters had joined ISIS.

Growing defections, rising tensions, and declining local recruitment puts added pressure on ISIS and provides the US-led coalition and the Bagdad government with a window of opportunity to degrade the organization. But in Iraq, other social, political, and economic reasons account for local support of ISIS. Naji’s tactic using tribal antagonism to breed organizational loyalty may not have had enough time to sink in, but for many Sunnis—particularly in Iraq—no credible alternative to ISIS has emerged. The Iraqi government will need to take concerted steps to diffuse sectarian tensions and present itself as that alternative. ISIS also benefits from the use of both Syrian and Iraqi territory according to its military needs. The anti-ISIS coalition will need a more comprehensive approach in Syria if it hopes to win the day.

Mona Alami is a Nonresident Fellow with the Atlantic Council’s Rafik Hariri Center. She is a French-Lebanese journalist and based in Beirut. Follow her on Twitter @monaalami.

Image: A Kurdish Peshmerga fighter takes position he keep watch on two moving vehicles belonging to the Islamic State at the Bakirta front line, near the town of Makhmur south of Erbil September 10, 2014. REUTERS/Ahmed Jadallah