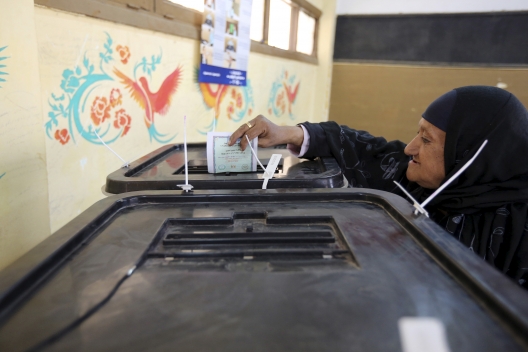 Photo: A woman casts her vote at a polling station during the second round of parliamentary elections at Shubra Al Khaymah in Qalyubiyah governorate near Cairo, Egypt, November 22, 2015. (Reuters/Mohamed Abd El Ghany)

After a three and a half year absence, the Egyptian parliament is back in business as the final rounds of election are coming to an end. A revote for thirteen seats is taking place in four constituencies, after which all seats in the parliament will be filled. Since the Supreme Constitutional Court (SCC) dissolved the People’s Assembly in June 2012, Egypt has been without a legislative branch. After multiple delays, parliamentary elections were finally held in accordance with the Constitutional Declaration of July 8, 2013. The new parliament, set to convene in a few weeks, is however the product of major political and constitutional difficulties, and could face dissolution before completing its 5-year tenure.

A close look at the legal and political context, and the handling of the laws governing the recent elections, reveals the government’s indifference towards the need for a legislative body. The process with which these laws were amended led to a prolonged delay of parliamentary elections. This trend was propagated by some in the media, most notably in calls to “let the president work,” or in other words, that the parliament may impede the president in working towards his goals.

In order for the current parliamentary elections to have been held, the three election laws—the House of Representatives, Political Participation, and Constituencies laws—had to be amended to conform to the 2014 Constitution. They were all amended and passed over a period of six months, amid legal and constitutional criticism from various political factions. Former president, Adly Mansour, amended two of the three laws on June 5, 2014, three days before handing authority to the incumbent president. Amendments to the Constituencies Law under Sisi did not take place until much later in the year, and the law was passed on December 21, 2014. As a result, the elections were put off until March 2015. A second delay came about days before the elections were slated to begin, when the Supreme Constitutional Court (SCC) found articles in the Constituencies and Parliamentary Elections laws unconstitutional. In observance with the SCC rulings, the election laws were amended on July 9 and July 29, 2015, allowing the current elections to commence in October.

However, another legislative change was introduced by the president just four days before the amendments to the election laws passed. Sisi issued Law No. 91 of 2015 on July 25, 2015 repealing the amendment made by Mansour to SCC Law No. 26 of 2014. In other words, the SCC has returned to the pre-amendment era—not bound to rule on the constitutionality of election laws within a set time frame. With cases already being filed challenging the constitutionality of the current election laws, according to which the elections were held, the SCC could again rule any provision of the contested laws unconstitutional, opening up the new parliament to dissolution before its 5-year tenure has ended.

The absence of a parliament has undoubtedly taken its toll on the political situation in Egypt. The delay of the parliament for over a year, since elections were due around this time of year in 2014, not 2015, cast serious doubts on the seriousness of the current government in building an effective democracy, where a genuine parliament performs its constitutional duties. These doubts are furthered by reopening the door to the SCC to free-handedly deny the constitutionality of any of the election laws, and consequently, dissolve the parliament. The situation is further complicated given the authority granted to the president as per Article 137 of the constitution to dissolve the House of Representatives, after meeting certain conditions in the same article.

The parliament has not only faced major challenges ahead of its election, it also faces the possible threat of being dissolved either by the judicial branch through an SCC ruling, or by the executive branch through a presidential decree. This only confirms that the Egyptian parliament will be, as it has always been, at the mercy of two other branches of government – the judicial and the executive. It is also a testament to the fact that nothing in the constitutional, legal, and political structure in Egypt has changed.

Yussef Auf is a Nonresident Fellow at the Rafik Hariri Center for the Middle East, where he focuses on constitutional issues, Islamic Shari’a, elections, and judicial matters. He has been a judge in Egypt since 2007