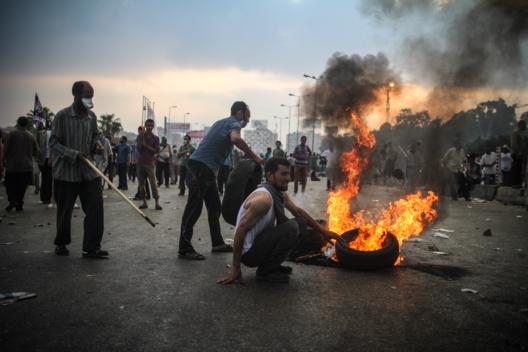 Over the past several months, the democratization movement in Egypt has been at a crossroads. Since July 3, countless secular political parties and movements have stood under their liberal and leftist banners, among them Communists, Socialists, Nasserists, and Arab Nationalists, in support of a military intervention into politics. They supported the removal of an elected president, without early presidential elections. This was despite the fact that elections were a main demand of the crowds that filled the streets on June 30. They supported suspending the constitution (my own opposition to it aside), and establishing ‘democracy’ without recourse to a popular referendum and its ballot boxes. These parties and movements are far removed from a real commitment to the principles and values of democracy—and instead, appear quite ready to compromise them.

Leftist and liberal leaders were more than happy to cooperate with the de facto authority that imposed itself after June 30.  In that time, Egypt has witnessed repeated oppressions: satellite channels were shut down, members and leaders of political parties and movements on the religious right arrested, the Raba’a al-Adaweya and Nahda sit-ins dispersed, and there is clear evidence of repeated human rights violations. Yet with just a single exception, representatives from liberal and leftist groups have continued to work with Egypt’s de facto authority. Most of their parties chose silence rather than condemn the repression.

The voices of the security state, and those newly embroiled in misleading the public all trumpet the cheers that “the people authorized” Minister of Defense, Abdel Fattah al-Sisi. They encourage hate speech and exclusionary practices; they justify state violence, human rights violations, and the bypassing of rule of law. They have trampled over rights, freedom, and democracy in their path, and label all who oppose them, who have spoken out against stripping our society bare of its humanity, against abandoning consensus and social peace and police presence, as traitors. These forces and their media campaigns have overwhelmingly won popular support; as a result the Muslim Brotherhood and their allies in the religious right continue to make irrational political decisions, and elements among them engage in acts of violence and incitement. Most liberal and leftist parties abandoned the principles and values of democracy. This has only helped society accept the return of state security’s repressive practices, and popularized statements like “the war on terrorism,” “the security solution is the only solution,” “it’s necessary to exclude the religious right,” and “human rights, social peace, transitional justice are luxuries that Egypt can’t afford when it’s facing terrorism,” and so forth.

Egypt’s de facto authority began to take substantive authoritarian measures, beginning by imposing and extending a state of emergency. They drafted a they drafted a peaceful assembly law (currently under review by the interim president) that clearly restricts the right to protest and grants the interior ministry the authority to issue administrative decisions to prevent and abolish protests and marches, and completely criminalizes sit-ins. Yet representatives from liberal and leftist groups continue to cooperate with the powers ruling Egypt. They are joined by the committee appointed to amend the 2012 constitution, which is dominated by the liberal and leftist parties and movements, and some of which support constitutional articles making the army a state above the state, thereby demolishing the civil nature of the state as well as the rights and freedoms of citizens in order to preserve military trials of civilians. It has become clear that the democracy movement will not be able to rely on these liberal and leftist movements, their parties or their leadership—they lack the courage to withdraw from the current political and constitutional scene, and will never create the democratic structure that Egypt hopes for.

Public figures rush to nominate the minister of defense for president, and liberal and leftist leaders raise their voices in support. They make justifications for him, indifferent to how these justifications have begun to break down (such as nominating a military commander under certain requirements, or that there is a no difference between a military president and the militarization of the regime). They have continued the militarization of Egyptians’ collective imagination, which began on July 3—or in other words, which began with the people’s search for a ‘military savior,’ and has resulted in people engaging in a type of politics that overlooks civilians.

Others have raised their voices, halting the discussion of initiatives that would bring an end to the current cycle of violence, dismissing them and the concepts of transitional justice and accountability. This is then followed by calls for reconciliation, and for the state to act ‘decisively.’ They criticize those who wish to prevent bloodshed and protecting souls, as though it were not society’s duty as it strives for social peace and an end to violence, an end which the security solution will not bring about on its own. They act as if stability will arrive when the state employs violence and brute force—instead of through supporting justice and rule of law. Those newly invested in misleading the public, and ‘experts of the hour,’  have managed to control the public space and reproduce a culture of silence. Politics in Egypt has stepped beyond the bounds of human history that has shaped it through the past decades—types of government quite different from military rule, single party politics, the elite. The situation has stepped far beyond the bounds of contemporary human society, which has demonstrated the primacy of consensus, negotiation, and tolerance in stopping violence, the primacy of maintaining social peace, and building democracy. Compare this vision to the security solution, and to popular discourse about hating and exclusion, we find it contradicts human society, and the fact that the leftist and liberal parties and movements are politically engaged in the current moment represents this break from history.

After July 3, and over the past few months, there has arisen a thick wall of isolation between most of the liberal and leftist parties and the democratic movement in Egypt. They have abandoned the principles and values of democracy, compromised their moral and political credibility, accepted the disappearance of humanity itself and the violation of rights and freedoms, and justified authoritarianism and a break with history.

Over the past few months, and in the context of this crossroads, the democracy movement has returned to where it began in the 1970s—in universities, a few civil society organizations, and within groups of intellectuals, writers, human rights activists and public figures. Over the course of the past months, the beginnings of the democracy movement’s struggle has crystallized at the margins of politics and public space. We have glimpsed it among the workers, and in initiatives coming from civil society, such as the ‘No to Military Trials’ group. Ideas associated with the renewal of the democracy movement on a small scale have also grown, through self-criticism and the restructuring of relationships and intersections between rights and freedoms, elections and referendums, and legal and executive institutions that are both responsible and can be held accountable. The relationship between the armies and a security apparatus that is neutral and committed to the rule of law, and citizens who maintain their dignity and participate in the way public affairs are managed are also being restructured. Over the course of the past several months—and alongside the certainty that those belonging to the democracy movement must distance themselves from the parties and groups that have failed the test of 2013—the economic, financial, and media elite have failed to hold onto their commitment to the principles and values of democracy. Instead, they have been more than willing to support oppression and the use of exceptional measures—whether out of fear of the religious right, or in seeking to secure their personal interests the state, its organizations and institutions through the usual gleam of brute force and comprehensive protection have promised them.

Continuing to rediscover our starting points, renewing the basic building blocks of struggle and thought, practicing self-criticism, and carefully reading the history of the past years—these are the current challenges for the democratic movement in Egypt, and upon which its difficult future will depend.