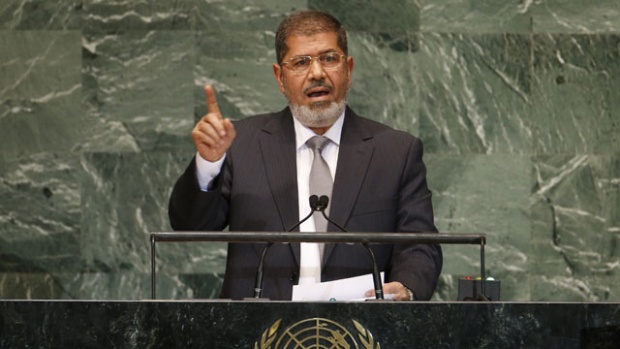 The Arab Spring has produced and reproduced a number of wonky clichés in its wake – the term “Arab Spring” itself is no exception.  From the development of a “new language” to describe the various uprisings to recommendations for “engagement” with one political actor or another, commentators and policy-makers employ vague terms that others may interpret in any number of ways. In Egypt, the phrase, “a failure of leadership,” is all too often heard to describe Mohammed Morsi’s stewardship of the transitional phase, the transition as a whole, and the role of foreign actors in it – particularly the US. The problem with this term, however, is that it tells you as much as the term “international community” or even “Islamists.” It’s a catchy phrase that implicitly assigns blame to a person, group, or entity without saying anything specific. Devoid of context, observers may infer whatever strikes them and move on, the lack of a reference point leading to misunderstanding.

With regard to President Morsi, one might say that his “failure of leadership” has led to a deeply polarized political environment and a dismal excuse for a constitution. But the phrase means nothing other than “it’s his fault.” Depending on the person hearing it, one could infer that the Muslim Brotherhood’s Supreme Guide and his Bureau reign supreme in setting Egypt’s policies, and Morsi’s subservience to the group makes him a failed leader, subject to a higher authority. Alternatively, the phrase may also inspire the thought of Morsi as an “evil genius” so bent on creating his caliphate that it made him deaf to dissenting voices. Or possibly, that Morsi’s (and/or the Muslim Brotherhood’s) lack of governing experience led him to believe that legitimacy is claimed at the ballot box, and with it the right to rule as he sees fit. Or it may even mean that the person using the term is simply an anti-Islamist, Orientalist, foreign spy, political agent with “invisible hands” trying to destroy Egypt’s revolution. It depends on who is listening.

One might also argue that the buck ultimately stops with the president. To describe Morsi’s “failure of leadership” in an oversimplified manner, however, ignores the contributing factors that led the current political impasse. Morsi’s November 22 decree and the non-inclusive marathon session of the Constituent Assembly that rammed the faulty draft through the approval process produced the political and constitutional crisis. The lack of a cohesive liberal strategy to deal with Islamist majoritarianism in the weeks leading up to the crisis and unclear liberal messaging to both the general public and their supporters, however, resulted in a semi-fragmented bloc within the assembly – some withdrew while others remained and withdrew later – and a public unaware of the reasons why they should oppose the draft in terms other than opposing Morsi.

No doubt, that Morsi and his Freedom and Justice Party fanned the flames of divisive rhetoric, but the opposition’s renewed strength in the wake of the Presidential Palace (Ittihadiyya) protests produced no new dialogue nor enough pressure to change the course of the referendum. Neither did any of the opposition leadership (with the only known exception of April 6th movement) seem to mobilize campaigners for a “no” vote on the referendum until late in the game, except to issue statements to that effect. With the Muslim Brotherhood using all available networks to mobilize their constituency, some might say the greater “failure of leadership” may lie with the opposition forces. Or perhaps, those who say such things are simply bearded and veiled, illiberal, ultraconservative, shari’a-obsessed maniacs who have hijacked the revolution. Again, it depends on who is listening.

And what of the United States and Europe? Polite commentators characterize the Obama administration’s response to Morsi’s November decree as “tepid.” In a country that touts universal values to the extent that it does, one would have expected a much stronger reaction to the backsliding on the rule of law and the constitutional contradictions that undermine individual rights in Egypt’s final draft. Some might argue that Egyptians do not want US interference, or that economic assistance will strengthen these values in the long term, or that what really matters to the US is Israeli security and politics should be left to Egyptians alone. What these arguments ignore, however, is the intersection of economy, security, and governance that can produce the stability and liberal democratic values needed to ensure a successful transition and prosperous future. The arguments also ignore the impact of a tepid response to a backsliding democracy. Perceived duplicity would hurt trans-Atlantic foreign policy when advocating for inclusive, legitimate processes and human rights. Or perhaps the “failure of leadership”  here rather lies with the speaker, who sees America as the consumer-centric, world-policing, great white Satan using Europe as its puppet.

With so many variables at play in Egypt, both domestically and internationally, it does little good to place a blanket value judgment in the assessment of each or any of the major actors in this political drama. Paying close enough attention to the factors surrounding the respective failures and successes may help point out the real challenges to producing a sound democracy. As much as many would hope, we must also occasionally remind ourselves that democracy is messy, time-consuming, unpredictable, and in the case of Egypt may not mirror those we recognize in the West. But ultimately, striving to correct specific mistakes and capitalize on opportunities will serve Egypt, the region, and the world in the long run. Or maybe this author is simply an idealistic, arm-chair analyst, with his head in the clouds. Again, it depends on who’s listening.