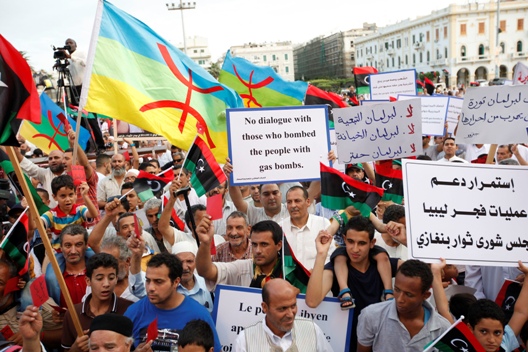 Supporters of Operation Dawn demonstrate against and to call for the removal of the new Libyan parliament based in the eastern city of Tobruk, the House of Representatives, at Martyrs' Square in Tripoli September 26, 2014. Operation Dawn is an alliance of armed groups from the western city of Misrata. (Photo: REUTERS/Ismail Zitouny)

The stalemate emerging from the armed political conflict in Libya today suggests that neither the Islamist-backed Operation Dawn nor the more secular Operation Dignity movements have the capacity to dominate the other. Consequently, continuous fire fights and troop movements burden the civilian population, further entrenching the political partisanship but never really moving the barometer toward decisive victory. Resolving the crisis gripping Libya, therefore, requires negotiations mediated by neutral facilitators. However, various stakeholders—both Libyan and international—are undermining prospects for such a resolution.

The House of Representatives has gone from imperfect to harmful. Elected by less than 20 percent of the population amid volatile political warfare, inexperienced parliamentarians failed to appreciate the importance of promoting a culture of inclusiveness and transparency. With the weight of international recognition behind them promoting a sense of deserved legitimacy, they devoted little effort or attention to the good governance needed to earn the respect and local legitimacy from their Libyan constituency. As the political rivalry took on an overtly armed dimension, the House has added fuel to the fire, lumping all Islamists together regardless of their differences and accusing them of terrorism. Facing significant opposition, the House has exiled itself to the city of Tobruk, with some of its members boycotting the sessions as they consider them unconstitutional. As such, the fractured parliament is relegated to operating in a bubble, making decisions that it cannot implement with little to no control over large swathes of Libyan territory.

Prime Minister Abdullah al-Thinni, appointed by the House, has only served to shrink the space for neutrality, partnering with like-minded external actors whose interests severely limit the chance for a negotiated solution. This week, al-Thinni traveled to Egypt to meet with President Abdel Fatah al-Sisi for discussions that focused almost entirely on security concerns. At the conclusion of their meeting, the two leaders announced their intentions to increase their cooperation in the fight against terrorism, with Egypt pledging to “support all the needs of our (Libyan) brothers.”

Egypt’s political developments over the last eighteen months have shattered any hope of consensus-building between Islamists and nationalists. Given Egypt’s clear affinity toward General Khalifa Haftar’s Operation Dignity, Al-Thinni betrayed the principle of neutrality with his visit. Several weeks ago, US officials asserted that Egypt had provided support to Emirati airstrikes against rival militias in Tripoli. This is no comfort to Islamists in Libya, given Egypt’s record of killing, cracking down on, and detaining thousands of Muslim Brotherhood members, broadly painting them as threats to national security. Al-Thinni‘s close consultations with authorities in Cairo—who came to power through a brutal coup d’état—sends a clear signal to Operation Dawn and its Islamist affiliates that a systematic and potentially armed effort to marginalize them from the political landscape is well underway. The not-so-subtle message provides no incentive for Operation Dawn forces to lay down their weapons.

The consultations with Cairo came on the heels of UN-brokered talks in Ghadames, as well as a widely welcomed proposal by Algeria to host comprehensive negotiations among Libyan stakeholders. Algeria has declared no support for either side, choosing instead to focus on the shared concern of security that has deteriorated due to actions by both sides. If the facilitated talks are to have any chance of success, Libyans need to create and preserve the appropriate neutral space for dialogue. Unfortunately, the actions by Libyan officials serve as anything but confidence-building measures.

If Libya’s leadership and the international community are truly committed to resolving the Libyan crisis through words rather than war, the pressure points are clear. The House needs to understand its responsibility in mitigating deepening polarization. By replacing al-Thinni and instead appointing a more objective figure, the House can more effectively navigate the domestic dynamics of the country. Stakeholders must also firmly communicate to Egypt to stay out of Libya’s internal affairs other than supporting the negotiations, checking Cairo’s penchant for military involvement on the premise of national security.

Ultimately, it is the Libyans who must respond to the international community’s outstretched hand offering mediation. Thus far, Libyan authorities have done little to promote neutrality and compromise, seeking partners in the wrong places.

Karim Mezran is a senior fellow with the Atlantic Council’s Rafik Hariri Center for the Middle East, focusing on the politics and economics of North Africa.