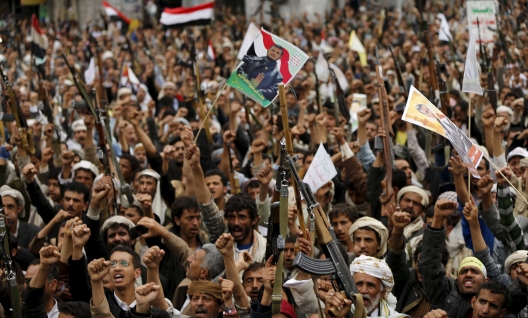 Fifty-three years after Gamal Abdel Nasser’s failed adventure in Yemen, Egypt’s President Abdel Fattah al-Sisi is rallying under that same banner of pan-Arabism, and Egypt is once again involved in Yemen’s domestic affairs. Unlike under Nasser, however, rather than trying to counter Saudi Arabia’s regional interests, Egypt is jumping on the bandwagon with the kingdom, playing a key role in a Saudi-led coalition. Instead of supporting a rebellion, Egypt is protecting the regional status quo of political and religious conservatism, but coming up against the same enemy: the Houthi tribe.

A Legacy of Interventions

A key difference in Egypt’s role in today’s Yemen conflict is its objective: the defense of Saudi Arabian and Egyptian interests and territory, rather than intervention in Yemen. Egyptian authorities had previously said that Egypt will not tolerate any meddling in the Bab al-Mandab Strait, which links the Suez Canal through the Red Sea to the Arabian Peninsula’s Gulf of Aden. In one of his interviews as a presidential candidate, Sisi called the Red Sea “an Arab Lake” and so the deployment of Egyptian marines to “police it” is neither perceived nor presented as foreign military intervention. In his latest speech, Sisi once again drove this point home, describing events in Yemen, not as aggression, but rather for the sake of the region’s “defense and security,” adding that the Bab al-Mandab strait is a matter of “Egyptian and Arab national security.”

Sisi and Prime Minister Ibrahim Mahlab have both stated they felt “obliged” to respond to the Yemeni president’s calls for support of “legitimacy.” Egyptian authorities present Yemen today as a case of intervention by invitation. Egypt’s participation is thus compared to its roles in Palestine in 1948 and the 1991 Gulf War. The legal reliance on Arab League and UN charters to justify the participation in Yemen is also reminiscent of Egypt’s participation in the second Gulf War. But unlike Palestine and Iraq, the conflict in Yemen is a domestic one. It is thus also comparable to the Syrian intervention in Lebanon in 1976.

Yemen and the Regional Balance of Power

Sisi’s decision to participate in Operation Decisive Storm is consistent with the transnational role Saudi Arabia is playing in Egyptian domestic politics. The president has clearly stated that the Egyptian army is a stone’s throw away from the Arab Gulf States, and in his first speech delivered after his election, Sisi followed the Egyptian tradition of describing Gulf security as inseparable from Egyptian national security. Saudi relations with the Egyptian military establishment are particularly resilient. Joint military training and visits continued under then-Defense Minister Sisi, even when political relations between the two countries were strained, under the Muslim Brotherhood regime.

Sisi’s decision is also in keeping with his strategy to revive Egypt’s regional role beyond a traditional “soft power.” Interventions in Libya and Yemen are part of an apparent plan to elevate the Egyptian position in regional conflicts. This has proved challenging because almost all domestic conflicts in the region have become internationalized, but has also proved to be an opportunity because it has accelerated recognition of Sisi’s regime despite some regional and international resistance. This may explain why he rushed to intervene in Libya and accepted a role in Yemen, disregarding the Egyptian tradition of awaiting a green light from the UNSC. While the United States is progressively disengaging from the region, Egypt is slowly finding a larger space to play a regional role of policing, with the selective support of Saudi Arabia and the UAE.

Egypt’s participation in Decisive Storm is a response not only to the Yemeni president’s invitation, but also to the Saudi decision to intervene. It can be seen as compensation not only for Saudi’s generous support to Sisi, but also for Cairo and Riyadh’s divergent positions over Syria, Qatar, Turkey, relations with Russia, and recent rumors about a Saudi reconciliation with the Muslim Brotherhood.

Saudi sectarian rhetoric on the conflict in Yemen, billed as a conflict between Arab Sunnis, supported by the Gulf, and Shias, supported by Iran, is foreign to Egypt’s military and diplomatic ranks. As a result, Egypt’s limited part in Operation Decisive Storm allows it to secure a role in the current regional balancing act taking place between Riyadh and Tehran. This, however, may not be Egypt’s primary objective. Sisi has so far refrained from using the sectarian narrative to justify Egypt’s participation in the operation in Yemen. According to his narrative, participation in Yemen shouldn’t send a message to Tehran, but to all Arab non-state actors, especially “terrorists,” who threaten the authority of the incumbent, and thus “legitimate”, ruling elites. Riyadh’s approach to Yemen is hence more limited than the Egyptian approach. While the former places Yemen within its sectarian and strategic confrontation with Iran, the latter puts it within the wider context of “Arab national security” interpreted as the protection of “legitimacy.”

Egypt’s intervention in Yemen goes hand in hand with Sisi’s domestic politics. First, there is no place in Arab politics today neither for revolutionaries nor for “terrorists.” Second, Egypt’s military participation asserts the military establishment’s primacy over all other state institutions, including the diplomatic establishment. The army is once again playing its role as “the savior” but this time in foreign policy.

Egyptian participation in a potential ground operation may also offer an opportunity for the army to acquire a lacking know how in irregular warfare. The Egyptian military establishment has long resisted a change in its doctrine to reorient training towards fighting terrorism as opposed to traditional armies. The deployment may also, however, result in a large number of casualties if the Houthis decide to resist, or amid violence between the Houthis and al-Qaeda. Many have been quick to recall the loss of 10,000 Egyptian soldiers in the 1962 war. The outcome will also depend on whether Egyptian troops play a limited role of peacekeeping rather than an interventionist role of peace-making.

Operation Decisive Storm has, however, enjoyed support in Egypt from Islamists and non-Islamists alike. The Nour Party, Egypt’s biggest Salafi party and a supporter of the 2013 ouster of president, Mohamed Morsi, has announced its backing for the Saudi-led coalition. While making no explicit reference to Sisi’s involvement, the Muslim Brotherhood issued a statement expressing hope that “the current developments in Yemen will quickly lead to constructive and objective national dialogue, based on the Gulf Cooperation Council (GCC) initiative and respect of the will of the Yemeni people and their revolution, which already produced a legitimate regime that should not be ousted.” The website also published a statement by Islah, the Brotherhood’s political arm in Yemen, expressing support for the military operation.

However, Egypt’s role has also triggered two domestic debates in Egypt. Some question the military’s role in foreign policy—should the military establishment, already consumed in domestic politics, restrict itself to defending Egypt’s national security? Or should it anticipate the threats beyond its borders? And how far should Egypt’s alliance with Saudi Arabia take it, calling into question the cost of Saudi Arabia’s political and financial support for Egypt? Sisi responded to the second debate stating, “We are not (participating in military action) to give back to the Gulf. We would have still risen for their support and protection even if they hadn’t had a chance to help.”

By participating in Operation Decisive Storm, Sisi is walking a fine line between securing Gulf support for Egypt and avoiding a second Yemeni quagmire that would affect his popularity at home. Previous experiences in Arab-Israeli wars, in Yemen, and even in the 1991 Gulf war, show that support can fade with an increasingdeath toll of Egyptian soldiers abroad. With increasing military deaths in Sinai and potential operations in Libya, bringing Egypt’s soldiers home may become a legitimate demand.  Sisi seems to be aware of this “concern in some of the public opinion,” as he called it. On April 4 he said that he cares for “every drop of blood and every son of this country.” While Sisi is currently facing slow but steady criticism for the postponement of parliamentary elections and mounting repression, the last thing he needs is to lose the support of the military establishment and its circle of supporters.

Yasmine Farouk is a Fulbright Visiting Scholar at Yale University. She is Assistant Professor at the Faculty of Economics and Political Science in Cairo University and an AUC Forum fellow at the American University in Cairo. She has previously worked as a consultant with the offices of the United Nations Development Program in Cairo and the regional office in Beirut. From September 2012 to June 2013, she was head of the Civil Society Unit at the Social Contract Center, a research unit affiliated to the office of the Egyptian Prime Minister.

Image: Photo: Shi'ite Muslim rebels hold up their weapons during a rally against air strikes in Sanaa March 26, 2015. (Reuters/Khaled Abdullah)