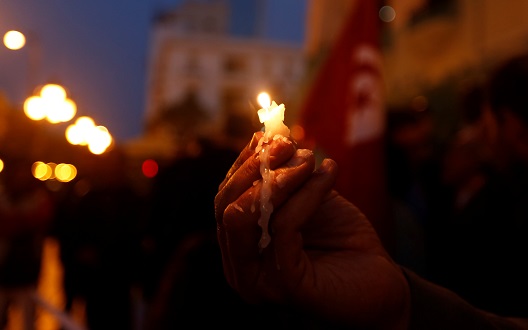 Photos: A man holds a candle as they protest against the twin attacks on Christian churches in Egypt, in Tunis,Tunisia April 10, 2017. REUTERS/Zoubeir Souissi

“My father and I still have headaches and a buzzing sound that has been in our ears since after the attack,” said the 27-year-old Ashraf Ramzy, a survivor of the explosion on Tanta’s St. George’s Cathedral that killed twenty-nine worshippers on Palm Sunday.

“The microphone made a really intense noise, then I was sure something was about to happen… I even thought of leaving the prayer,” he told MENASource. “It was 9:05 when the bomb exploded. I was standing next to my father behind a column, and we were ten steps away from the blast.”

Hours later, a suicide bomber detonated explosives at the St. Mark’s Cathedral in Alexandria and killed at least seventeen more people. The twin attacks injured dozens more, many of whom are still in hospitals.

Ramzy, who has grown up in Tanta and has been celebrating his holidays at the St. George’s Cathedral, described the scene this year as “horrific… everyone was scattering around, looking for loved ones… looking for a wife or for a son. Anyone that was far from sight could have been dead.”

Considering the bombing of the St. Peter and St. Paul’s church in Cairo, which had also killed at least twenty-nine people last December, Ramzy told MENASource that he had a feeling an attack such as this could take place.

Following the most recent Sunday attacks, President Abdel Fattah El-Sisi announced that a three-month state of emergency will be coming into effect. Sisi also added that authorities will establish a “Supreme Council to Combat Terrorism and Extremism.” On Tuesday, Egypt’s parliament unanimously voted to impose the state of emergency.

Commenting on the state of emergency, Ishak Ibrahim, a minority rights researcher at the Egyptian Initiative for Personal Rights, said that “the idea is that the solution isn’t in an emergency law, already existing laws could be used properly to remove discriminatory policies and hate speech.”

Ibrahim added that “when putting the most recent attacks into context of Egypt, part of the problem is that sectarianism, whether societal or institutionalized, is not taken seriously. The state is doing nothing to fight the roots of this discrimination.”

Egypt’s Ministry of Foreign Affairs wrote a status on its official Facebook page calling on people to use the hashtag “#united_on_PalmSunday” to show solidarity, which prompted anger from social media users who were frustrated from the government’s apparent inadequacy.

“The most important issue and question here is that of security,” Ramzy said, questioning, “Where is the security? Everyone has a role, and they have come short. Security [forces] should be held accountable before the terrorists themselves.”

Ibrahim told MENASource that since last December, “we can see that there has been a dangerous escalation in the intensity of the bombings and the intensity of which the Coptic Christians are being targeted.”

Referring back to the video in which ISIS claimed responsibility, Ibrahim explained that the Islamic State “has called for an open battle against Egypt’s Christians and it is possible we will continue [to see] a repetition of these incidents, especially if nothing is done differently [to combat them].”

Mina Thabet, who also a religious rights researcher at the Egyptian Commission for Rights and Freedoms echoed similar thoughts, saying: “There’s a huge question mark around the state’s strategy in combating terrorism.”

“From 2011 until now, these terrorist operations have moved from the borders and hot spots like Sinai to the heart of the capital and to the cities of the Nile delta. At the same time, there’s an increase in human rights violations happening on the premise that this is for the fight against terrorism.”

“The attackers are only gaining more confidence and expertise, and developing ways by which to kill more victims each time.” Thabet said, adding that this indicates that the state’s current strategies are unsuccessful and ineffective.

According to a Kuwaiti newspaper, one of the suspects in the Alexandria bombing was extradited from Kuwait for proven links to ISIS, but for unclear reasons, Egyptian security released him once he was back in Egypt.

“The state,” Ibrahim explained, “has a responsibility to protect its citizens.” However, “there is a clear gap. There’s clearly something faulty if in the past six months we have seen three bombings and Christians have been displaced from their homes in Arish.”

Thabet also suggested that there needs to be a comprehensive change in the strategy used to combat terrorism, “first we have to highlight that human rights violations will not achieve any form of security.”

According to Thabet, this comprehensive strategy “should ensure that the overall environment isn’t one of fertile ground for radicalization. This means acknowledging the discrimination that exists. It means ensuring social justice, a fair judicial system, a functioning educational system, and religious reform.”

“This doesn’t mean putting religion under more control, because this is what has been happening for the past thirty years and it has only created more terrorism – there needs to be more respect for people’s freedom of thought,” he said citing as an example the case of Islam El-Behiry, a TV host who had been detained on charges of blasphemy.

“We need an environment that is more open towards different ways of thinking and the government  needs to understand this,” Thabet said adding that, “Now Christians are the primary targets [of ISIS], but no one knows who is next.”

On Tuesday, Upper Egypt’s Minya Eparchy announced that Easter celebrations will be cancelled, “due to the current circumstances the country and the Church are witnessing.” The statement added that the Easter mass will be limited to prayers.

For Ramzy, who has been frequenting Tanta’s hospitals all week visiting his injured friends and relatives, the future is uncertain. “What can we do? Are we expected to stop praying? We’re not going to stop praying.”

Jihad Abaza is a freelance journalist and anthropologist in Egypt.