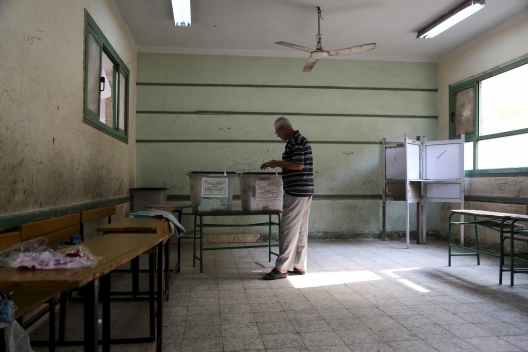 Just outside of Cairo, in the governorate of Giza, Saber Mamdouh, a calligrapher, sits in his workshop, worrying. Saber, who turned sixty a few days ago, says that election season was once a frantic time. He was in his workshop around the clock, working to supply candidates with signs and plaques for campaign rallies. “I don’t know what is going on with the elections this time. The workflow is weak and no one seems interested,” he says.

These parliamentary elections, which Saber says “no one is interested in,” are the first parliamentary elections in Egypt since the army toppled Muslim Brotherhood President Mohamed Morsi in July 2013. Since then President Abdel Fattah al-Sisi has had sole legislative authority issuing over 200 laws and amendments over the past almost year and a half.

A renewed sense of apathy to the electoral process has also been accompanied by several parties and movements calling for a boycott of the elections. The Muslim Brotherhood, the largest political movement in the country which dominated the previous parliament, is banned. Dozens of its supporters took to the streets in Alexandria on the eve of elections, but to little effect.

A number of parties, among them the centrist Strong Egypt, and several Islamist parties—Watan, Wasat, and Building and Development parties—have also decided not to participate in the elections. The liberal Dostour Party faced a rift over whether or not to participate, while the April 6 Youth Movement has said it is refraining from participating in what it described as a “political charade.”

A social media hashtag campaign, “Egypt will live with justice,” decided to drive home its point by nominating victims of the January 25 Revolution as members of parliament. One of the campaign founders—who preferred to remain anonymous—told EgyptSource, “The campaign is a clear message to the regime that these people [who died in the revolution or subsequent incidents] risked their lives for the aims of freedom and social justice and currently we think the regime is very distant from those aims.” She added, “We are facing farcical elections as the candidates who could have been categorized as revolutionaries have been eliminated.” Instead, she says, the prominent parliamentary candidates are, for the most part, a mix of businessmen, former military and police. Or they belong to the Salafi Nour Party, the only Islamist party to support Morsi’s ouster. By some estimates roughly 40 percent of the parliamentary candidates are former members of ousted president Hosni Mubarak’s National Democratic Party.

It would appear that the boycott, or at the very least voter turnout, have been cause for concern among authorities. Three days before the vote was scheduled to begin, talk show host Ahmed Moussa, an avid supporter of Sisi,urged the president to call on Egyptians to vote in the elections. He said, “People love you president and trust you. I hope you address the people and ask them to go to the ballots and cast their votes.”  Sisi himself did address the nation on Saturday, as Egyptians abroad began to vote. He called on “all Egyptians to actively participate” in the elections, emphasizing in particular the need for women and youth to vote.

A few days earlier a nationwide ad campaign was launched, calling on people to vote. The campaign cast the parliamentary elections vote as the final step in shaping their future, after voting in the constitutional referendum and the presidential elections. The campaign has been aired repeatedly on state-owned radio stations, and also featured heavily in morning talk shows on satellite channels. Another sign that the Egyptian state may have had concerns over the turnout was a statement issued by Dar-al-Ifta, the highest official religious authority in the country. The statement said choosing not to cast a vote is considered a sin.

After voting began, the government took some measures in response to the low turnout. The Cabinet, for example, granted public workers a half day off on Monday, the second day of voting. The Ministry of Local and Administrative Development also threatened to fine Egyptians 500 Egyptian pounds if they do not vote. This, however, is a common statement issued by authorities, and one that has never been enforced. In select areas, free transportation to polling stations was seen as another attempt to boost numbers.

Arguments Against the Boycott

Boycotting, or giving in to apathy, is not the best choice for everyone. Ahmed Fawzy, Secretary General of the Egyptian Democratic Party, describes boycotting as “the biggest mistake.”

He told EgyptSource, “The current situation is bad. We are deprived of the right to protest, our chances to appear in the media have dwindled, and political activity in universities is dangerous. In a nutshell there is no place to express ourselves politically at the moment except for the parliament, so we have to cling to the only option left.”

With just ten members in the parliament, Fawzy says, it would be possible to let people know the party’s position. “We can continue in the long battle for change against the regime,” he adds. According to Fawzy, those calling for a boycott believe they will reveal the unpopularity of the regime, and undermine its legitimacy. Fawzy says, however, elected parliaments don’t keep presidents in power. Mubarak, Fawzy explains, ruled for thirty years, not due to the support of the parliament, but rather through the use of power and oppression. Boycotting only favors the regime, he says.

Turnout on the first day of parliamentary elections was reportedly low, with figures for the second day said to be only slightly better. In the first phase, as fourteen governorates go to the polls, the largest among them Giza, Prime Minister Sherif Ismail estimated voter turnout on Sunday at around 15 or 16 percent on day one. Minister of Local and Administrative development estimated it somewhere between 11 and 15 percent. And while TV anchor Lamees al-Hadidy warns against prejudging turnout and results, Judge Abdullah Fathi, the head of the Judge’s Club quipped in an interview, that there were “no violations, breaches or quarrels,” before adding, “nor even voters.”