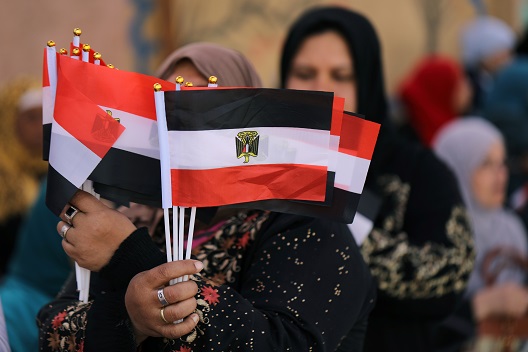 Polls opened at 9am local time on Monday, March 26th, in the first of three days of expected voting for the next president of Egypt. With Abel-Fattah El-Sisi projected to win against his only challenger, Moussa Moustafa Moussa from the al-Ghad Party, the incumbent government is pushing for the highest possible voter turnout to bolster the legitimacy of the election – Egypt’s third since its 2011 revolution. This will prove to be a challenge, however, as Sisi’s victory is so safely secured that he hardly campaigned, and “it is viewed by many in Egypt as a referendum rather than an election,” according to Egypt expert Mirette Mabrouk.

Since 2005, elections in Egypt have been contentious. Below is a brief overview of the past three elections courtesy of al-Jazeera.

Polls have opened in Egypt’s presidential election. Incumbent President Abdel Fattah el-Sisi is expected to win, with only one other candidate, Mousa Mostafa Mousa, remaining in the race https://t.co/CfqYWX94px pic.twitter.com/CgDFsI8buY

Egypt’s incumbent president Abdel Fattah al-Sisi, has cast his vote in an election which is widely expected to return him to power.

“The act of voting for a president who could, ostensibly, be voted out was a novelty. Hosni Mubarak served five six-year terms before stepping down in February of 2011, and Egyptians were keen on taking advantage of their new rights. This election, however, is likely to see a low turnout at the polls.” Read more of Mirette Mabrouk’s analysis of the election in her article ‘The President’s Scorecard’ on MENASource.

#AMAY | No sanctions on Egyptians choosing not to vote in elections: officialhttps://t.co/uLU5DkDzvD

#Egypt‘s presidential “election” is going on now. Here’s our quick synopsis of how serious challengers to current President Abdel Fattah al-Sisi were forced out of the race: https://t.co/mDdIndrHUA pic.twitter.com/gVdlipltra

Day 2: Tuesday, March 27
Follwing low to moderate voter turnout on Monday, voting got off to a slow start on the second day of Egypt’s presidential elections. Authorities continue to encourage people to show up to polling stations in high numbers, while opposition groups have called for a boycott of the elections. Election monitoring bodies have estimated that of the 59 million eligible voters, only 13.5 percent showed up to the polls on Monday. While it is unlikely that that rate will remain consistent through Tuesday and Wednesday, if replicated, overall voter turnout would close at 40 percent.

As the presidential elections kicked off in #Egypt, the Egyptian Cabinet’s Information and Decision Support Center rebuffed seven rumors that have preoccupied the public and the media #EgyptElection2018 @walaahuseen https://t.co/PekI3nR2jK

Egypt election: At this polling station in Cairo’s Dokki neighborhood, the judge in charge said roughly 500 of 2,880 eligible voters participated. When we arrived there wasn’t a single voter in the place. pic.twitter.com/3s8ETkmPKB

Update: we saw similar scenes repeated in four other polling stations. The highest turnout reporter at any of them was one third. There’s still one day of voting to go.

“I went to vote because I was waiting in line to pick up bread” being handed out by the army, a school teacher told Reuters by phone from his town of Sheikh Zuweid.

As the election has neared, officials have used a mixture of rewards, bullying and cajoling to boost turnout. This concerted drive has been undertaken by regional governors, community leaders, police, schools, clerics and businessmen, according to interviews conducted by The Associated Press.

Day 3: Wednesday, March 28
Following disappointingly low voter turnout on Tuesday, Egyptian authorities allocated incentives, such as financial payments and boxes of food, for eligible voters in hopes of attracting higher turnout. Government authorities in certain provinces, such as the governor of the Beheira province, offered to fix basic infrastructure shortfalls for whichever municipality had the largest voter turnout.

Authorities have also issued numerous threats to increase voter turnout. Egypt’s state news agency reported that those who boycott the vote would be fined 500 EGP. Board members from the street vendors’ union in Cairo were also threatened to ensure that their union members went to the polls, or increased government raids and confiscation of their goods by government officials and police would occur.

It’s interesting to see the reasons being:
a) usual ‘this is a national duty, shame on you for not fulfilling it’,
b) the regular instrumentalisation of religion for partisan politics, so that non-voting becomes sinful (Muslims & Christians)
c) Egypt’s international image.

An international delegation including US congressmen visiting Egypt to observe the controversial presidential elections were filmed smoking shisha and dancing in the Nile Delta governorate of Monufiya. The election has been dismissed as a sham by opposition leaders and rights groups, and a call for a boycott by the opposition was criticised by government supporters as tantamount to treason… The delegation however reportedly praised the vote.

With major election observation missions staying far away from Sisi’s plebiscite, Egypt appears to have recruited a random band of clueless foreigners pic.twitter.com/9FfRYotvW5

Sisi’s final official margin of victory is 97.08% of valid votes. He received 96.9% of valid votes in 2014. Once again his sole opponent came in 3rd in a two person race as spoiled ballots came in 2nd with over 7% of the vote. https://t.co/vY0b9sFyBB

Image: A woman carries national flags as she waits to cast her vote at a polling station during the presidential election in Cairo, Egypt March 26, 2018. REUTERS