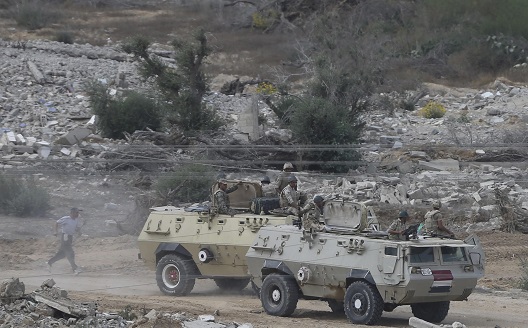 Egyptian soldiers keep guard during a military operation in the Egyptian city of Rafah, near the border with the southern Gaza Strip October 30, 2014. Egypt began clearing residents from its border with the Gaza Strip on Wednesday to create a buffer zone following some of the worst anti-state violence since President Mohamed Mursi was overthrown last year. A day after being ordered by the army to move, many in the area had already packed their belongings and begun to leave when an announcement from Cairo made the eviction official. (Photo: REUTERS/Ibraheem Abu Mustafa)

A state of hysteria has taken over Egypt’s psyche and dominated any semblance of rational thought following the most devastating terrorist attack on Egyptian soil since Mohamed Morsi was ousted from office. Last week in northern Sinai, jihadists killed twenty-nine conscripts and two army officers, leading to a massive counterterrorism response. The fear and insecurity resulting from the incident has led to further institutionalizing a security mentality throughout the state bureaucracy that further erodes freedom and civil liberties.

Soon after the attacks in Sinai, military experts—mainly former army generals—took to the airwaves and called for relentless bombing of towns in North Sinai where suspected terrorists hid. Others suggested extending the military campaign as far as Gaza where Hamas has allegedly provided illicit aid to extremist armed groups. Hamas’ suspected involvement gained traction in the media after President Abdel Fatah al-Sisi blamed “foreign parties” (without naming them) for the attack, fueling a conspiracy mindset that already grips the revolution-weary population. Prominent retired General Sameh Seif al-Yazal (among others) proposed the evacuation and destruction of all houses in Rafah along the border with Gaza in order to stop tunnel trade and crush the terrorists. The army obliged on October 28, carrying out the proposal to evacuate nearly 800 houses along the border between Rafah and Gaza. Despite promises of compensation and coordinated with tribal elders, however, local reports from Sinai indicate that soldiers rushed unhappy residents from their homes, giving them no time to make alternate arrangements. Some politicians and constitutional law experts have criticized the buffer zone, describing the relocation as a violation of article 62 of the constitution that guarantees “freedom of movement, residence and emigration.”

The media frenzy in the aftermath of the incident prompted owners, directors, and editors of the Egyptian media to issue statements vowing to “stand united behind the state and its army” and to ban any dissenting voices from airing their views on their screens or in newspapers as a demonstration of their patriotism. “We declare our support for all measures that the state will resort to in order to confront terrorism, and rejection of any attempt to doubt the national role of state institutions such as the army, the interior ministry, or the judiciary,” the statement issued by editors of print newspapers said. In doing so, the Egyptian media openly rejected freedom of the press in the interest of national security.

The Sinai attack stirred President Sisi to issue a decree on October 27, authorizing military protection for all powers grids, gas pipelines, railway lines, public buildings, roads, and bridges. Any attack on these structures would construe an act of terrorism to be tried by military courts—notorious for a lack of adherence to international trial standards. Several local human rights groups, including the National Human Rights Council (NHRC), cried foul, warning that this decree violated article 204 in the constitution that limits the mandate of military courts to cases involving army installations and personnel. NHRC Deputy President and Popular Socialist Alliance Party President Abdel-Ghafar Shokr also said that Sisi’s decree would lead to a sharp increase in the number of civilians sent to military trials. “This law means that if a civilian throws a rock at a government building, or any installation protected by the army, he would be referred to a military court,” Shokr said.

Egyptian Minister of Justice Mahfouz Saber, however, denied that Sisi’s decree violated the constitution, saying that article 204 includes attacks on army installations or personnel, “or similar institutions,” would be referred to military tribunals. He argued that when the army provides protection for either powers grids, railways, or universities, “they turn into military installations and violators would be referred to military courts.”

Sisi’s decree holds important political implications in the context of Egyptian universities, where Muslim Brotherhood students have held regular protests since the start of the academic year in early October, clashing with police on a daily basis. Minister Saber’s remarks would imply that any university under the protection of the military would also subject protesters to military courts. Authorities have arrested at least fifty students participating in demonstrations across the country since the Sinai attack. The Dean of Mansoura University, Mohamed al-Qinawi, said sixteen students arrested by the army on campus on October 28 would most likely be referred to a military court.

The attack in Sinai further intensified the zeal for national security within the judiciary. Several political parties and human rights groups have called on the government to rescind the protest law, which has resulted in imprisonment of democracy activists. But a Cairo court on October 26 sentenced twenty-three young activists to three years in prison for holding a peaceful demonstration in front of the presidential palace to demand the release of fellow activists. A day later,  another judge ordered the pretrial detention of twenty-four young activists—on trial for nearly a year—for holding protesting against military trials for civilians, including prominent activist Alaa Abdel-Fatah. Although human rights advocates have already come under the crosshairs for challenging the state, the judiciary’s treatment of activists suggests a bureaucracy on edge, more concerned for state security than for individual liberties in the wake of the Sinai attack.

Even prominent politicians are not immune to the effects of the highly securitized environment. Hamdeen Sabbahi, former presidential candidate and leader of the Popular Current, wrote a tweet  criticizing the ruling against democracy activists. other politicians and pro-government media sharply attacked his stance. Yasser Koura, leading member of the National Egyptian Front Party, known for its support for former President Hosni Mubarak, accused Sabbahi of “political obscenity,” saying that, “at a time our soldiers were slaughtered on our borders in Sinai, no one should speak about the protest law or those so-called democracy activists who want to destroy the country.” At a meeting at the Wafd Party headquarters on October 28, nearly all Egyptian non-Islamist parties announced that they would form a “united front against terrorism.”

The Sinai-induced anti-terrorism hysteria that has gripped Egypt has effectively placed security at the top of the agenda, with the military leading the effort. The fear has driven people from their homes, decimated an already hobbled press corps, intensified the politicization of court cases, and limited the independence of political figures. While some have voiced concerns that giving up democratic rights and freedoms would not lead to success in defeating terrorists, such shy calls fall short of influential ears amid a popular, state-backed war against terrorism.