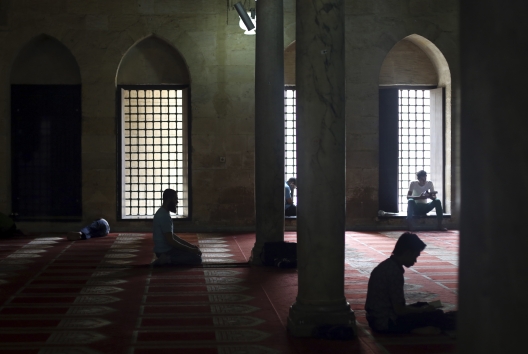 Egypt’s oldest Islamic establishment, Al-Azhar, came out in full force this week against what it claims is an organized plan to undermine its historic role in representing “moderate Islam.” After an initial complaint to the Free Media Zone Authority asking it to ban a controversial television talk show critical of traditional Islamic schools of thought failed, Al-Azhar filed official charges on Monday with the Prosecutor General against its presenter, Islam al-Beheiri, claiming that he insulted Islam, ridiculed revered religious figures, and undermined Al-Azhar’s constitutional role protecting and promoting Islamic teachings.

The controversial show, “Ma’a Islam” (With Islam), which has aired for over a year on privately-owned satellite channel, al-Qahira Wa al-Nas, deals mainly with what its presenter Beheiri describes as “faulty interpretations” of Islamic teachings based on the views of key scholars who lived in the early centuries of Islam. Beheiri says those strict interpretations are outdated and provide religious reasoning for extremist groups involved in acts of terrorism, such as the Islamic State (ISIS or ISIL) and al-Qaeda.

At a time when President Abdel-Fattah al-Sisi has appealed for “renewing Islamic thinking,” Beheiri’s show should have been seen as a useful tool. However, Beheiri’s criticism has been described by audiences as “personal insults” against prominent, Middle Age Islamic scholars. As a result, the country’s oldest religious establishment, Al-Azhar, said it felt it had to intervene. It was clear, however, that Al-Azhar also felt it could not remain silent because of Beheiri’s criticism directed at its leader, the Grand Imam Ahmed al-Tayeb. Beheiri condemned Tayeb for doing little, if anything, to confront extremist views, and for continuing to teach volumes of religious books, dating back over 1,000 years, that extremist and terrorist organizations use to justify their acts.

Al-Azhar leaders say Beheiri is only one example of a number of television presenters and journalists who repeatedly wage attacks against the religious establishment, not with the aim of fighting extremism and terrorism, but to undermine Islam as a religion and to demand a rewriting of its basic teachings. However, critics of Al-Azhar, such as television presenters Ibrahim Eissa and Youssef al-Husseini, not only criticize Al-Azhar for its archaic curriculums and failure to renew Islamic thinking, they also charge that Grand Imam Tayeb failed to remove hundreds of key Azhar scholars known for their support for the now-outlawed Muslim Brotherhood.

Al-Azhar spokesmen, such as Sheikh Mahmoud Mehana, a member of its highest decision-making body, deny that the establishment was ever dominated by the Brotherhood. “Our laws and traditions have established that Al-Azhar scholars should not be members of any group or political party,” Mehana said. “Besides, our Prophet teaches us that we should obey those leading the nation, even if he was a black slave. We love Sisi, we love the military establishment and respect the role of the military regime,” he added in an interview with a private television channel, Ten. Al-Azhar, however, has long been central to the Brotherhood’s struggle for power. Sheikh Abdel Rahman al-Barr,  for example, known as the group’s Mufti, was also a dean at Al-Azhar University. Al-Barr is now on the run for alleged involvement in acts of violence led by the Brotherhood after former President Mohamed Morsi’s removal, and faces charges punishable by death, if convicted.

Al-Azhar’s Student Union has been dominated by Brotherhood members for decades, and the fiercest and most violent clashes with police in protests following Morsi’s removal took place at Al-Azhar University. Several faculty members and assistant teachers were also reportedly arrested by police for trying to smuggle Molotov cocktails and fireworks to students at the university during clashes with the police.

In their talk shows, Beheiri, Eissa, and Husseini repeatedly pointed to top figures in Al-Azhar, including Grand Imam Al-Tayeb’s assistants, who are known for their sympathy with the Brotherhood, and who described Morsi’s removal by then-Defense Minister Sisi as a “military coup.” This included figures such as the Sheikhs Hassan Shafei and Mohamed Emara. Shafei, a longtime member of the Brotherhood who was jailed twice by President Gamal Abdel Nasser, is a consultant to the Grand Imam, while Emara, also a prominent Brotherhood figure, was appointed editor-in-chief of Al-Azhar’s monthly magazine.

There are also those, such as Abbas Shoman, the Grand Imam’s deputy, whom Eissa and Husseini describe as the stereotype of the traditional Azhar Sheikh ready to support whoever is in power. Shoman was a strong Morsi supporter, describing his opponents as “Western agents,” and “enemies of Islam.” However, as soon as Morsi was ousted, Shoman’s position shifted 180 degrees, and he became a critic of the Brotherhood and a strong supporter of Sisi.

The Grand Imam, Tayeb himself had a similar shift in position following the ouster of former president Hosni Mubarak. Tayeb was a member of the Policies Committee, part of the now dissolved former ruling National Democratic Party, and chaired by the president’s son, Gamal Mubarak. Following Mubarak’s ouster, Tayeb initially defended the former president, saying it was against religious teachings to rebel against him. However, Tayeb’s tone changed after Mubarak’s ouster, praising the aspirations of millions of young Egyptians seeking change and reform.

It seems it was difficult for the Free Media Zone Authority, that supervises dozens of privately owned television channels airing out of 6 October City, to shut down Beheiri’s show, as Al-Azhar had requested. This was likely due to the increasingly anti-Brotherhood sentiment, particularly in the media, and the persistent calls to renew Islamic thinking in order to rid the country of fanatic and archaic ideas that opens the door to extremism. Instead, Board Chairman of the Free Media Zone, Effat Abdel-Hameed, offered a compromise, issuing a warning to the channel airing Beheiri’s show, Al-Qahera Wal-Nas, to “review” the content of the program and to consider the views listed in Al-Azhar’s complaint. Beheiri said he was very happy with the decision, and that it proved that the Media Free Zone continues to respect freedom of speech, and did not to bow to pressure from Al-Azhar.

However, hours after the Free Media Authority announced its decision not to pull the plug on Beheiri’s show, Al-Azhar announced that it had filed charges against the talk show presenter to the Prosecutor General. Al-Azhar said his show “intentionally questioned the basic tenants of the Islamic religion, insults scholars who are widely respected, and stirs conflicts at a time the nation needed to unite all its citizens in support of their leadership in its effort to resurrect Egypt.” It has also publicly condemned some of Eissa’s stances, forming a committee to investigate the journalist, before deciding whether or not to bring blasphemy charges against him.

While Al-Azhar might have failed to stop Beheiri’s show, it continues to enjoy influence and respect among many ordinary Egyptians. Many Egyptians clearly supported the removal of the Brotherhood and continue to support the fight against extremism. The majority of Egyptians are seen as religious, and would not tolerate attacks against what they believe are tenants of the Islamic religion as well as historic scholars who enjoyed respect for centuries. The state would not also want to be seen as taking a stance against Al-Azhar, considering the role it had traditionally played over the past sixty years in backing any president in power.

Two months ago, Al-Azhar also proved its influence when Prime Minister Ibrahim Mahlab, reportedly agreed to remove former Minister of Culture, Gaber Asfour. Asfour, known as a sharp critic of Al-Azhar, claimed that the religious institution failed to respond to Sisi’s appeals to renew Islamic thinking. He also called for a serious review of books of centuries-old Islamic rulings that continue to be used today at Al-Azhar, and that extremists use to justify acts of terrorism, suppression of women and banning art.

While Al-Azhar failed to ban Beheiri’s show, its attacks against the presenter and other critics of the Grand Imam, Tayeb, are clearly a declaration that its leadership will not remain silent.  Al-Azhar has shown it will come out in full force to defend the prominent status that it has maintained over the past 1,000 years.

Image: Photo: Men pray and read the Koran at Al-Azhar Mosque, in the old Islamic area of Cairo May 8, 2014. (Amr Dalsh/Reuters)