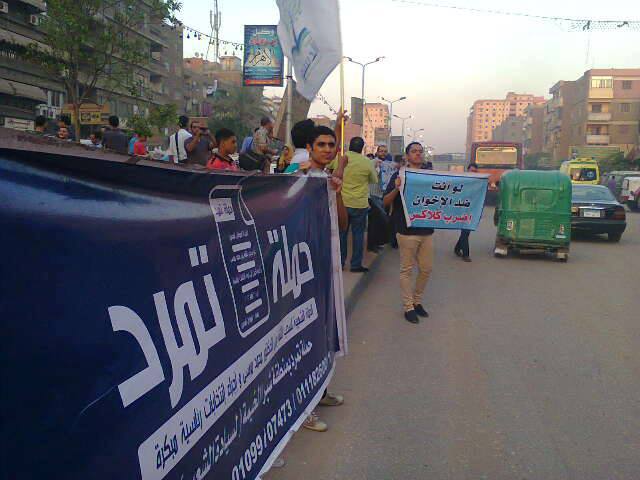 What began as a humble attempt to translate countrywide discontent with the way President Mohamed Morsi has governed Egypt, the Tamarod–or "Rebel" campaign–has mobilized millions of Egyptians for a protest that promises to be epic on the anniversary of Morsi’s inauguration. Although opposition forces initially kept the signature drive that demands Morsi’s removal from office and early elections at arms length, nearly all of the relevant players in Egypt’s transitional drama now recognize the campaign’s significance and potential to affect change. Movement within the political opposition, including coordination meetings with the campaign and youth groups for a post-Morsi transition plan, suggests a fundamental belief that the June 30 protests could realize Tamarod’s goal of replacing the president.

Islamists who support Morsi’s government, primarily from the Muslim Brotherhood, responded with a counter-signature drive of their own called Tagarrod–or "Impartiality"–to reiterate their faith (no pun intended) in the political system and the elections that brought him to power. Supportive Islamist groups have also called for a June 21 protest against violence. However, the counter-campaign’s attempt to balance the scales only seems to accentuate the country’s deeply divided polity. The Muslim Brotherhood and other pro-Morsi supporters have repeatedly vilified the Tamarod movement and some have gone as far as labeling those who turn out to protest on June 30 as traitors or unbelievers. Calmer heads within the Islamist movement have taken a more centrist position. The ultraconservative Salafi al-Nour Party has surprisingly demonstrated one of the most level headed attitudes with its promise to refrain from participating in protests, but urging the Muslim Brotherhood and the government to make concessions to opposition forces to diffuse the volatile situation. Abdel Moneim Aboul Fotouh’s Strong Egypt Party fell on the side of peaceful protests but stood firm against calls for a military coup to replace Morsi.

The revolutionary fervor and scathing vitriol between the two groups has gone beyond talking heads exchanging barbs in the Egyptian media. A number of violent incidents, not the least of which involved an arson attack by unknown assailants on one of the Tamarod offices in Cairo on June 7, and hours of clashes between Muslim Brotherhood and Tamarod campaigners in Alexandria on June 12, have heightened tensions between opposing ideologies in the days leading up to the planned mass demonstration and worried government security forces. The clashes involving attacks on Tamarod have prompted Interior Minister Mohamed Ibrahim to publicize its security plans for June 30, but interestingly confusing messages have come out of the ministry. Initial statements indicated a police withdrawal from demonstration areas but Ibrahim subsequently announced his commitment to protecting all citizens on June 30. Outraged Islamists called for Ibrahim to be held accountable for his initial refusal to protect Muslim Brotherhood headquarters and private property.

Other rumblings within the Morsi administration also indicate some fear within the government that impending protests may shake the foundations of the current system. Morsi reached out to the National Salvation Front for yet another national dialogue in an effort to subdue the rising tide but without suitable guarantees that any negotiations would lead to binding decisions, opposition leaders declined. Instead, Morsi met with the Islamic Legitimate Body of Rights and Reformation, an independent multi-party coalition of Muslim scholars that includes Salafi and Muslim scholars whose deputy chief threatened the opposition with counter-rallies on June 30. Tamarod members have taken a similar hardline stance, demanding nothing short of the formation of a presidential council and a technocratic government with an eye toward Supreme Constitutional Court (SCC) President Manar al-Beheiry to replace Morsi.

The scene is certainly set for what could possibly be a game-changing display of popular outrage. To hear either side of the political chasm talk of June 30, one might think an Egyptian Armageddon is right around the corner, with both sides bracing for an outbreak of violence. It is distinctly possible–even probable–that protests could come to blows. In past confrontations, it took little to provoke competing political forces into a street battle. Today, not only are the Ultras (the hardcore soccer fans who regularly clash with police) a factor, Black Bloc anarchists are also planning to join the protests adding to an already volatile mix, despite promises of nonviolent protests. "Popular committees" formed to prevent violence are just as likely to instigate as they are to prevent fights from breaking out. Even ordinary citizens, fed up with the dire economic conditions and a deteriorating quality of life, may have little patience for Islamists who may goad them into throwing the first punch. Some Egyptians who see no political or legal avenue through which to channel their disapproval have even admitted hopes of a confrontation to spark the army’s intervention and another round of revolutionary change. In this highly charged political climate, all it takes is one angry reaction to ensnare an entire country.

Hopes of such clashes ousting Morsi, however, run into some heady challenges. The Tamarod campaign managed to surpass its goal of 15 million signatures calling for Morsi’s resignation and snap elections. It rekindled the revolutionary flame sparked by its cross-party and youthful energy and captured the imagination of the silent majority in Egypt, but falls short of a legal avenue to realize a change in leadership. Currently, the constitution allows only a few ways by which to remove the president (articles 150 through 152): if the president falls ill or can no longer perform his duty; if he is charged with high treason and is subsequently impeached by at least two-thirds of the House of Representatives: if he puts his own presidency up to popular referendum: or if he voluntarily resigns. Anti-Islamist activists who argue that the constitution–by virtue of the highly flawed process of its formation–lacks the legitimacy to set appropriate standards for a post-revolution Egypt may be right, but neither opposition forces nor the judiciary have yet blatantly crossed the ambiguous legal boundaries that have guided (or misguided) it through its transition. The irony of Tamarod’s support for the SCC’s president to unconstitutionally lead the country is not lost on those paying attention. The judiciary, in particular, has remained conspicuously silent on the issue. However, judging by the SCC decision to allow the Shura Council to continue operating until a new parliament is elected, despite the court’s ruling to invalidate the council, suggests its unwillingness to rock the boat.

With all of Egypt’s dramatic twists and turns over the past two years, those who claim to know what will happen on June 30 will find themselves either wrong or lucky. The number of variables that factor into any one event outstrip the imagination every time. The truth is, no one can claim with any degree of certainty what might change after June 30, but Tamarod has certainly revealed how the deep polarization affecting Egyptian society at large might run deeper than previously imagined. It has tapped into a disaffected population that lost all faith in Morsi or that elections under his leadership could be free and fair. It has garnered the support of millions of Egyptians by avoiding the partisan politics that many citizens have come to abhor. Lastly, it has called on the aid of the army and the judiciary, the two institutions with the most support in Egypt, to lead the country to a new beginning. June 30 may amount to nothing more than a mass protest, but Morsi would be wise to take the advice of fellow Islamists, abandon the confrontational stance toward his detractors, and build the consensus that Egypt desperately lacks sooner rather than later. The countdown begins.