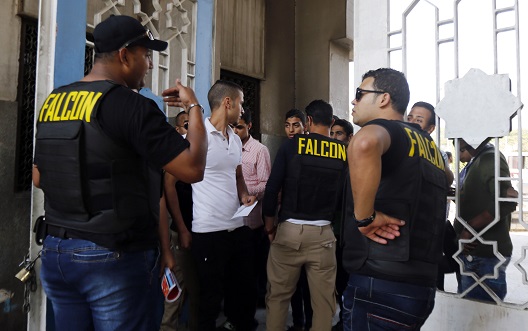 With a tumultuous academic year in 2013/2014 that left at least sixteen students dead, Egypt’s authorities have braced themselves for more upheaval. Weeks ahead of the start of the semester, measures have been put in place to control, or even eliminate, on-campus student activity. With the authorities and student movements both intent on escalation, it is difficult to imagine calm returning to Egypt’s university campuses in the near future.

With the ouster of Islamist President Mohamed Morsi and unabated calls for his reinstatement by his supporters, a pro-Morsi student movement soon surfaced: the Students Against the Coup movement. Most protests organized by the movement quickly devolved into clashes with security forces.

The Cairo-based Association for Freedom of Thought and Expression (AFTE) described the 2013/2014 academic year as “the most violent” in Egypt’s history. Security forces “stormed the majority of university campuses,” AFTE said in June, estimating at least sixteen student deaths during on-campus clashes.

At least 829 students were detained during the previous academic year. The most common charges leveled against them include protesting without a permit, illegal assembly, rioting, joining a terrorist organization, stalling traffic, possession of weapons, vandalism, and stalling work at institutions.

In addition to arrests, ten different universities expelled at least 370 students. In July, Cairo University head Gaber Nassar announced the expulsion of ninety-four students from the university accused of rioting and violence, exercising politics on campus, chanting against the armed forces and the police, attempting to stall the educational process, inciting strikes, and “breaching university traditions,” AFTE said.

The current academic year for Egypt’s universities started on October 11, following an almost month-long postponement. Since then, violence on university campuses has spiked. In an interview before the start of the academic year, Students Against the Coup Spokesman Youssef Saleheen said that the movement would hold more events than it did last year. “We will not cease protesting by any means, especially as hundreds of students remain in jail,” Saleheen said.

Mohamed Abdel Salam, a researcher at AFTE’s Student Observatory, described the situation in universities during the past week as worrying. “Last year started calmly then escalated over time,” he said. “This year, there hasn’t been a day without an incident so far.”

Student protests have erupted on a daily basis since the start of the academic year. On most days, protests turned violent in at least one part of the country. Omar Abdel Wahab, law student at the University of Alexandria, received a birdshot wound to the head during clashes between security forces and protesting students. He died in the hospital a week later.

According to AFTE, security forces arrested more than 200 students during the first week of the academic year, including seventy students arrested from their homes. Security forces broke into six universities during that week, AFTE added.

Eight local civil society organizations, described the arrests, in a statement, as a “broad crackdown” that targeted the leaders of Students Against the Coup and other movements. The organizations, including AFTE and the Arab Network for Human Rights Information, also accused the authorities of arbitrarily arresting other students in the vicinity of universities.

Cairo, Al-Azhar, Alexandria, Ain Shams, Zagazig, and Mansoura universities also witnessed widespread protests during the first week of the academic year. On October 14, two students and two security personnel were injured in clashes at Alexandria University. The same day, Minister of Higher Education Al-Sayed Abdel Khalek told the Supreme Council of Universities, “There is a faction of students intellectually and politically deluded,” adding that the ministry is attempting to communicate with them to amend their “flawed beliefs.”

The company lost EGP 30,000 in damaged property during the first two days of the academic year alone, Falcon CEO Sherif Khaled told reporters. Falcon’s heavy security measures provoked students, forcing them to line up to enter their universities. Students destroyed the electric gates installed by the security firm at Cairo and Al-Azhar universities on October 12; Cairo University evacuated its campus that day in reaction to the violence at the gates.

The cabinet also passed a presidential decree on September 24, allowing university chairmen to expel faculty members who “commit crimes that disturb the educational process.” Civil society organizations and faculty movements have widely criticized the decision, considering it a violation of the universities’ independence. The March 9 movement, an independent group comprising of faculty members, staged a protest against the decision at Cairo University on October 13.

AFTE’s Abdel Salam warned of the use of the new decree to settle scores with faculty members who may differ with university administrators on any number of issues. “The authorities are creating enmity within a subsection of academic society that was not part of the problem,” Abdel Salam added.

Cairo University’s Nassar also banned student political groups at the university. Nassar told state television that he took the decision to prevent “transforming the university into a space for political and partisan conflicts.” Abdel Salam, however, feels that the measure will only provoke students. “This leaves no mechanisms or channels available for the existence of peaceful and legitimate student activity within universities,” Abdel Salam said. Students Against the Coup’s Saleheen said that student activism “will not be affected by the newly adopted measures.”

The measures adopted by authorities at the start of the academic year and the excessive reactions to student protests during its first week suggest the authorities mean to clamp down on student activity in an unprecedented fashion. Abdel Salam says that the state is attempting to close the last remaining “open space” for protests.

Authorities have already orchestrated a tight crackdown on opponents of the military-installed regime since the Morsi’s ouster last year. In December 2013, the cabinet listed Morsi’s Muslim Brotherhood as a terrorist organization. The Brotherhood’s political wing, the Freedom and Justice Party, was banned through a court ruling issued in August.

Last November, a draconian protest law was issued to regulate peaceful assembly. The law, widely criticized by domestic and international human rights organizations, imposes excessive restrictions on the freedom of assembly. It obliges protest organizers to notify the authorities of their plans at least three working days in advance and gives the ministry of interior the right to move, postpone, or cancel planned protests.

Such legislation has severely hamstrung street activism. The Cairo-based Democracy Index reported 513 protests in September—just over half the number of protests reported a year ago. Hostility toward journalists and media practitioners has also taken its toll on press freedom. Reporters Without Borders claim at least fourteen journalists currently behind bars in Egypt.

Such hostilities have caused some prominent media celebrities to withdraw from the public scene. Political satirist Bassem Youssef announced the end of his show on June 2, one day before Abdel Fattah al-Sisi was declared Egypt’s new president. “The current atmosphere isn’t fitting for a comedy show or any other show,” Youssef said.

In light of the ever-narrowing circle of freedom, student activism remained the only form of protest capable of inching forward. The Muslim Brotherhood focused their own efforts to condemn military authorities on campus. Yet, the pattern emerging in the new academic year suggests that the government tolerance of student activism is finished—and with it, the last “open space.”

Rana Muhammad Taha is an Egypt-based journalist and worked with the Daily News Egypt for two years. Follow her on Twitter @RanaMuhTaha

Image: Personnel from Falcon, a private security company, conduct searches as students arrive for a new academic year at the main gate of Al-Azhar University during a protest conducted by a pro-Muslim Brotherhood student movement known as the Students Against the Coup, in Nasr City district October 12, 2014. Universities in Egypt opened on Saturday for the new semester with long queues due to increased security measures such as requiring students to present their identification cards and having their bags inspected, according to local media Al-Ahram's Arabic website. (Photo: REUTERS/Amr Abdallah Dalsh)