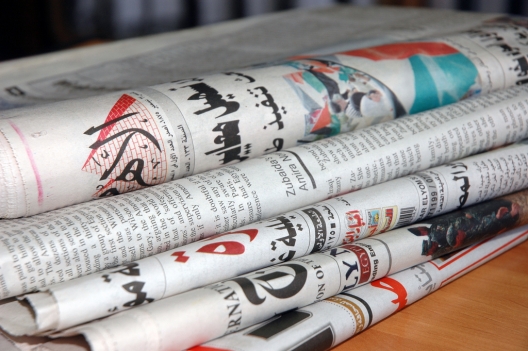 The terms “banned” and “terrorist” are once again affixed to mention of the Muslim Brotherhood in nearly all Egyptian media. State and private media alike tout the military-backed government’s lines. Newspapers and talk shows on TV, Egypt’s most popular medium, extol the military for reclaiming the revolution and sinisterly warn against traitors who dissent. All news and opposing views are vilified as pro-Brotherhood—and therefore dangerous.

It is no surprise that Egyptian media largely heralded the military’s assent and stayed silent as it cracked down on the Brotherhood and opposition voices: for decades, a toxic mix of political and economic interests have stifled the development of, and respect for, the mechanisms for independent and transparent media. Now, as Egypt passes the three-year mark since Hosni Mubarak’s ouster in 2011, many are bracing for how far this latest crackdown on media freedoms can go.

“We are in a downward spiral,” American University of Cairo Mass Communications Professor Rasha Abdulla said by phone from Cairo. “We are back to where we were under the Mubarak era, but now with the support of the masses.”

Longtime publisher and Mubarak foe Hisham Qassem, however, cautioned that the decline in media freedoms has been bad—but Egypt and the media scene have been too fundamentally changed to return to the previous state of repression.

“I don’t see this serious deterioration that a lot of people speak about,” Qassem said, who previously published the first privately owned Arabic newspaper, Al Masry Al Youm, in 2004. “I, probably more than other people, am aware of the serious handicap and problems media has in Egypt. But will media be gagged? Will things deteriorate? Never.”

Indeed, after the revolution, many Egyptian journalists were empowered to break old boundaries and demand their rights to freedom in the newsroom. Alongside the horizontal rise in new outlets and media spaces, however, journalists have struggled to change the shape of ownership and business models on top. Now, as support for Minister of Defense Abdel Fattah al-Sisi’s presidency intensifies, opponents are imprisoned, new heads of state media are in place, and more Mubarak-era men are acquitted of charges, the old order of media business seems to be regaining more and more power.

Politicized media configurations have long come at the expense of independent and sustainable coverage that empowers local journalism and responsible governance. Egyptian media has never been structured as profit-generating enterprises determined by free or fair competition. Rather, media outlets rely largely on political and business write-offs from the state and wealthy financiers. This propaganda-skewed model leaves consumer numbers and demands second tier to the proclivities of the ruling men on top, stifles a culture of innovation and transparency, and crowds out alternative voices and outlets.

Now, in the months since Morsi’s ouster, violence against journalists has also become an increasingly grave concern.

Under Mohamed Morsi’s antagonistic rule, hate speech and incitement to violence in Egyptian media intensified. Islamist channels like the Brotherhood’s Misr 25 and the Islamist al-Hafiz and al-Nas spewed anti-liberal and sectarian content, notoriously justifying the killings of Coptic Christians and Shia Muslims. In an increasingly polarizing sphere, state owned Arabic media played its storied role—largely reflecting the ruling party, in this case Morsi—and private media—much of it owned by men with ties to the Mubarak regime—responded with unabashed criticism of Morsi, his supporters, and much of the revolutionary movement. (Within these categories English-language media has historically had greater leeway.)

With impunity growing, Egypt is now the third most dangerous country for journalists, according to the Committee to Protect Journalists. Seven journalists died in the field from June to August 2013, compared to three in the previous two years. In the fall, two Egyptian journalists working in Sinai were apprehended in military courts. In December, four Al-Jazeera English journalists were jailed on dubious charges. During the January 25 commemorations, at least seven journalists were detained, while mobs attacked journalists, wrongly accusing some of working for Al-Jazeera. Tens more have been wounded, assaulted, or detained in the months since Morsi’s ouster. According to CPJ, at least forty-five journalists have been assaulted, and more than forty-four journalists detained since July. Countless other journalists have been fired or reshuffled for their politics—or fear that they will be.

Part of the problem is the mass hysteria—fed by state and media rhetoric—that has overtaken many Egyptians seeking stability after three years of domestic and regional unrest. Journalists —and in particular, Al-Jazeera—have become an accepted outlet for deepening anger and fear. Security leads to stability, goes the accepted line—and journalists complicate this equation. Within Egyptian media outlets, many believe otherwise, but the pressures to toe the line are strong.

The uptake in violence and threats coupled with weak media institutions has left journalists with few outlets to contest their rights. In addition to the overt political pressures, many journalists in recent months have lost their jobs as money dwindles in Egypt’s notoriously precarious, and corrupt, media market.  In conversations, local journalists consistently express the desire for more professional and ethics training—but access to these resources and genuine interest from those on top remains limited.

The Egyptian Journalist Syndicate (EJS), for example, has made professional and security trainings a priority, but continues to remain crippled by long-standing political and financial problems. (The EJS is the only constitutionally sanctioned union for journalists. In recent years, several alternative syndicates have formed to limited impact.) When the military violently dispersed the Raba’a al-Adaweya sit-in on August 14—killing four journalists—the EJS did not condemn the violence. EJS President Diaa Rashwan, a member of the Committee of 50 charged with redrafting the constitution, is a Nasserist and seen as more sympathetic to the military. Rashwan was elected last March in an election framed as a step towards the syndicate’s depoliticization—and the Brotherhood’s declining strength in professional unions, a key source of political power under Mubarak. Now one of Rashwan’s key campaign pledges—to increase the syndicate’s financial and political independence from the state—has again been compromised by political realities.

“Some people who criticize us have the right,” Syndicate board member Abeer Saadi said, referring to the Syndicate’s silence on August 14. One of Saadi’s close colleagues, Ahmed Abdel Gawad, was one of three journalists killed while reporting at Raba’a.. “We should have done more. But on the other side, some of the criticism came from people with different political views. So it is politicizing the media.”

The syndicate is still making some noise: the EJS issued a statement condemning the closure of the Brotherhood affiliated Freedom and Justice Party’s newspaper on December 26, and is considering journalists from Freedom and Justice for syndicate membership. But a sense of dissatisfaction and disenfranchisement is rampant.

Amid these tensions, the newly ratified constitution enshrines several improvements for press freedoms—though the degree to which they will be applied remains unknown.  Article 70 reiterates the right to media freedom and requires notification for opening up a new newspaper, thereby abolishing the politicized licensing regime enshrined in previous constitutions. Article 71 outlaws media censorship, with the exception of “times of war or public mobilization.” The constitution creates a new body for regulation media, removing control from the (now abolished) Shura council but leaving the exact division of power still unclear. Imprisonment for libel and defamation is abolished, except in cases of incitement, which can be broadly and politically interpreted.

While Egypt’s tumult has largely stalled much of the legislative process, commentators speculate that specific Internet laws will also likely be on the table soon. In 2012, Jordan amended its Press and Publications law to include new articles to curb Internet freedoms. Media activists around the region worry that Jordan, long commended for comparatively wider freedoms, will become the new model for restricting online space.

“The feeling under Mubarak was that this was just a lot of kids playing on Twitter,” said Abdullah. “The Internet is now a much more acknowledged media than under Mubarak.”

Online space has enabled new forms of collecting and sharing news—from citizen journalist groups like Mosireen to the news site Mada Masr. In a rising trend region-wide, however, several popular Internet users and politicians have also been brought to court based on tweets and Facebook comments. Just last week, liberal politician Amr Hamzway was charged with insulting the judiciary based on a tweet, and popular twitter user Ahmed Anwar was found guilty of insulting the Ministry of Interior and “misusing communication tools.” Then there is the notorious case of Abla Fahita, the Vodafone puppet accused of being a terrorist based on a commercial posted on YouTube.

With dark news days in Egypt looming, Qassem still maintains cause for optimism. Having fought Mubarak’s media regime for decades, Qassem predicted that it would take another generation for independent media to really break the mold—but that ultimately the trajectory cannot be stopped. “People are becoming more critical,” he said. Qassem described a forum he recently attended where a journalist from Al-Ahram described how orders were coming into Al-Ahram demanding certain content. “I said, ‘Excuse me, but Al-Ahram has always been like that… Just now you find more space and you are able to be critical. In the past you never were.”

As speaking politics with strangers again becomes grounds for suspicion in Egypt, the next few months will be a test of maintaining these newfound spaces for media freedoms — or finding new ways to again circumvent the widening red lines.