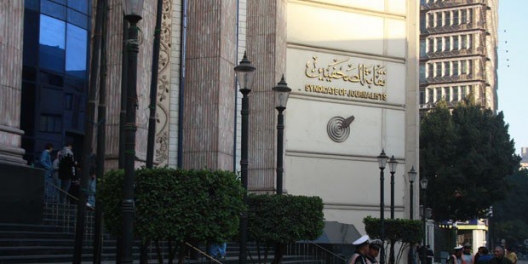 The headquarters for the Independent Union for Egyptian Journalists is a small office shared with a media rights group, just steps away from the Middle East News Agency (MENA), one of the main organs of the Egyptian government’s media machine in downtown Cairo. This way, explained founder Wael Tawfik in April, the syndicate can be close to the journalists it serves.

With the aging MENA building towering above, it’s also an apt image of the uphill battle that independent journalist syndicates continue to face four years after the 2011 Egyptian uprising brought hopes for serious media change. After an initial period of euphoria, over the past four years Egypt has become an increasingly dangerous place to report: at least ten journalists have been killed since 2011 and, according to a recent census by the Committee to Protect Journalists, the number of Egyptian journalists detained is at an all-time high. Within this regime of censorship, there is an ever pressing need for – and clear dearth of – institutions that can champion and protect the professional rights of Egyptian journalists.

Tawfik’s independent union is one of several journalist syndicates that have taken off in Egypt since 2011 as an alternative to the Egyptian Journalist Syndicate (EJS), the official body tasked with accrediting, organizing, and protecting journalists. They are also part of a wider worker movement across Egypt to create alternative bodies for those angry with or excluded from existing professional syndicates and labor unions.

Constitutionally, however, the EJS remains the only syndicate that can represent and accredit journalists, while corrupted membership rules and over-the-table government handouts have kept thousands of online, broadcast, and freelance journalists excluded from this politicized body. Journalists, for example, must be full-time at a print newspaper to attain the coveted syndicate membership, according to the syndicate’s bylines; the newspapers, however, are notorious for hiring and firing workers on short term contracts, making it hard for the average journalist to attain membership.

“What I see has happened in the recent period is that the syndicate has gone towards the idea that it is the only power and the only speaker for the profession,” said Khaled al-Balshy, a well-respected leftist journalist and one of the syndicate’s twelve elected board members. “From my perspective, I think that having more than one syndicate is the best way to protect journalists. Either they might be protected by the press syndicate, or they make another syndicate.”

In March, the EJS elected a new president, Yehiya Qallash, a long-time syndicate activist, over Diaa Rashwan, the pro-government incumbent, in an election local media largely lauded as a harbinger of syndicate change. Unlike Rashwan, Qallash has pledged to protect all journalists, not just those who are members.

Qallash also remains a staunch supporter of a united syndicate and against the idea of multiple bodies representing the field’s different kinds of journalists. The EJS needs to have a “dialogue” about the issue of electronic journalists being excluded in the syndicate, Qallash told EgyptSource in April, “in order to present a shared vision.” Qallash was frank about the current syndicate’s problems: it’s financially dependent on government handouts, excludes thousands of journalists, and is too often unable to protect journalists in the current political climate. But opening up competition to the EJS, which has solely represented Egypt’s journalists since 1947, is not one of Qallash’s battles.

“The syndicate is before a crossroads,” Ragaei al-Merghany, a long-time syndicate activist and recently retired state-run news agency editor, said in April. He echoed a warning that EJS leaders have been repeating since the 2011 revolution. “If the syndicate does not continue with a new powerful push to try and correct these problems, then maybe it will disappear from the life of Egypt’s syndicates and allow the way for real entities to express the demands and needs of the press.”

But Merghany was also not ready to relinquish the existing relationship that he knows. “The best is that I’d advise new journalists is to enter the syndicate,” he said. “They have the chance to change the situation.”

The revolutionary Tawfik disagreed. In 2011 he decided it was time to act and officially started the Independent Journalist Union after the revolution in order to provide an alternative space for journalists working in all mediums. In contrast with the EJS, in Tawfik’s union top media editors and owners alone are excluded from holding executive positions. The union initially attracted 200 member, twenty-five of whom were also EJS members. As of July, there were 623 members.

Still, it’s been a tough sell. The EJS initially opposed the union, verbally attacking and bringing it to court, according to Tawfik. The independent union provides legal service but has few funds to provide the kinds of financial services that the EJS can,such as deals on properties, discounts on health care and, most notoriously, a government-subsidized monthly handout equal to or more than many journalists’ salaries. Tawfik knows that these financial incentives for EJS membership are strong.  But he hopes to attract members interested in building a new kind of journalist organizing body.

The constitution, moreover, mandates only one syndicate per profession. So far Tawfik’s requests to become an official union have not been approved. But Article 93 of the constitution, he pointed out, provides an opening as it commits Egypt to international labor organizations that call for freedom for all professions to unionize. The 2014 constitution also directly guarantees not just freedom of the print press, but for the first time visual, audio, and electronic media.

“We are trying to figure out how to maneuver this legal space,” Tawfik said. One idea is that journalists be allowed to form different unions, which then all officially fall under the umbrella of the EJS as the single syndicate. So far however, the new and old syndicates and unions have shown little interest in integrating.

Sabour, originally from Tanta, started The Egyptian Online Journalist Syndicate after 2011 when multiple trade unions, though still not syndicates for professions like journalism, were legalized. He argued that the different kinds of journalists could each qualify as their “profession.” It was also, he conceded, a way to get noticed amid an increasingly cacophonous media scene.

Unlike Tawfik’s union, which is open to any full-time or freelance journalist, Sabour focuses solely on electronic journalists, who have largely remained excluded from the EJS. (Some electronic journalists have memberships because of the right connections or initial work in a newspaper.) He now has 1,200 members in the syndicate, compared to the EJS’ 6,000. Sabour’s union also cannot afford to provide financial handouts like the EJS, though he’s open to the idea of merging with the EJS eventually. To qualify, journalists must be able to show an archive of consistent journalism work, whether for an online newspaper or a magazine.

Unlike Tawfik, Sabour advocated for legislation to regulate Internet journalism, despite the risk of these laws increasing restrictions and erasing the relative more freedom online journalism has thus far provided. Describing himself as a Sisi supporter, Sabour also acknowledged that a balance between the current “chaos” and total government “restrictions” is difficult to find in the current political situation.

“There are restrictions on freedoms to a great deal in the period of President Sisi, but the rational for the restrictions is such that it’s not the right time to attack the president because the regime  is in a state of war against the terrorist,” Sabour said, echoing a common line of reasoning among Egyptians. “If the current restrictions continue for too long, however, then he warned there could be an even worse period of “suffocation.”’ What he would do in this case, Sabour did not say.

Tawfik and Sabour ideologically and professionally represent two very different strands of Egyptian journalist. Yet both, operating on seemingly parallel plans, have remained committed to trying to make the union paradigm work, despite that this storied model so far has remained a deferred vehicle for instituting media change in Egypt.

Miriam Berger is a freelance journalist who focuses on the Middle East, Africa and media. Miriam has previously reported for BuzzFeed World and is now also pursuing a masters degree at Oxford University. On Twitter: @MiriamABerger.