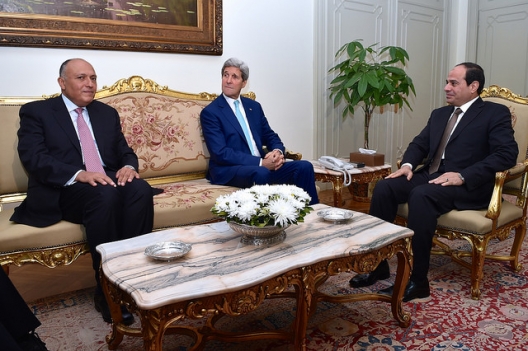 When US Secretary of State John Kerry visited Cairo following the beginning of the war on Gaza, Egypt seized the opportunity for self-aggrandizement, flaunting its importance to the United States and magnifying its position as a regional leader. In fact, Kerry was searched before he was allowed to meet Egyptian President Abdel Fattah al-Sisi; the search procedures were recorded and the video then broadcast as a “victory” for Egypt and a “strategic shift” within US-Egypt relations. In the months following, Egypt’s foreign policy under Sisi has slowly begun to take shape.

Thus far, Sisi has run Egypt as if it were a commercial enterprise, and this same logic has been applied to Egypt’s foreign relations and international politics as well. Domestically, Sisi has taken an approach of calling on Egyptians to endure, to be patient, and even to pay from their own pockets, in order to see results. While no one could have imagined that this line of thinking would become the formula by which the Egyptian economy would be administered, Egypt’s economic approach has gone from encouraging people to spend and invest in order to spur economic movement, to calling for people to donate their money to the “Long Live Egypt” fund, a fund about which no one knows anything. A similar approach has been seen in the crowdfunding tactics used to raise $8.5 billion for the Suez Canal Expansion Project, which also suffers from a similar lack of transparency.

No ideology or political values are currently driving Egypt’s foreign affairs, as was the case under Gamal Abdel Nasser in the 1960s.  At that time, Nasser defined the political spheres in which the nascent republic would take political action, beginning with the Arab region, then extending to the African continent, and finally encompassing the broader Islamic world.  Amid the global polarization between east and west, Nasser chose to remain neutral, displaying only moderate leftist leanings. His successor, Anwar Sadat moved Egypt into the sphere of influence of the United States in the 1970s. Hosni Mubarak, also realizing that funding the military and maintaining his power were dependent on US support, recognized that remaining aligned with the United States would provide support for his regime and ensure backing for Egypt. Mohamed Morsi maintained the same policy, even though the ideology on which this decision was based was drastically different. The Muslim Brotherhood sought international recognition—something they had never even dreamed of prior to the January 25 Revolution.  Accordingly, when the war in Gaza broke out, Morsi—seeking international legitimacy—exerted pressure on Hamas, which accepted this humiliating initiative from the Egyptians in return for concessions promised by Morsi, including the facilitation of the opening of the Rafah border crossing.  In the end, Morsi was able to present himself and the Muslim Brotherhood as effective and influential players in international politics and as the leaders of all Islamist political movements worldwide—as had been hoped.

The case of Sisi, however, is different. He came to power at a time when US-Egypt relations have been strained and he has found international support, instead, from Saudi Arabia and the United Arab Emirates. Under Sisi, Egypt’s stance towards the United States oscillates between two competing considerations. This first is that the United States is a major provider of military aid—a role linked to regional power balances rather than to the US stance towards the current regime. The second is that discrediting the United States allows Egyptian authorities to achieve illusory domestic “victories,” as was demonstrated by the public outpouring of delight caused by Kerry’s security check in Cairo.

The latter consideration was similarly the driving force behind the response of Egyptian authorities to the unrest in Ferguson, as daily protests in Missouri garnered global attention after the killing of an African-American teenager by a police officer. The Egyptian ministry of foreign affairs issued a statement urging the United States to exercise self-restraint, while the ministry of interior extended its advice to US police on how to deal with demonstrations.

Egypt’s foreign policy under Sisi is slowly beginning to take shape.  This policy is based on a mentality of isolation, rather than openness; on giving preference to material interests and offering military services to the highest bidder, as was the case with the 1991 Gulf War; and on maintaining chilly relations with regimes led by Islamists, such as Turkey and Qatar. Even Egypt’s stance towards these two countries reflects an impulse reaction to the positions they adopted in the wake of Morsi’s ouster, rather than an ideology or secret plan hatched by Sisi to eliminate extremism or counter the Islamist project.

Similarly, Egypt’s stance as a mediator between the Palestinian and Israeli delegations during negotiations to end the 50-day Israel-Gaza conflict, showed no interest on Egypt’s part to amend the ceasefire proposal to accommodate Hamas’ demands. Egypt’s stance instead appeared driven by its perception of Hamas as an extension of the Muslim Brotherhood. While Israel launched the war in retaliation for the deaths of three Israeli teenagers, and to destroy the tunnels leading from Palestine into Israel, the Egyptian authorities became involved in the war with the clear, publicly stated intention of eliminating Hamas, which has been declared a terrorist organization by the Egyptian government. As negotiations dragged on, Egypt refused for several long weeks to agree to the demands made by Hamas, accusing it of drawing out the conflict. One of the key demands made by Hamas was for the Rafah Crossing, the blockaded border between Egypt and Palestine to be opened.  In the end, however, this is precisely what happened.

Most recently—even as some are seeking to form an alliance to counter the militant group ISIS, which continues to make advances in Iraq and Syria—Egypt has been moving towards further isolation.  Egypt’s Foreign Minister Sameh Shoukry has clearly stated that Egypt has its own domestic terrorism to confront, and this comes despite reports revealing that Ansar Bayt al-Maqdis, a terrorist group responsible for countless attacks in Egypt in recent months, has been receiving guidance from ISIS.

Nonetheless, Sisi would need a stronger impetus than national security in order to get involved in the fight against ISIS.  The last time the Egyptian army took military action outside of Egypt’s borders was during the Gulf War. Due to its participation in the liberation of Kuwait, Egypt and its military received tens of billions of dollars and the United States and its allies decided to forgive $10.1 billion Egypt owed in debt. This was a main contributing factor resulting in Egypt’s economic boom in the 1990s, which in turn allowed Mubarak to remain in power for a record period of time.

Yet now, as Egypt’s foreign policy is moving towards further isolationism and as Cairo relies increasingly on Saudi Arabia for political cover and support, perhaps what Sisi needs is a bit of encouragement and further incentives, as occurred in 1990.

Ahmed Naje, a writer and journalist, works as an editor in the literary weekly Akhbar al-Adab.

Image: Photo: US Secretary of State John Kerry and Egyptian Foreign Minister Sameh Shoukry sit side-by-side as they meet with Egyptian President Abdel Fattah al-Sisi at the Presidential Palace in Cairo, Egypt, on July 22, 2014, to discuss a possible cease-fire between Israeli and Hamas forces fighting in the Gaza Strip. [State Department photo]