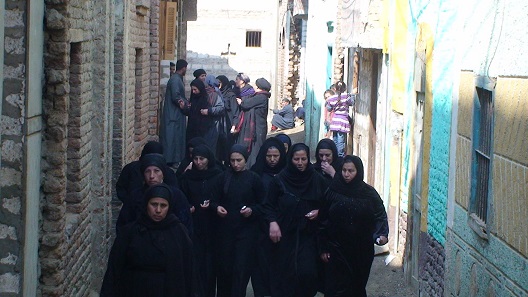 Over the past week, the village of al-Aour in the governorate of Minya—home to thirteen of the twenty Coptic Egyptian victims killed by the Islamic State (ISIS) in Libya—has been transformed. The once obscure village has become a site for official delegations and mourners to visit, and offer condolences and support to the bereaved families of the victims. This influx of visitors is new for al-Aour.

During the more than forty-five days between the abductions and executions, the governor of Minya did not visit the town or meet with the families of victims. While families did meet twice with an official from the Ministry of Foreign Affairs, they were not provided with any information.  The families also met with Prime Minister Ibrahim Mahlab two days before the video depicting their gruesome execution was published.

The twenty Copts were abducted by armed, masked men in two separate groups.  The first group was abducted when armed men stopped a microbus as it was on its way back to the Egyptian border. The armed men asked the passengers about their religions; upon finding that seven Copts were among them, they forced them off the microbus at gunpoint and took them away.  The second group was abducted several days later, when armed men raided homes where both Muslim and Coptic Egyptians were living, and forcibly took away thirteen Copts.

Atif Saad, a Copt who witnessed the second abduction but escaped, said, “We were in a state of fear and terror after hearing the news of the seven abducted Copts.  Some of us made preparations to leave and were awaiting appropriate conditions to return [to Egypt].  At dawn on January 3, armed men raided the area where we were living, and they had with them a list of names of the Copts who were there. They began knocking on the door of my room. I was afraid to open it, so I hid and did not move. They then pounded on the door of the next room, and when a Muslim man named Mohamed opened the door, they ordered him at gunpoint to call out the names of the Copts that appeared on their list.  When the Copts opened their doors, the armed men forced them into vehicles armed with heavy weaponry and abducted them.”

At first, ISIS did not declare its responsibility for the abductions of the Copts. It was not until January 12, that ISIS announced it had “captured 21 Christian Crusaders” in Tripoli. A month later, on February 12, it published pictures of the victims dressed in orange jumpsuits—the clothing worn by those who are to be executed by ISIS. Two days later, the video was published.

The town of al-Aour, like most towns in Upper Egypt, suffers from a lack of basic services. Most of its residents live below the poverty line, as there are no opportunities for work except farming, which is low-paid seasonal work, or working within the administrative apparatus of the state. For these reasons, many people leave al-Aour, preferring to travel to Libya or Jordan to work in construction.

In the grieving town, the families of the victims are overcome with mixed feelings, ranging from grief to contentment, from mourning the death of the victims to celebrating their martyrdom for the sake of their Christian faith.  The shock and feelings of sadness and pain have turned into contentment and belief, even pride and joy.

The wife of Magid Suleiman, who appeared in the video clip, sitting with their three children, said, “Some may ask why my husband accepted the risks of going to Libya, but they don’t realize that it was because the hardships that we face here are worse.” She added, “Our circumstances are difficult. There’s no work, and we have children who need to eat.  In Egypt, you might find work on one day out of ten.”

The families of the victims have criticized the performance of the government throughout the period between the abduction and the killing of the victims, describing it as slow, unclear, and insufficient. They are particularly critical of ambiguous statements made by officials from the Ministry of Foreign Affairs and the Crisis Management Committee, which was formed by President Abdel Fattah al-Sisi immediately after learning that the men had been abducted.  The families are further critical, as this incident is not the first of its kind: fourteen Coptic Christian Egyptians were also abducted and killed in Libya in 2014.  No steps were taken to ensure their rights, and the victims of the attacks received no reparations or aid, whether from the Libyan government or the Egyptian government.  The Egyptian government, moreover, did not seek to improve work conditions for Egyptians in Libya.

Ayad Attia, the father of another victim, Abanub Ayad, described the last time he spoke to his son: “In the last call, on New Year’s Eve, he was very fearful as he talked.  He said that he was unable to return, and that they were surrounded.  He said, ‘Dad, I can’t come home.’” Attia criticized the performance of the government over the course of these events, saying: “We pounded on all of the doors we could find in order to bring our sons back.  It was no use. We went back to the Ministry of Foreign Affairs twice, we sent appeals for help to all of the official bodies, and no one stood with us.”

Similarly, Bashir Estefanus, the brother of the two victims Samuel and Bishoy, says that the response that the families became used to hearing from the officials was that they were in communication with the Libyan government and tribal elders in order to determine the victims’ whereabouts, without providing any information about the work of the Crisis Management Committee. He adds: “If the state had had any concern or fear for our relatives, the state would have been able to find out their whereabouts and to free them – especially since they were abducted on two separate occasions.”

The government has partially succeeded in containing the resentment and anger over its role during the period between the abduction and the killing of the victims by issuing a set of decisions and measures to support the victims’ families. The National Security Council met, and Sisi spoke to the Egyptian people following the incident, announcing that Egypt would respond to the attack against its citizens. Some hours later, air force planes carried out air raids on training camps in the Libyan city of Derna, which is controlled by ISIS.  Mahlab also granted the families of all of the victims’ reparations of 100,000 Egyptian pounds, in addition to a monthly pension of 1,500 Egyptian pounds. He also promised to treat them as martyrs of the revolution. A public funeral was organized in the town of al-Aour, and it was attended by the Prime Minister, the Interior Minister, and a number of other ministers and officials.  During the funeral, it was announced that Sisi had approved the building of a church in the town, to be called “The Church of the Martyrs of the Faith and the Nation,” and the changing of the name of the town from al-Aour to “Qurayet al-Shuhada’” (meaning “Town of the Martyrs”).

Ibrahim Shehata, from the town of al-Gabali, home to one of the victims, welcomed the airstrikes, saying: “This is the first time that we feel that the government is treating us as equal to our Muslim brothers, because it has avenged our martyrs.”

Ibrahim Ayad, the brother of the martyr Abanub Ayad, received mourners in the Church of the Virgin in al-Aour. He said that he feels proud, because the victims died as martyrs, with their heads held high.  He thanked Sisi for taking action swiftly and avenging his brother.

In the midst of their grief, some of the families take pride in the victims’ adherence to their Christian faith and of how they accepted death for their religious identity.  This was demonstrated clearly when some of the women began to ululate, in an expression of joy, following the end of prayers performed at the time of death. The mother of one of the victims, Tawadros Yousef, asked for forgiveness for the killers, saying: “May our Lord temper them and enlighten their minds.” She expressed her happiness, saying: “I am joyful that I have offered my son as a martyr for Christ.”

Meanwhile, Tawadros’ wife says: “I am not upset, because my husband is in heaven. I am prepared to offer my three sons as martyrs, for we are not afraid, nor are we dismayed. I am proud that they have attained the crown of martyrdom, that they did not renounce their religion, and died smiling.”

Despite the steps taken by the government, there was anger that the governmental delegations only took the time to visit al-Aour, neglecting the five other villages which were home to the rest of the victims.  Ibrahim Anwar, a relative of one of the victims from the village of Menbal in the Matai area, said: “There is no interest shown except in the victims from the area of Samalout [where al-Aour is located].  People from here were martyred, too, but no officials came to our town or supported their families here.” He continued, “We want their bodies; we want to bury them. This is important for us in Upper Egypt, and the people are consoled by it.”

On the day the video of the execution was published, Sisi announced that he had made the decision to evacuate Egyptians from Libya and to facilitate their return to Egypt. While the government has announced the return of over 3,000 Egyptians from Libya, the Egyptian state institutions do not know the exact number of Egyptians who are currently in Libya, according to statements by the Central Agency for Public Mobilization and Statistics. No estimate is available for the number of Copts in Libya, and their whereabouts are unknown. Some sources have confirmed the presence of hundreds of Copts in the cities of Sirte, al-Saba’, Ajdabiya, Bani Walid, and Tripoli. This increases the challenges and pressures facing the Egyptian authorities in terms of evacuating Egyptians from Libya and ensuring their safe return home.

Ishak Ibrahim is a journalist and researcher focusing on religious minorities. He works for the Egyptian Initiative for Personal Rights working on issues relating to religious freedom.

Image: Photo: People mourn in the streets of al-Aour, a village in Minya, home to thirteen of the Copts who were killed by ISIS in Libya (Ishak Ibrahim)