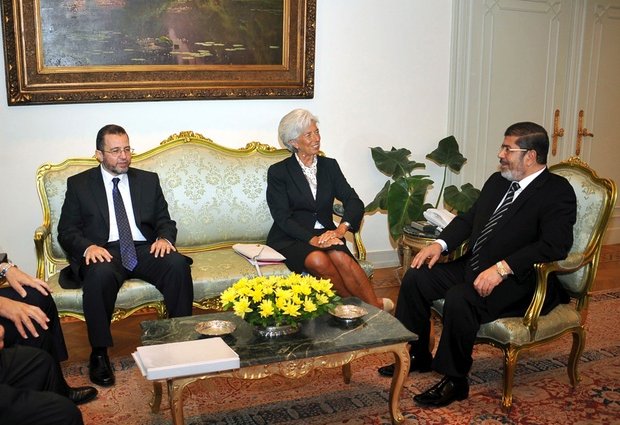 In the first test of how Egypt’s Islamist government will reconcile religious beliefs with a modern economic framework, the country is attempting to convince voters a contentious loan agreement with the International Monetary Fund is Sharia-compliant.

An IMF delegation arrived in Cairo yesterday to begin negotiations on a much-needed $4.8 billion loan.

The nation’s major political parties, including the Muslim Brotherhood’s Freedom and Justice Party, and the ultra-orthodox Salafi Al Nour party, have in the last few months signaled they would not oppose an agreement with the IMF, saying it is permissive under Islamic law.

But the IMF has distanced itself from any claim that the loan is Islamic, saying “it is not up to the IMF to determine whether its lending is Sharia compliant”.

“We can note, however, that the IMF’s lending terms are usually much more favorable than the terms available on the market,” an IMF spokesperson said in an emailed statement.

The loan is expected to have an interest rate of around 1.1 per cent.  It is seen as a vital step for the government toward building a legitimate reform program and a barometer of confidence for foreign investors and donors.

Analysts and economists say the government’s push to call the IMF loan “Islamic” could be viewed as an attempt to win over the general public and soften the blow of an agreement seen as controversial by some who view the IMF as having a reputation for imposing harsh austerity measures.

But the country’s worst economic slowdown in years is forcing Islamists to move beyond an impasse on the loan, which up until a few months ago was considered “haram” or forbidden because Islamic law normally prohibits the payment of interest.   Egypt is facing the Middle East’s widest budget deficit, an unemployment rate of almost 13 per cent and dwindling foreign reserves that are down to just $15 billion, half the level they were before the uprising last year.

The Islamist government is also desperate to prove it can revive the country’s economic fortunes, and earlier this month the country’s president Mohammed Morsi sought to reassure conservatives saying “this [loan] does not constitute Riba,” in reference to abusive interest rates as defined by Islamic rule.

Gehad Al Haddad, senior advisor to the Muslim Brotherhood and a member of the steering committee behind the group’s Renaissance project, said the group views the loan’s interest rate as a “loan processing fee” making it permissive under Islamic law.

“The usual interest on such loans will not be applicable but rather what is termed as loan processing fees, thus canceling their interest nature,” Mr. El Haddad said.   This will be considered “an admin fee” which is acceptable in Islamic Sharia law, he said.

“The second aspect is that this is a fixed amount calculated at a negotiated [rate that is] less than 2 per cent of the loan value,” he added.

Meanwhile the Nour party’s approach to the IMF loan is to view the easy interest rate as much more favorable compared to the sizeable level of conventional borrowing Egypt is currently undertaking at a far higher cost.  The government is relying on domestic banks to purchase government debt at yields as high as 16 per cent to help plug the deficit.

“Last year when we said we shouldn’t take the loan the situation was different.  Now we’re using the idea of ‘mudtar’,” said Tarek Shaalan, head of the Nour party’s economic committee, referring to the Arabic word for ‘compelled’ that is used in Sharia law to express the idea of a last resort.

Mr. Shaalan said under the current severe economic conditions, it is “acceptable to take the loan with lower interest rates against those with higher interest rates, and that makes it Sharia-compliant”.

Economists are skeptical, however, about how a loan from the IMF, which has entered into agreements with Islamic countries such as Pakistan, can be structured under Islamic law.

“Unless the IMF loan has been fully restructured into a commonly accepted form such as a ‘murabaha’, the ‘fee’ approach would not be enough to make it fully permissible according to most scholars,” said Emad Mostaque, strategist at Religare Noah, the London-based investment bank.

“Otherwise nobody would bother with Islamic structuring,” he said.

“It is a bit silly to expect Egypt to be more Islamic than Saudi Arabia, which also issues conventional loans,” he said.

Farah Halime is a business reporter based in Cairo and the editor of Rebel Economy, a blog focused on how Arab economies are rebuilding after the "Arab Spring".