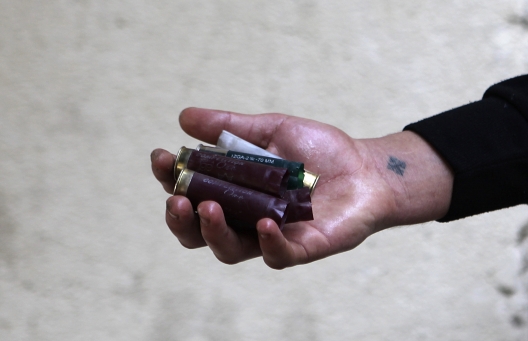 Three years after the January 25 uprising, little headway appears to have been made for Egypt’s marginalized, according to minority and rights groups. Minorities have been subjected to long-standing discrimination in Egypt’s modern history, which became increasingly apparent under Gamal Abdel Nasser. Under Islamist President Mohamed Morsi, and in the wake of his ouster, minorities were subjected to violent attacks including the mob lynching of Egyptian Shias, the torching of Christian churches and Bahá’í homes, and an attack on the headquarters of the Coptic Orthodox church in Cairo.

“The period under the Muslim Brotherhood’s rule was historically the worst for Egypt’s minorities,” according to Youssef Sidhom, the managing editor of Watani, a Christian newspaper.

Most minorities accordingly perceive the country’s new President, Abdel Fattah al-Sisi, as a savior from the oppression of the Muslim Brotherhood. Aspirations of a homeland for all were revived; famed slogans used during the 1919 revolution ‘Religion is for God and the homeland is for all’ were re-introduced. This perception is an added responsibility for Sisi who evidently has a mammoth task ahead as indicated in the report ‘No Change in Sight: The situation of religious minorities in post-Mubarak Egypt’ by Minority Rights Group International (MRG).

“Impunity, prejudice and legal obstacles, which were rife under the authoritarian rule of President Hosni Mubarak, have yet to be addressed,” says Chris Chapman, MRG’s Head of Conflict Prevention. Other official reports by the UN’s Committee on Economic, Social and Cultural Rights and Amnesty International, as well as victim accounts further confirm the ongoing social inequalities minorities face post revolution.

Experts identify government policy, restrictive legislation, security forces’ inaction, a negligent media and an increase in sectarian rhetoric, as collective triggers behind growing sectarian divisions and insecurity since 2011. In addition, a lack of accurate demographic data complicates analysis on the predicament of minorities.

“The lack in demographic data on minorities in Egypt is a phenomenon of the Middle East, as state’s seek to avoid the political demands associated with a quota system,”  Political Sociologist, Dr. Said Sadek explains.

During the transition period, Copts who represent Egypt’s largest minority, approximated at 15-18 million of the country’s estimated 86 million, according to the Copts of Egypt Coalition, have been at the center of sectarian attacks. Sidhom details the issues facing Egypt’s Christians: restricitive legislation restricting the building and maintaining of churches, unequal citizenships rights and inaccessibility to chief executive posts and candidature in electoral bodies.

Slight progress has, however, been made since the popular removal of the Islamist leader; Christians have been subject to terror attacks alongside the state security services. The destruction of an estimated 86 Churches, mob attacks, drive by shootings, and countless brutal killings, many of which occurred in the Upper Egyptian governorates of Minya and Dalga, are indicative.

Egypt’s Shia, whose population remains unknown since national statistics do not differentiate between Muslim schools, represent another persecuted minority as per the National Council for Human Rights (NCHR) report in 2009-10. Experts suggest sectarianism intensified post-revolution owing to tensions with Iran infused by the Brotherhood’s ideology, as well as concerns of the faith spreading and threats to national security. This translated into bloodshed as four Shias, including a cleric, Sheikh Hassan Shehata, were killed in a public lynching in the village of Abu Musallim in Giza.

“Unfortunately there has been extensive brainwashing against Shia; our premises have been raided owing to our religious conviction,” explains a young Egyptian Shia who requested anonymity for security reasons.

The Bahá’í, whose presence in Egypt dates back to the nineteenth century and are estimated to be between 1,500 to over 7,000 by MRG, have not escaped victimization. Like the Shia, sectarian rhetoric used among some Salaﬁ leaders accuses the Bahá’í of being a threat to national stability. Fear and trepidation escalated in February 2011 when Baháí homes in Shouraneya, in the Upper Egyptian governorate of Sohag, were torched. At the time, rights groups alleged security forces played a role in the attack. Legislative discrimination persists, as the state continues to disregard the group’s faith, marital rights and Bahá’í personal law despite recent lobbying attempts.

Sufi Muslims, estimated to be at least 15 million according to MRG, have also faced increasing bias. Over 100 attacks against shrines have transpired since the January 25 uprising according to the Secretary-General of the Union of Suﬁs in Egypt. The third attack on a Sufi Mausoleum in North Sinai on the June 14, 2012 is an example of many.

Sectarian strife may also adopt a gender dimension according to the British Foreign and Commonwealth office. “Egypt has witnessed an upsurge in sectarian violence over the transition period, and we are also aware of reports of abuse against women from religious minorities,” it stated. In this regards Coptic activists such as Ebram Louis, refer to cases of abduction of Coptic girls and women.

Minorities and the Constitution

Although religious liberties have been ostensibly acknowledged by the constitution since Egypt’s independence, supporting legislation either fails to be upheld, or itself is discriminatory. Furthermore, Egyptian identity is associated with Islam, a linkage that strengthened over time. In the 1923 constitution, Article 149 stated ‘Islam shall be the state’s religion.’ This article was then elevated in the 1971 Constitution by Anwar Sadat to Article 2and reinforced by the declaration “Principles of Islamic law are the principal source of legislation.”

The 2012 Constitution drafted under Morsi’s leadership also incorporated the clause alongside a novel article linking Sharia to an overtly Sunni jurisdiction. The charter was passed and restrictions against religious freedoms went unchallenged.

Encouragingly, following Morsi’s removal, the 2014 Constitution removed the new article, reduced Al-Azhar’s position in determining legal codes, and offered some minor concessions, only to recognized minorities. Christians were also guaranteed a modest quota, but only in the first parliament, to be elected after the ratification of the constitution. While these improvements have been welcomed by Egypt’s marginalized, experts suggest alterations are futile without the application of laws.

Furthermore, whilst the 2013 amendments display some progress for Christians and Jews, other minorities remain forgotten. Since Sharia continues to be the fundamental source of legislation and personal law only endorses ‘heavenly religions’ (Islam, Christianity and Judaism) other religious minorities legislative rights are entirely neglected.  The state’s official disregard of the Bahá’í sect exemplifies this.

Sisi’s plan in this respect is yet to be disclosed, though he has openly expressed his intent in a recent interview for an all-inclusive Egypt.

“We will try to offer a comfortable climate for everyone.”

After just having taken office, with a newly elected cabinet and no parliament to date, analysts like Sadek remain confident that Sisi will address all minority issues in due course. Described as a man of action and little words based on the events following his first appearance in the public arena, despite ongoing concerns about minority rights, Sisi has reinstated a renewed sense of optimism amongst Egyptians and the country’s minorities.