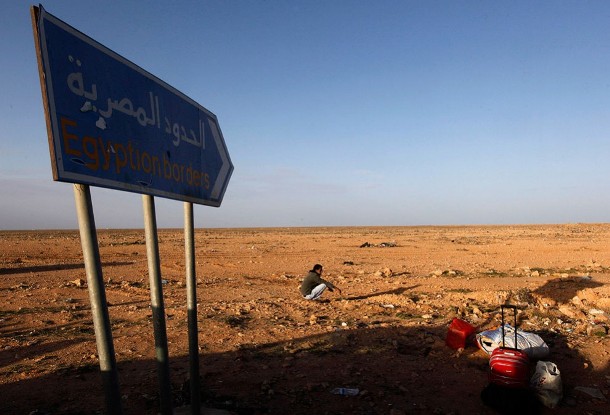 The results of the Libyan elections have come through. Contrary to the tide that saw a rise of Islamist parties across the region, the Islamists in Libya failed to garner a majority. Instead a secular party started by Mahmoud Jibril, a senior official in the Gaddafi government who joined the rebels early in the 2011 Libyan uprising scored a resounding victory. The assembly that will be formed through these elections will write Libya’s constitution over the next 18 months.

Jibril’s win is not solely a Libyan affair. Libya is after all potentially one of Egypt’s most strategic allies. Prior to the Libyan Civil War an estimated 1.5 million Egyptians lived and worked in Libya (in addition to another million or so African and Asian workers). This figure is only a little less than the number of Egyptian expats living and working in Saudi Arabia. Prior to the 1990’s, relations between Libya and Egypt weren’t smooth sailing. Following a brief war between Libya and Egypt, and the expulsion by Gaddafi under threat of arrest of the quarter of a million Egyptians living in Libya, relations remained cold for years.

Today, Libya’s relatively small population, coupled with its enormous wealth makes it the equivalent of an oil rich Gulf Arab State sitting right next door to Egypt. According to the CIA World Factbook Libyan GDP reached $92 Billion in 2010. Just prior to the 2011 Libyan Civil War, oil production reached 1.49 million barrels per day, a figure that is expected to grow significantly in the future. Furthermore, Libya’s Minister of Labor, Mustafa Rujbani, told Egypt’s Al Ahram that his country plans to recruit one million workers from Egypt. Even more astounding was the amount of the current Libyan investments in Egypt, which the Minister put at a staggering $21 Billion, a figure that dwarfs all Gulf States pledged investments put together, and is more than double what Qatar plans to eventually invest in Egypt. (Saudi’s investments in Egypt today stand at $27 Billion.)

Egypt’s astute Muslim Brotherhood will certainly be mindful of these significant figures and will accommodate whichever government is in place in Libya. The Brotherhood perhaps expected its Libyan counterparts, including Ali Sallabi and Abel al-Rajazk Abu Hajar, to lead their giant neighbor. Instead, Egypt’s new government will have to deal with Jibril, a leader who is openly critical of Qatar, Egypt’s main Gulf financial backer. Jibril, potentially Libya’s next president told Saudi Arabia’s Al Arabiya news channel that Qatar was “trying to play a role that is bigger than its true potential,” hinting at Qatar’s wealth and the role of Al Jazeera. Over the past few months Al Jazeera Arabic has been championing Islamist parties, especially the Muslim Brotherhood, raising the ire of numerous Libyan officials and citizens.

For Egyptians, competition for Libyan jobs will be intense. According to a study by the African Development Bank, Libya could absorb between 200,000 and 500,000 Tunisian workers within the next two years. Neighboring Tunisia had hosted up to 900,000 Libyans during the 2011 revolution. Presently, due to racial tensions and deteriorating relations, workers from Sub-Saharan Africa and Algeria respectively may not enjoy the same equal employment opportunities in Libya as Egyptians and Tunisians.

Despite assurances on Gulf security made by Egypt’s Muslim Brotherhood president, in the long term, Egypt’s economic future will lie in tighter cooperation with its Mediterranean neighbor, Libya, not in the contentious waters of the Arabian Gulf, save perhaps for its Red Sea neighbor, Saudi Arabia. The Qataris, who today host 130,000 Egyptians will never be able to provide the job opportunities that the Libyans are offering. The influence of the Qatari government-funded Al Jazeera Arabic will continue to retreat with the proliferation of news channels, including those dedicated to Egypt. The Egyptian Brotherhood, who has benefited from the Qatari media and financial largess, is rapidly rebuilding ties with Gulf regional power Saudi Arabia, a state which oftentimes finds itself at odds with its smaller neighbor Qatar.

Although Qatar is also growing at an impressive rate it is unlikely to provide economic opportunities for Egyptians on the scale of Libya due to its small size. Moreover, no matter how keen Egypt’s Muslim Brotherhood appears on relations with Qatar, the truth is these ties will always take a back seat to relations with Saudi Arabia, which President Morsy has publicly placed ahead of other Gulf States in rhetoric and action. In fact, for Egypt’s Muslim Brotherhood’s strategic interests, Qatar may not even rank in the top five Arab states in the long term, falling behind Algeria, Tunisia, Saudi Arabia, Libya and post-Bashar Al Assad Syria. For its own part, like its smaller Gulf neighbors, Qatar may also eventually reconfigure its foreign policies to fall in line with Saudi Arabia, as it has done before.

One possible hindrance to any Egyptian government-led initiative in Libya is the suspicion Libyans have towards Islamist parties in general, which was manifested in their election results. Also, Libya’s worrying tribal violence may turn into a major impediment to economic development plans.

Egypt’s Muslim Brotherhood government will hope to provide job opportunities for as many Egyptians as possible, whether internally or in Saudi Arabia, Libya or Qatar. It will also probably strive to avoid any deterioration of relations between possible mass-employer Libya and media and financial supporter Qatar, between whom it could act as a bridge. If Egypt’s Brotherhood succeeds in smoothing out relations and directing both nations’ significant financial capabilities into joint projects in Egypt and the region, it would have scored a major diplomatic and strategic coup.

Sultan Sooud Al Qassemi is a UAE based political commentator. He tweets as @SultanAlQassemi