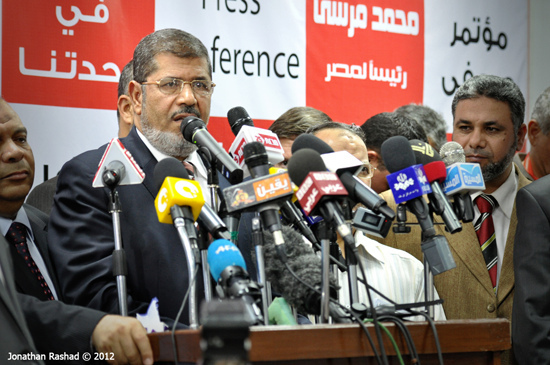 The Muslim Brotherhood is trying to duck legal challenges to its organization by registering itself as a non-governmental organization (NGO), but its efforts will leave the group vulnerable with the same legal framework that threatens the future of civil society in Egypt. Discussions in the Shura Council suggest another Islamist-driven push for legislation that will severely restrict civil society activities and that of their international partners. The convoluted legal maneuvering that designates the group’s new status as a civil association amounts to nothing more than a bandaid solution to the Brotherhood’s immediate woes and could come back to hurt the group. The draft of the NGO law, as written, opens the door to even more legal challenges and increased state influence over its activities. It begs the question, why not fix the law for everyone’s sake?

Four cases filed by lawyers hostile to the Muslim Brotherhood aimed to dissolve the Muslim Brotherhood on the basis that it lacks formal registration as a legal entity and called for confiscation of its assets and closing its headquarters and branch offices. As a newly registered NGO, the Muslim Brotherhood dodged the proverbial legal bullet, relying on provisions of the new constitution (that allow NGOs to form only by notifying the Ministry of Insurance and Social Affairs) and eliminating the basis for the court challenge. Despite this move, Brotherhood legal experts must no doubt realize the precarious situation in which they placed themselves. As a nonprofit organization, the Brotherhood now finds itself operating under the restrictive Mubarak-era NGO law 84 for 2002. Under this law, NGOs are prohibited from taking part in politics, and engaging in or funding elections-related activities. The Muslim Brotherhood blatantly violates this provision of the law by funding the Freedom and Justice Party and mobilizing voters.

The old NGO law will pose a threat to the Brotherhood’s operations unless a new law comes into effect. Not coincidentally, the Human Development Committee of the Islamist-dominated Shura Council has prioritized a review of this law and the flurry of activity surrounding it has left civil society on edge. Just recently, the Shura Council has agreed to a Ministry of Social Affairs/FJP-drafted law “in principle” but has yet to pass the new legislation until it can resolve differences between it and another draft submitted by the Ministry of Justice. One might find it noteworthy that, despite the Shura Council’s consultations with representatives of civil society over the antagonistic provisions of the law, it has all but completely ignored suggestions or an alternate draft law proposed by civil society groups.

In a confusing twist, the Muslim Brotherhood leaves itself exposed to the highly restrictive provisions of the new draft law. Freedom House describes the most upsetting flaws, explaining how it “nationalizes civil society organizations by defining their funds as public money.” It also severely restricts foreign funding, imposes prohibitive fees, and exiles government-funded foreign NGOs from the country. Some speculate that this draft reflects the will of the security apparatus, keen on tempering the ability of civil society to shine a light on government wrongdoing. .

The last time this sort of legal maneuvering occurred, the Islamist-dominated constituent assembly faced legal challenges in the Supreme Constitutional Court that might have dissolved the body, setting the constitution-writing process back considerably. The threat to Morsi’s plan for Egypt’s future charter induced a marathon session of the assembly that plowed a far-from-perfect constitution through the process to a public referendum and ratification. The resulting breakdown in consensus contributed to the current political gridlock that has turned violent on a number of occasions. The parallels between this case and that involving the dissolution of the Muslim Brotherhood hold serious ramifications for the legal regime that may soon govern civil society in Egypt, one of the few checks and balances on government power that remain.

Given the blurred lines between the Morsi government and the Muslim Brotherhood, the group is betting on its ability to control the interpretation of the impending NGO legislation, but antagonistic forces could easily turn it against the organization if it loses executive or political control. Between the Muslim Brotherhood’s frosty relations with the Egyptian judiciary, the government bureaucracy, and the political opposition, any number of power brokers could turn this law against the group. One the one hand, it subjects the Brotherhood to an unprecedented degree of transparency that may help expose long held questions surrounding sources of funding. On the other, it eviscerates civil society – and with it the prospects of independent checks on power. The railroading of the draft law through the Shura Council suggests a bizarre, ad hoc approach to governance that could further damage Egypt’s transition. Perhaps before he signs the draft into law, President Morsi will realize that a more progressive, open, and independent civil society will benefit everyone. Especially, the Muslim Brotherhood.

Tarek Radwan is the associate director for research at the Atlantic Council’s Rafik Hariri Center. He previously reported on the Middle East with Human Rights Watch’s MENA division and served as a human rights officer for the United Nations/African Union Hybrid Operation in Darfur. Mr. Radwan specializes in Egypt, with a focus on civil society, human rights, the constitution, and judicial issues.