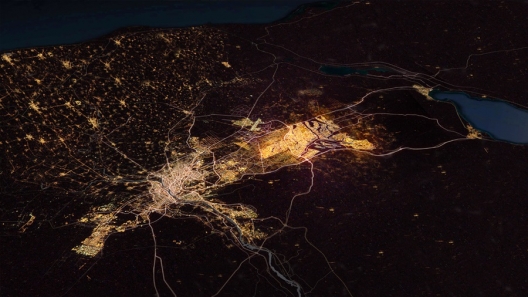 The highlight of Egypt’s three-day investment conference held in mid-March was the announcement of a new capital city. The news also proved to be the most controversial of the international gathering, where Egypt concluded deals surpassing all previously announced expectations. The 700-square kilometer new capital, the first phase of which it is estimated will cost $45 billion, will be home to administrative facilities currently located in the heart of Cairo, including the parliament, ministries, embassies, and consulates, as well as the presidential palace, and residential areas expected to accommodate more than 7 million people. The government is anticipating the completion of the new capital in a short five to seven years. While the scale model displayed at the conference venue in the Red Sea resort of Sharm al-Sheikh and the documentary played for conference attendees unveiled an impressive megaproject that seems capable of solving Cairo’s chronic problems, skepticism over its success, let alone the feasibility of such an over-ambitious plan has given rise to a heated debate.

Economic expert and former International Monetary Fund official Fakhri al-Fekki supports the establishment of a new administrative capital to reduce pressure on the densely populated Cairo. “Transferring government buildings to a new city is now a necessity,” he said, adding that Cairo will remain the official capital. Fekki, however, objects to the choice of location. “National security was not put into consideration when choosing a place that is close to the Suez Canal and the Sinai Peninsula.” Fekki is also opposed to the timeframe for completing the project. “The current economic situation in Egypt would not allow the immediate implementation of a project of such magnitude,” he explained. “True, it is important to lay the foundations for a new administrative capital, but not start working on it right away. This could be done gradually as the Egyptian economy picks up and as Egypt’s ability to attract investment increases.”

Professor of International Economics and former Dean at the National Planning Institute Mahmoud Abdel Hayy also supports the idea of an administrative capital, but argued that it is not a priority at the present time. “Investing in water, electricity, oil, and land reclamation should be the topmost priority because this is what offers real security for citizens,” he said, adding that the new city will be another replica of upscale suburban areas built outside Cairo during the Mubarak era. “Those cities only widen the gap between the rich and the poor because only the rich can afford to live there and the poor won’t be able to work there because of the cost of commuting.”

Associate Professor of Economics Ehab al-Dessouki, however, says the advantages of the new capital cannot be overlooked. “Establishing the new city will lead to developing a large part of the desert and will expand Cairo all the way to the coastal city of al-Ain al-Sokhna,” he said. “It will also reduce the pressure on Cairo’s infrastructure and will eventually result in less pollution and congestion.” The project, Dessouki added, will introduce Egyptians to the possibility of going out of the old capital and seeking opportunities in a new city that is expected to offer a large number of jobs. Dessouki, however, noted that there is no guarantee that Egyptians who will work or live in the new capital will not remain attached in one way or another to the old one, which will therefore continue to suffer from the same kinds of pressure it faces today.

Adham Selim, architect and researcher at the Frankfurt-based Städelschule, disagrees with the theory that a new city will reduce pressure on Cairo at all. “If you build a new capital that close to the old one, it is impossible for the problems of the latter not to affect the former,” he said. “In fact, the services and utilities that need to be provided for the new city are bound to constitute a burden on the networks already suffering in the old capital, so the more the new capital demands, the worse the services in the old one will become.” Selim added that even if the new capital offers job opportunities, workers will most likely commute from the old capital. “This will lead to tremendous pressure on public transportation between the two cities especially during rush hour.” According to Professor of Urban Planning Ashraf Fahim, this problem will not be solved unless the government starts new bus lines that connect the old and new capitals and extends the subway to cover the new areas. “Yet, even after doing so, traffic between the two capitals will remain a problem especially since people currently working in ministries and main government facilities live in Cairo,” he said. “Only building housing complexes at the new capital for those employees and making them available for rent at cheaper prices than Cairo would eliminate this obstacle.” Fahim, however, does see a new capital as a step forward for Egypt, provided that it is implemented in the right way. “All government bodies should coordinate to make this project work in a way that really allows Egyptians to get out of the 6 percent [of land] to which they have been confined for hundreds of years,” he said, adding that the government cannot cancel the project after it was officially announced to the world at the conference.

Urban policies researcher Yehia Shawkat argues the policy of constructing new cities to alleviate pressure on Cairo has so far proven a failure because the percentage of the population that actually moves there is meager. “Around twenty new cities have been built throughout the past decades. The total number of housing units in those cities amounts to one million, only a quarter of which are inhabited,” he said. “It is clear that the policy of redistributing the population is not working, yet the government keeps building more cities.” Shawkat added the majority of Cairo’s inhabitants are workers who are tied to the places where they run their small businesses. “They are not going to move to a new city that mainly offers administrative services and they are the biggest population block,” he said. “A study about who is to live in the new city has to be conducted.” In addition to agreeing with many experts as far as increasing the burden on Cairo’s resources is concerned, Shawkat noted that the construction sector will focus on the new city and neglect the old one, which is in dire need of maintenance and development. “This will make the new capital an enterprise which creates an economic bubble, meaning that it will lead to temporary and unreal economic prosperity.”

The initial euphoria over the construction of the new capital is gradually fading with a sizable number of experts underlining the negative impact of the project, and downplaying the economic and demographic benefits it is expected to bring. Some have also questioned the completion of the megaproject, pointing to Egypt’s recent history of similar plans that have failed to materialize. Linking this project to other equally ambitious ones, like the new Suez Canal, might play a role in increasing concerns as many wonder if the state’s image as the initiator of major development projects takes precedence over what it can actually achieve on the ground.