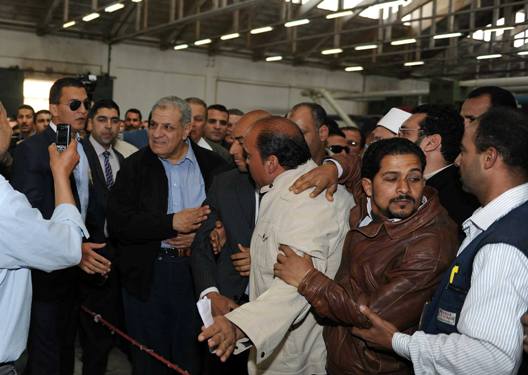 Last week Egypt’s new Prime Minister, Ibrahim Mehleb, announced he was banning bottled water in government buildings.  “This step comes from my eagerness to cut spending and share the lifestyle of ordinary people,” Mehleb was cited as telling reporters. On social media, reactions fluctuated between nods of approval and criticism of a “silly PR move” that lacked substance.  Some Egyptians appreciated the gesture. But as a former policy chief in Hosni Mubarak’s National Democratic Party, for others Mehleb’s Everyman credentials are dubious.

Now one of the new prime minister’s biggest challenges is how his government intends to assuage a wave of strikes that is spreading through Egyptian society. And that means earnestly responding to the demands of ordinary people who, as February’s strikes and protests suggest, increasingly feel the roadmap’s promises of economic renewal and stability have not been delivered.

The en masse resignation of Hazem El-Beblawy’s cabinet came against a backdrop of growing industrial unrest across the country. In February, two major strikes by workers at Mahalla’s Misr Spinning and Weaving Company textiles factory and the Public Transport Authority (PTA) in Cairo left key economic operations on hold for days and weeks at a time. Both industrial actions have since been suspended for negotiations to take place.

A conference at the Press Syndicate last weekend saw workers from nine companies, as well as Doctors’ Syndicate strike representatives, coordinating together to better realize their demands. “We have reached the conclusion that we cannot achieve our demands, cleanse our companies from corruption, return privatized companies to the public sector and put them back in business, unless we unite and move together instead of individually,” a statement read.

All dentists, doctors and pharmacists in public hospitals have announced an open-ended partial strike, starting March 8, for better pay and a higher allocation for healthcare in Egypt’s national budget. Emergency services would be unaffected, Mada Masr reported, but major industrial action in the medical sector reflects a wider escalation.

“Stop all kinds of sit-ins, protests and strikes. Let us start building the nation,” the Associated Press quoted Mehleb as saying on his first day on office on Sunday.”No voice must be louder than the voice of construction and development. Your demands will be taken very seriously,” Mehleb said, addressing striking workers, “but I also know how much you love your country and your desire to build and elevate it.”

The appeal reflects a growing emphasis on patriotic appeals to workers in the hope of halting further industrial unrest. There are also echoes of the language used by Beblawy in his 15-minute resignation message – “It is time we all sacrificed for the good of the country.” Part of the rhetoric reflects a desire for damage control. Industrial unrest is reported to have contributed to the resignation of Beblawy’s government.

Joel Stacher, political science professor at Kent State University and author of Adaptable Autocrats: Regime Power in Egypt and Syria, denied any link between the resignation and Sisi’s presidential bid, as was speculated when the news broke. “People are saying this happened now because of Sisi. It happened now because there is unrest, as well as the gas shortages and electrical cuts.”

Other analysts disagree, pointing to a broader lack of transparency in the Egyptian government. “Many have made the claim labor unrest led to the cabinet resignation – the fact is, there are probably a confluence of interests and reasons, few of which have become clear,” said H.A. Hellyer, associate fellow at the Royal United Services Institute in London and the Brookings Institution in Washington DC. “We ought to wait and see.”

“I do not think that this cabinet has anything to do with Sisi’s prospective presidential run – I do suspect it has more to do with decisions that need to be taken prior to the first post-presidential election cabinet.”

“Give the government a chance”

One such decision would be resolving industrial unrest with the help of a new manpower minister, Nahed El-Ashry, who first starting rising through the ministry in 2006 under Hosni Mubarak and served in the ministry’s negotiations and collective bargaining department under Mohamed Morsi and the subsequent transitional government.

Some workers are unconvinced. Strikers in Mahalla and Cairo did not respond positively to the news of Ashry’s appointment.

Fayed claimed Ashry had a reputation of “short-changing workers” in her capacity as negotiations chief, something also stated by workers at Tanta Flax & Oil Company, where hundreds were fired after the firm was sold off to the private sector  before operations halted. Ashry negotiated on behalf of the workers at the time. “Throughout negotiations, she was against the workers,” claims Tanta worker Gamal Osman. Workers accuse the new minister of forcing employees to resign or enter early retirement during the messy privatization at Tanta Flax. “I don’t know why the new cabinet chose her, unless they want to make it clear that they are against the workers.”

Aly Fatouh, a PTA bus driver and strike leader from Cairo, on the other hand, said that workers should “give the new government a chance” but admitted Ashry may not have been “the best choice.”

Either way, Ashry will perhaps look to shut down protests by handing out a reported EGP 9 billion, originally set aside under Beblawy’s cabinet for public sector workers’ minimum wage provisions.  There are indications from the finance ministry that the original promise to public sector workers may not be delivered. On Wednesday, Mehleb visited Mahalla to promise workers they would receive the minimum wage – however, a reported two million workers have so far been excluded from the raise.

Even so, the government will also have to navigate its way round a growing range of industrial demands – delayed bonuses, better pay and conditions, the removal of allegedly corrupt government and business leaders.

A career civil servant, Ashry is a very different pick to her predecessor – Kamal Abu Eita. Before taking his post, the leftist was regarded as a radical labor activist and leading advocate for independent trade unions in Egypt. In government, Abu Eita was still a “man of the square” (or so the ministry liked to say), despite claims he had sold out and failed to uphold workers’ rights. His departure could cost the government at a critical time.

If Egypt’s government genuinely intends to answer the demands of workers – and not just silence industrial unrest – it will need to do more than appeal to the patriotism of the Egyptian working-class. That means making concessions, entering negotiations in good faith and not resorting to old-style repression against workers.

In short, Mehleb must do more than bans on bottled water.