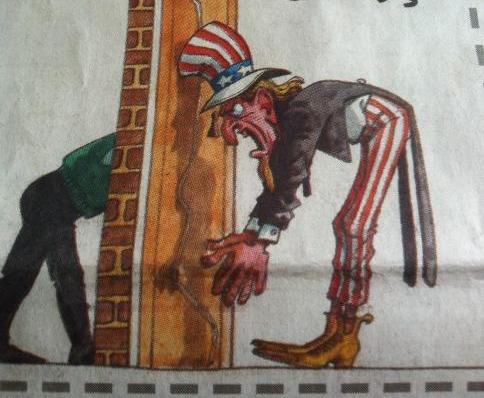 Hopes were high that the second session of the NGO trial, held on March 8, would yield a resolution to the worst crisis in US-Egypt relations since the 1967 war. Robert Becker, the only indicted American who did not choose to leave the country after the travel ban was lifted, said he stayed to stand trial along with the 14 accused Egyptians because he is convinced of his innocence and the fairness of the Egyptian judiciary. But after today’s discouraging hearing, a solution seems to be slipping even further out of reach. The presiding judge decided to postpone the case to April 10 and called on the General Prosecutor’s office to bring in all accused foreigners who fled the country last week.

The strained relationship between Egypt and the United States has been in the epicenter of local and international news for the past 2 months. All around the world, concerned observers have been riveted on the crackdown on Egyptian and foreign non-governmental organizations (NGOs) that started suddenly on December 29, 2011. Early on, there were clear signs that this politically motivated investigation was not being conducted fairly or transparently. The investigators and the Egyptian government officials held press conferences and spoke to the media about sensitive information that should have been kept undisclosed due to the ongoing investigation. Egyptian officials, in particular Minister of International Cooperation Fayza Aboul Naga, have repeatedly insisted on upholding Egypt’s right to investigate irregularities and spurred a xenophobic media campaign against the United States and the targeted NGOs. The “Egypt wont kneel” video of Prime Minister Kamal al-Ganzouri speaking at the People’s Assembly brought back memories of similar video of former President Gamal Abdel Nasser, in 1964, criticizing the U.S. and its aid policies.

Meanwhile, the United States has been in crisis-management mode. In response to the escalating investigation, the United States sent several delegations of senators and congressmen, diplomats and military officials in an attempt to negotiate with the Egyptian authorities, while threatening to withhold Egypt’s $1.3 billion military aid budget.

Shortly after the Egyptian government raided the offices of 17 NGOs in Cairo on December 29, I wrote an analysis questioning the motivations behind the investigation and criticizing the mismanagement of the process. It was apparent from the sudden escalation of the judicial inquiry that this case was politically driven from the start, and was anything but an independent or democratic process, as Egyptian officials tried to claim. And the abrupt and dramatic lifting of the travel ban last week confirms beyond a doubt that this case is a piece of political theater directed by Egypt’s leaders, who are manipulating the judiciary to advance their own strategic interests. On February 29, just three days after the first court session of the case, an Egyptian judge decided to lift the travel barring foreign NGO employees from leaving the country with a bail of 2 million Egyptian pounds (about $300,000). This mysterious decision, quickly attributed to a dodgy bilateral deal, and the departure of the foreigners the day after prompted a divide within the executive and judicial branches in Egypt, each blaming the other for betraying and selling out Egypt’s sovereignty and national dignity. The Supreme Council of the Armed Forces (SCAF) failed to issue any explanatory statement, despite rising pressure from members of parliament who are demanding an inquiry into the government’s handling of the case.

Meanwhile, Prime Minister Kamal Ganzouri’s cabinet has also come under fire from Parliament, as prominent members of the Brotherhood and other political forces accuse Ganzouri’s ministers of caving to American pressure. On March 8, Ahmed Fathi, head of the Brotherhood’s Shura Council, described the Cabinet as “weak and shaky” and warned that the People’s Assembly may call for a vote of no confidence within days. International Cooperation Minister Fayza Aboul Naga is struggling to defend the besieged cabinet – and her own job – and claimed that only the SCAF has the authority to form a new government, according to the interim constitution. As the Parliament escalates its fierce attack on the executive branch, it’s clear that the SCAF’s biggest problem right now is not the United States, but its own legitimacy crisis.

Looking beyond the tense bilateral relationship, the NGO case is much bigger than a diplomatic hiccup in the US-Egypt relationship; it reflects a lack of accountability on the part of Egypt’s leaders and the chaos that has resulted from their mismanagement of the transition and failure to put forward a vision for the future. Since the SCAF took after Mubarak’s resignation last February, Egypt has been stumbling from one hurdle to the next with no clear vision or strategy for correcting failed policies. Starting with the dubious Constitutional Declaration delegating all executive powers to the ruling generals, Egypt’s political transition has been further complicated by a chaotic electoral law and process and the deepening economic crisis.

The latest stumbling block, a xenophobic and politically motivated row with the United States over NGO funding, is another short-term distraction that prevents Egypt’s political forces from working collaboratively to develop a long-term vision for the country’s future. This self-destructive behavior was aptly described by Thomas Friedman as “Egypt’s Step Backward.” Some would argue that this view is overly pessimistic, but I believe it is a sorely needed reality check. You can’t fight an enemy you don’t know, and therefore it is imperative that Egyptians recognize that the greatest obstacles to a democratic transition are domestic not foreign.