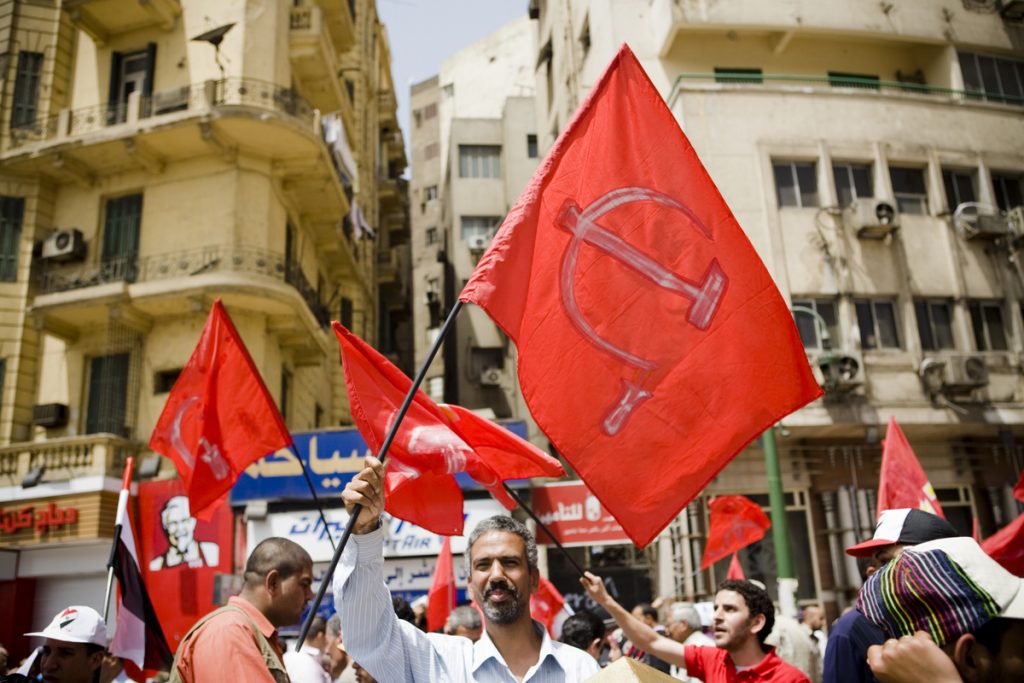 Egyptian leftists and socialists have a branding problem. Instead of working to develop a constructive vision for the future, they are wasting time defining themselves in terms of what they are not, and in reference to their neoliberal political opponents. Leftists are building their political capital on criticism of neoliberal criticism, rather than thinking critically about the policies and legal reforms that could actually protect workers’ rights and guarantee independence for labor unions. Their campaign tactics seem to have emerged from a time warp and are more suitable for the political discourse of the 1950s and 1960s than 2012.

The Left has been an integral part of the Egyptian revolution from the early days of the uprising and remains a vital force demanding social change and economic justice. Yet, their strategy of scapegoating neoliberalism, which does little to address the root causes of inequality and corruption, has alienated a large number of their potential supporters. Leftists have always claimed to be liberals while in fact they are far from it. The Egyptian leftist movement’s political agenda features three major flaws:

1. Insisting on preserving a state-managed economy:

Classic leftist are marked by their detachment from reality. From their rise in the 1940’s, these traditional socialists have failed to adapt to social and economic changes that had fundamentally transformed Egypt by the 1970s. Egypt’s economy prior to the Free Officers Coup in 1952 was among the most promising in the world. But Nasser’s policy of nationalization dealt a damaging blow to the Egyptian economy, handicapping the sectors of trade, agriculture and manufacturing and crippling the private sector. Classic leftists’ insistence on maintaining government intervention in the economy will not allow for the private sector-led innovation that is required to integrate Egypt with the global economy and fuel sustainable development.
but they neglect the fact that trade, agriculture and industry suffered badly and the private sector which most modern world countries rely on was obliterated by the Nationalization laws. The result was the poverty that spread even further in the society. There may have been some marginal achievements in the field of heavy industries like Steel and Aluminum but the overall experience was abysmal and not near as perfect as the socialist claim to be.

2. Stigmatizing Egyptian businessmen as crooks and foreign investors as imperialists

The anti-private sector backlash seen since Mubarak’s ouster is not new to Egypt. Since the early 1950’s, leftists led by the Tagammu’ Party have sought to brand Egyptian businessmen as corrupt criminals.  Over the years, the campaign against neoliberalism has created an unhealthy environment for private sector development. Similarly, nationalist propaganda portraying foreign investors as “imperialists” have deterred much-needed international capital flows that could fuel Egypt’s growth.

3. A troubling alliegiance to Nasserism:

The Pan-Arab nationalist current within the Egyptian leftist movement still reveres former President Gamal Abdel Nasser as a national hero, while ignoring the fact that his repressive policies laid the groundwork for an authoritarian political system that Egyptians rebelled against in 2011. Not to mention the statist development policies and ill-conceived wars that cost Egypt territorially and economically. Leftists remain alarmingly nostalgic for the Nasser era, as evidenced by the persistence of the Nasserist Democratic Party. The name of the party itself is an oxymoron, as Nasserism and democracy are fundamentally incompatible.

No one can deny that Egyptian leftists and socialists are patriots who love Egypt but they happen to have their priorities in the wrong order. Their tendency to resort to emotional appeals and scapegoating their rivals will not help them build a political base, nor will it help them develop concrete policy recommendations. They must realize that Egypt has entered a new era in which antiquated nationalist rhetoric serves no purpose.  The leftists’ support for a civil or secular state is one of their major strengths and could provide a basis for alignment and cooperation with liberals, in opposition to the Islamists who are dominating parliament and the constitutional process and are seeking to control the presidency as well. The Left could be revitalized and gain new credibility by partnering with liberal and social democratic parties that have adapted classic socialist ideology to address the challenges of modernity and the post-Mubarak Egypt.
Hany Ghoraba is an Egyptian businessman, libertarian and freelance journalist.
Photo Credit: Arabawy