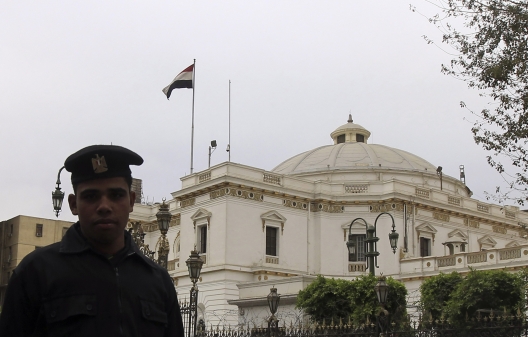 Former Egyptian Interim President Adly Mansour had already delivered an emotional farewell speech on June 4, ending nearly one year in office in which he played a largely ceremonial role as he prepared to hand power to the newly elected, former defense minister, President Abdel-Fattah al-Sisi on June 8. However, the next day, Mansour issued several laws, most significant of which was a new parliamentary elections law that was widely criticized by political parties. They see it as a major setback for any hope to build a genuine democratic, pluralistic system. The former president clearly aimed to hand his successor a clean slate, choosing to issue the controversial law himself.

After Sisi sided with popular demonstrations a year ago demanding the removal of former President, and Muslim Brotherhood leader, Mohamed Morsi,  the former army chief announced a roadmap: rewriting the constitution, followed by restoring an elected parliament, and finally electing a new president. However, difficulty in reaching an agreement on an election law that satisfied all parties who supported Morsi’s removal was among the main reasons that led to the amendment of the roadmap, with presidential elections taking place before a parliamentary vote.

This tension was reflected in the 50-member committee tasked with rewriting the 2012 Constitution, drafted by the Brotherhood and its Islamist supporters during Morsi’s short, one-year in office. Failing to agree on an election system—mainly on whether to allocate the majority of the seats in parliament to a party-list system or to an individual candidates system, they left the task to the interim government.

Mansour instead tasked a committee, headed by the minister of transitional justice, to draft the new law. Citing mainly the ongoing “war against terror,” daily anti-government demonstrations by Brotherhood supporters, and claims that the Egyptian voter is more familiar with the individual candidate system, the new election law devotes nearly 80 percent of the 567-parliament seat to independent candidates. Security bodies tend to believe that the individual system allows them greater control on who stands a chance to enter parliament, amid a wide crackdown against the Brotherhood leaders, including the seizing of their financial assets which allowed them to perform well in previous elections. The 2012 parliament, on the other hand, was elected at a time when, just ten months after Mubarak’s removal, political parties had a stronger influence and were able to ensure the elections law devoted two thirds of the seats to the party-list system.

In the 2014 law however, only 120 seats will be filled according to the list system, which additionally can be formed by either political parties or individual candidates, on the condition that they include a specific number of women, Coptic Christians, youth, workers, farmers, representatives of Egyptians living abroad and people with disabilities.

In the party-list system, candidates are named by political parties, whereas individual candidates depend mostly on their wealth, family ties or, as was the case in Egypt for the past 62 years, allegiance to a single, ruling party headed by the president. Several political parties that were established after Hosni Mubarak’s removal, as well as older parties such as al-Wafd, issued statements criticizing the law, and asked Sisi to use his power to issue legislation and amend the law.

Several parties—including Al-Dostour, the Egyptian Socialist Democratic Party, Al-Tayar Al-Shaaby (led by the only presidential candidate to run against Sisi, Hamdeen Sabbahi), the Socialist Popular Alliance, Al-Karama Party and others—have said the complicated election system will only lead to the creation of a parliament similar to those that existed under Mubarak. Consecutive parliaments under Mubarak gave the president automatic approval for legislation, failed to perform their duties to monitor government activities and its spending, as well as failing to issue legislation that guaranteed social and political rights.

With modest sources of income and attacks against them by supporters of Mubarak’s regime, who saw in Morsi’s removal a chance to make a comeback, the new post-25 January Revolution parties have said the individual system will only allow wealthy religious political parties, rich businessmen with ties to the Mubarak regime, and traditional candidates with strong family and tribal ties to win seats in parliament. They have demanded that at least 50 percent of the seats should be filled through the party-list system, allowing voters to choose their candidates on the basis of their parties’ political program, and not individual ties or wealth.

It is, however, unlikely that Sisi will respond to these demands. During one of many television interviews he gave during his electoral campaign, he expressed his personal preference for the individual system, adding that it could take between 20 and 25 years to reach a Western-style democracy in which political parties peacefully exchange power. In many other statements, Sisi implied political and human rights are not his top priority, compared to fighting terrorism, improving the economy and providing jobs. During a recent meeting with a group of British members of parliament, he said the West could help improve conditions in Egypt by relieving its debts or building new universities.

After the late President Gamal Abdel-Nasser toppled the monarchy in 1952 in an army-led revolution, he titled towards the socialist system, banning all political parties, and charged they were part of the old feudal system that conspired with the king and the British occupation that ended in 1956. He later established the Socialist Union as the sole political organization in which Egyptians can practice politics and take part in expressing popular will, through fake and rigged elections. His successor, Anwar Sadat, sought to match his shift in alliances to the United States, instead of the former Soviet Union, by allowing a limited opening of the system, authorizing three political parties only, next to his own—the now dissolved National Democratic Party (NDP). One month before his assassination by radical Islamists in 1981, agitated by growing opposition to his rule, he suspended all political parties and arrested 3000 opponents.

Mubarak, who remained in office for 30 years, planning to hand over power to his younger son, Gamal, maintained the single-party rule he inherited from Nasser and Sadat, while tolerating a few opposition parties. Their role was limited to expressing their views within a limited environment, and they were not given the opportunity to compete in fair and free elections. They took part part instead in a vote that was always controlled and rigged by the government and security forces. A so-called ‘Parties Committee,’ made up of government officials and headed by the secretary-general of the former NDP, approved the creation of new parties. Thus, only a few parties were approved over the 30 years, with hundreds of requests and appeals turned down. Meanwhile, the Brotherhood, while officially outlawed by Mubarak, was allowed to run its own candidates as independents, winning more seats in 2005 than the secular opposition parties.

After Mubarak’s ouster, removing restrictions on the creation of political parties was considered one of the key achievements of the 25 January Revolution. More than 80 parties were formed, as the case has been in many countries that revolted against totalitarian rule. Only a dozen parties, however, were relatively popular or enjoyed support, with Islamist parties, including the Freedom and Justice Party, the political wing of the Brotherhood group, together with the ultra-conservative Salafi Nour Party, in the lead. The two parties, with long experience in mobilizing voters and offering direct social services to the poor, won in early 2012 over 70 percent of the seats in the only parliament elections held after Mubarak’s removal. All other secular parties won slightly over 20 percent of the seats, under an elections law that favored political parties.

While the new constitution Egyptians approved six months ago gives wide powers to the parliament, including the appointment of the prime minister, most observers believe that Sisi prefers a friendly parliament that would rubber stamp his decisions, and not one that could cause him trouble. That’s why he’s unlikely to respond to the opposition’s demand, leaving them with the tough job of seeking to build alliances that could help them win a few parliament seats.

“This election law is clearly a setback to any hope to building a true democracy here in Egypt,” said Abdel-Ghaffar Shokr, president of the Popular Socialist Alliance Party, and Deputy President of the National Human Rights Council, whose members were appointed by Mansour. He adds, “We will see a parliament that would seek to restore Mubarak’s network of corruption and business interests, and win favors from the president, and not a parliament that would issue legislations that promote human and social rights, or monitor the government and its spending.”