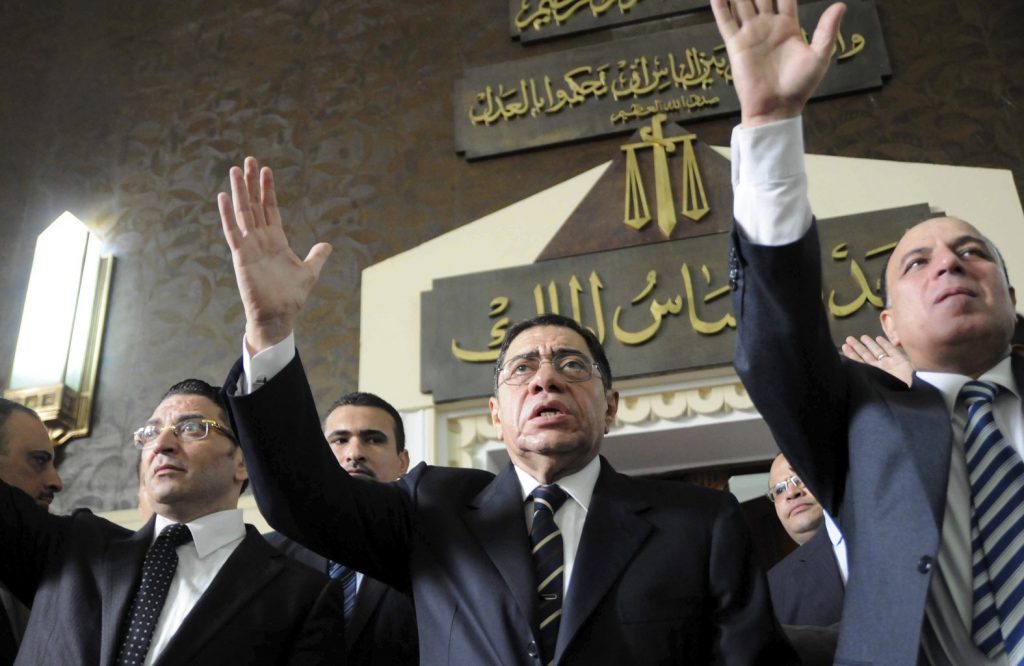 Long in the making, the embers of a dormant showdown between President Mohamed Morsi and the Egyptian judiciary have started glowing hotter in the past few weeks. Observers smelled traces of smoke when Prosecutor General Abdel Meguid Mahmoud failed to convict 24 prime suspects in the Battle of the Camel, the February 2011 attack on anti-government protesters in Cairo. More recently, members of the Supreme Constitutional Court (SCC), the court responsible for the Supreme Council of the Armed Force’s (SCAF) legal cover to dissolve the Islamist-dominated parliament, held a press conference rejecting all articles of the draft constitution concerning the powers of the court. Lastly, the administrative court set to rule on the validity of the second constituent assembly, elected by the disbanded parliament, postponed the case yet again before issuing a verdict, which is planned for next week. These events could be taken at face value — insufficient evidence, an ambiguous constitutional framework, and more time needed to deliberate, respectively — but the political implications behind each step suggest an institution issuing subtle warnings to restore its clout on the Egyptian stage or suffer the chaotic mess of a renewed constitutional process.

The Battle of the Camel marked a moment during the January revolution when all pretenses were dropped as the Mubarak government pursued any means to quash the popular uprising. Twenty-four defendants, including high profile figures from Hosni Mubarak’s National Democratic Party such as former Shura Council Speaker Safwat al-Sherif, former People’s Assembly Speaker Fathi Sorour, and ceramics tycoon Mohamed Abul Enein, faced charges for sending armed men on camel and horseback to raid Tahrir Square, killing nearly a dozen protesters in an effort to clear it. The judges found all of the accused not guilty, claiming that the only credible witness in the case had testified to seeing no casualties in the incident, despite overwhelming anecdotal evidence to the contrary. In a case as sensitive as this, no part of it could escape politicization — particularly in the context of countless acquittals and a near total lack of accountability in other cases investigating the killing of unarmed protesters. Whether their acquittal stemmed from a statist impulse to protect (former) members of the government bureaucracy or to test the resolve of Morsi’s government, the verdict had political consequences of which the judges were no doubt aware. If the intent was even partially aimed at drawing Morsi into conflict with the judiciary, the judges clearly succeeded.

The acquittals coincided with Morsi’s decree to pardon all political prisoners detained "for all felony convictions and misdemeanor convictions or attempted-crimes committed to support the revolution and the fulfillment of its goals." The decree was supposed to mark a moment of victory for the Egyptian revolution (and President Morsi), fulfilling one of the outstanding demands of protesters. However, the move was overtaken by anger over the news of the acquittals baiting Morsi to forcibly reassign Mahmoud to the post of ambassador to the Vatican. Morsi’s reactionary response, however, lacked either the legal or popular authority necessary to do so. (H. A. Hellyer remarks on the lack of revolutionary legitimacy that might have otherwise allowed Morsi to act extraordinarily to remove Mahmoud, among other measures.)

Realizing his mistake too late, the president had two options: either use his legislative authority to grant himself the ability to remove the prosecutor, which would almost certainly spark protest over the misuse of power and interference with judicial independence; or backpedal on his "demand" and "politely ask" the prosecutor to resign, which would only result in temporary embarrassment as well accusations of interference with judicial independence. He chose the lesser of two evils, unwilling to risk further damaging his legitimacy. Nonetheless, personalities such as Judge’s ClubAhmed al-Zind (among hundreds of others) defended Mahmoud’s refusal to leave the prosecutor’s office. Morsi’s inability to force his will revealed limitations on his authority: namely legitimacy on one hand, and a resistant judicial bureaucracy on the other.

The judiciary’s counter-moves to Morsi appear calculated given its vulnerability a few months ago. During the formation of the first constituent assembly in April, and the debate between Morsi and the SCAF surrounding the reinstatement of the first parliament in June, the courts and their judges revealed themselves as political actors in Egypt’s transition. Even if based on legal reasoning, the verdicts put forth served statist — and secular — interests in the ambiguity of the transitional period. After Morsi issued his decree ending the SCAF’s political role in August, renewed battle in the courts was expected, but this contest of wills never took place. Whether by virtue of an implicit or explicit understanding with the executive that allowed each branch to govern without interference from the other, the judiciary had lost too much political capital without the SCAF’s support to challenge the new president.

Since then, the Morsi administration was mostly left to its own business to pursue the president’s political appointments, his 100-day plan, and his economic recovery strategy. His justice minister’s initial forays into reconciliation, such as allowing judges to assign their own people to the Judicial Review Board, were rebuffed and suggestions at judicial reform (such as eliminating the SCC) were outright rejected. As fears of a majoritarian takeover of government bureaucracies increased and initial leaks of constitutional articles limiting judicial powers filtered through the media, the judiciary must have felt a growing threat to the self-perceived integrity of its institution. This was not the deal they had struck with Morsi, but the judges still have another card to play.

The forty-some cases challenging the validity of the second constituent assembly on the basis of its unbalanced membership have faced one postponement after another, the most recent administrative court hearing delaying a final verdict on the assembly’s validity until October 23. The judges could have delayed the case for a month or more as they often have done in the past, but putting it off for only one more week offers Morsi an ultimatum: Either ensure the judiciary’s status does not diminish in the new constitution, or suffer the consequences of a dissolved assembly before a final draft is completed. Similar to liberal and secular efforts to disrupt the assembly’s progress, this strategy may seem self-defeating given Morsi’s self-appointed constitutional power to simply reassign the assembly as he sees fit until one considers the aftermath of that scenario.

As suggested by Morsi’s preferred path in dealing with Prosecutor General Mahmoud, he values the tenuous popular legitimacy he retains. A court-ordered dissolution would not only throw the process into renewed chaos with debates over membership, content, and timeline that would undoubtedly resurface, it would also threaten his legitimacy as a president for "all Egyptians." First, the responsibility for its new membership would lie squarely on his shoulders alone in the absence of parliament. Second, if he reassigned an Islamist majority assembly, he would likely lose whatever non-Islamist support he might have and face additional accusations of majoritarian rule with an Islamist bias. But without an Islamist majority, the Muslim Brotherhood’s vision for the constitution — the prize for which it has struggled since the fall of Mubarak — becomes blurred. The political (not to mention logistical) nightmare the courts could force on Morsi might leave any president awake at night. The leverage might be substantial enough to secure the judiciary’s demands guaranteeing independence, but the turf war is far from over,