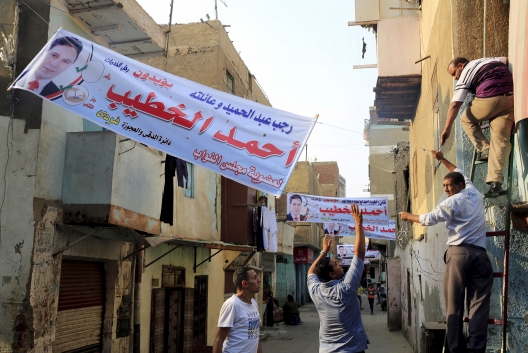 After more than two years without a parliament, Egypt is witnessing its first parliamentary elections in three years, with the race kicking off in October. Once elected, this parliament will be Egypt’s largest in several decades with 596 parliamentarians; 448 will be elected under the individual system, and 120 elected from the party-based system. Twenty-eight will be appointed by President Abdel Fattah al-Sisi.

The second stage will take place in Cairo North Sinai, South Sinai, Qalyubiya, Daqahliya, Menoufiya, Suez, Ismailia, Port Said, and Damietta on November 22 to 23. Voting for Egyptians abroad takes place on November 21 to 22. The number of candidates competing in the second stage has yet to be announced.

The HEC also announced Thursday that the first stage will be overseen by 16,000 judges and monitored by seventy-nine local and six foreign organizations. Voting will take place in 5,460 polling stations.

Unlike prior elections, the race does not appear to be dominated by a specific political party or electoral bloc. Many former National Democratic Party (NDP) parliamentarians are running in the upcoming elections as independent candidates, while the dominant party in the previous elections, the Muslim Brotherhood’s Freedom and Justice Party, has been banned, and many of its leading members are in prison. As a result, observers expect that the coming parliament may be dominated by independent candidates who have no political affiliations.

The HEC announced Saturday that seven electoral lists are running in the upcoming elections: the Nour Party, Forsan Misr (The Knights of Egypt), the Egyptian Front, the Independent Current, Fi Hob Misr (For the Love of Egypt), Nedaa Misr (The Call of Egypt), and al-Sahwa al-Wataneya (The National Awakening). The first four lists are contesting fifteen seats in the West Delta, while the last three lists are contesting forty-five seats in north, middle, and Upper Egypt. Electoral coalition Sahwat Misr (Egypt’s Awakening) chose to withdraw from the elections in protest of parliamentary candidates having to retake medical tests that cost almost 3,000 Egyptian pounds per person.

Some political parties also have candidates running on the list such as the Conference Party, founded by Amr Moussa, Egypt’s long term foreign minister under Mubarak, and the Wafd Party, Egypt’s oldest liberal party. The list representatives say it is composed of high-profile national figures that are running in the upcoming elections for the sake of Egypt’s national interests, and to support Sisi.

Find out more about the various electoral coalitions here.

The Free Egyptians Party recently announced that it is fielding 227 candidates under the individual system, and four candidates on the Fi Hob Misr List. News outlets have reported that many of the party’s candidates were previously affiliated with the NDP. Shehab Wagiuh, the party’s spokesperson, confirmed the reports, clarifying however that none of those candidates were involved in any corruption cases, and they are all well-known to voters. Wagiuh also told reporters that the party’s platform is inspired by a Brazilian program, Bolsa Familia, which provides welfare to impoverished families through conditional cash transfers.

The Egyptian Social Democratic Party (ESDP) is also contesting independent seats, after they were expected to run with the outgoing electoral list of Sahwat Misr. The party also launched its parliamentary program which, according to ESDP board leader Ehab al-Kharat, focuses on issues such as teachers’ wages, health expenditures, and professional training.

The liberal Dostour Party founded in 2012 by Mohamed ElBaradei is witnessing internal rifts, with two competing factions issuing contradictory statements on their participation.

Several high-profile revolutionary figures, including Amr Hazawy and political activist Ziad al-Alami, who served as members in the 2012 Islamist- dominated parliament are not running in the 2015 race. Amr al-Shobaki, however, a political researcher and a former parliamentarian, is contesting the same seat he won in the 2012 race.

For Islamists, the most significant faction running in the elections is the Salafi Nour Party, the only Islamist Party that supported the July 2013 ouster of former president Mohamed Morsi. The Nour Party announced that it is contesting nearly 60 percent of the seats. The party came second in the 2012 elections with 22 percent, behind the Muslim Brotherhood’s Freedom and Justice Party. Members of the Nour Party itself, however, have admitted that their popularity has suffered in the wake of Morsi’s ouster.

Abdel Moneim Aboul Fotouh’s Strong Egypt, the Centrist-Islamist Wasat Party, and the Islamist Building and Development Party, have all decided to boycott the elections.

Meanwhile, some political parties have accused the HEC of not dealing with electoral violations by their rivals. Wafd Party Deputy Chairman Hussein Mansour issued a statement saying that the HEC “had lost its credibility” after it failed to deal with candidates who began campaigning six days prior to the official campaigning period began. The Egyptian Front also condemned the HEC’s policies in a statement, accusing them of bias.