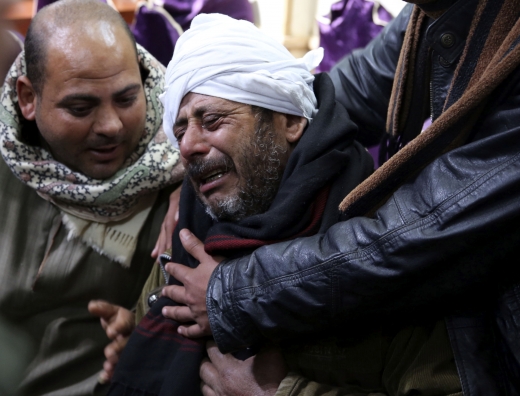 “How could I go to the Coptic Cathedral to extend my condolences when the Egyptian army hasn’t avenged the attacks?” asked Egyptian President Abdel Fattah al-Sisi in a pre-recorded speech broadcast Sunday night.

Vengeance was a top priority for the Egyptian president after a video uploaded by the Islamic State of Iraq and al-Sham (ISIS) showed the beheading of twenty Egyptians and a Ghanaian on a beach, said to be the shore of the Mediterranean Sea in Libya. Sisi confirmed the Egyptian air force carried out thirteen strikes on Islamic State targets in Libya.

Egypt’s role in the coalition to combat the violent extremist group has not been widely publicized, but it has been at fighting ISIS on two fronts for many months now: militarily and ideologically.

A strategic ally to the United States in the region as well as the strongest Arab air-force, Egypt was among the key coalition partners Secretary of State John Kerry wanted to secure in the summer of 2014. However, Foreign Minister Sameh Shoukry told Kerry at the time, Egypt had to “fight its own battle,” which was understandable given the increasing intensity not only of the Islamist insurgency in North Sinai, but a surge in attacks in other governorates.

In the ideological battle against ISIS, however, Egypt has been a willing partner from day one. Kerry and Shoukry emphasized the important role of Egypt’s religious institutions, al-Azhar and Dar al-Iftaa, in “confront[ing] extremism and radical ideas.” Egyptian scholars are to be dispatched around the world in 2015 to further the efforts against the well-oiled propaganda machine.

Al-Azhar’s Grand Imam Ahmed al-Tayeb took a lead on these efforts at the counter terrorism conference held Sunday in Saudi Arabia. He rejected the group’s interpretation of the Koran and pointed to “education” as a solution “to correct erroneous and ambiguous concepts.”

Al-Tayeb’s message does not stray too far from that of Western leaders stressing the need to tackle the root causes of radicalization. However, a message the West may not like to hear is the Imam’s conclusion to his speech, that the Arab and Islamic worlds are “facing major international schemes… To disintegrate the countries in accordance with the dreams of new world colonization allied with the Zionist world.”

Previous efforts worldwide to combat radicalization haven’t been hugely successful. It is thought that the number of foreign fighters in Syria and Iraq exceeded 20,000. The report by the International Center for the Study of Radicalization states that Egypt itself has been the source of an estimated 360 fighters.

A Province in Sinai

Shortly after Shoukry and Kerry’s meeting in October, Egypt witnessed one of its most deadly terror attack in years, which also proved to be ISIS’ inaugural operation in Egypt.

Militant group Ansar Bayt al-Maqdis (ABM), which has been the source of much of Egypt’s security woes over the last two years, has focused its resources on targeting security forces in North Sinai, turning the region into a war zone. Following the ouster of Mohamed Morsi in 2013 the group intensified its activities in response to what it described as the “slaughter of Muslims” in the crackdown on the Islamist president’s supporters, . The group placed the blame on then Defense Minister Sisi and Interior Minister Mohamed Ibrahim.

In November ABM pledged allegiance to the self proclaimed Caliph, Abu Bakr al-Baghdadi, and a few days later claimed the deadly attack through a video bearing all the hallmarks of an ISIS production as well as a new brand: Province of Sinai.

The Sinai branch of ISIS has been giving the armed forces a tough fight, kidnapping and executing security officers, and those suspected of cooperating with them or with “Zionists.” It also carried out another large scale attack in the city of al-Arish at the end of January, which claimed more lives than the previous operation.

Troubling Developments to the West

While ISIS made its presence known in the Sinai, around the same time on Egypt’s western border, amidst militia groups grappling for territory and power across Libya, the allure of joining the ISIS brand was growing. Al-Baghdadi accepted a pledge of allegiance from the Islamic Youth Shura Council in November, who unlike their Egyptian counterparts were able to form a stronghold in Derna, just a few hundred kilometers from Egypt, and even closer to the Tobruk seat of Libya’s internationally recognized government. The group had shown its ISIS-like brutality on a number of occasions, including the August 2014 public execution of an Egyptian at a football stadium in Derna.

Egypt was already concerned as Islamist groups gained strength in Libya, and it was reported that Egypt provided logistics and helped to facilitate United Arab Emirates airstrikes on Islamist targets.

In January reports emerged that militants went door to door checking men for the small tattoo of a crucifix, which many Egyptian Christians bear. In addition to the twenty who were killed, more Christians are reported to have been abducted in Libya.

The targeting of Egyptian Christians is not a new phenomenon in Libya. Church attacks, detainment, abuse, and murder date back to 2012. Thousands may have recently returned but it is thought that there are up to 1 million Egyptians in Libya, many looking for work due to economic conditions at home.

Sisi has shown the world now more than a hint of his priority to push back Islamists from his western border. Following the airstrikes, Egypt went to the UN calling for international military intervention, but the message was quickly toned down to pushing for support for the Libyan request to lift an arms embargo, and calling for a naval blockade of terrorist-controlled territory. Shoukry also said aiding Libya in its fight against terrorism should be allowed, provided it is approved by the “legitimate Libyan government.”

It would be no surprise if Egypt strengthens its support for Tobruk. Reports have circulated alleging Egyptian Special Forces entered Libya in a snatch and grab operation as well as plans for Egypt to facilitate Russian arms to the Tobruk government.

Sisi also reiterated on Sunday his willingness to defend Egypt’s borders, and beyond. “If the need arises the Egyptian Armed Forces will also defend the region and their Arab brothers,” he said.

The lead executioner of the Egyptians in Libya warned that he and his comrades hope to “conquer Rome, by Allah’s permission.” A threat to the West only strengthened by the fact he was standing on the Mediterranean shore and pointing towards Europe.

Depending on the validity of this threat and the developments in Libya, the West may opt to contain the threat in North Africa, and in so doing, turn to Egypt. Sisi’s forces could then find themselves battling ISIS in the east and the west

While a political solution to the conflict in Libya is the preferred option for the international community, Shoukry warned on Tuesday that this might not be enough. He described the approach by “several countries” who hope a political solution “will deal with the effects of terrorism,” as “astonishing”

He accused the anti-ISIS coalition of   being inconsistent in its approach, adding, “Do the Libyan people not deserve the same support as the measures undertaken by the coalition in (Iraq and Syria)?”

Egypt’s war on ISIS will continue within its borders and in its religious institutions, but since the airstrikes in Libya, Sisi has made it clear Egypt is ready and willing to use military force, as ISIS looks to gain a stronger foothold in North Africa.

Image: Photo: The father of one of the Egyptian Coptic men killed by ISIS in Libya mourns at a church before attending mass in El-Our village, in Minya governorate, south of Cairo, February 16, 2015. (Reuters/Asmaa Waguih)