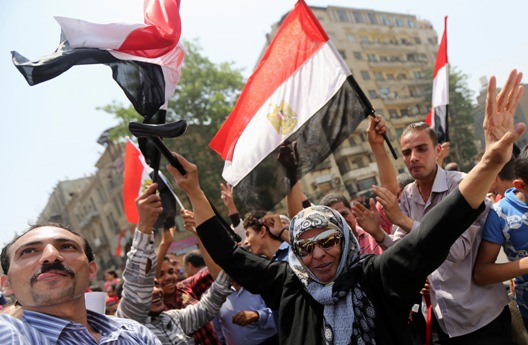 One day before the beginning of presidential elections, the Egyptian Center for Media Studies and Public Opinion (ECMSPO) published the results of a counterintuitive poll. Based on personal interviews with 10,524 citizens throughout Egypt’s governorates, they predicted a turnout of only 10 percent.

More shocking, and controversial, was their estimate that 48 percent of presumed winner Abdel Fattah al-Sisi’s votes would come from Christians.

On the first day of voting the webpage of the Freedom and Justice Party (FJP), the political arm of the Muslim Brotherhood, seized on this survey. Publishing pictures of old men, smiling ladies, and assortments of priests and nuns, they featured the sectarian-laden headline: “Elderly, Women, Christians … the Trinity of Election Theater Today.”

But as reports streamed in of otherwise empty polling stations, this headline gained credibility. As the Presidential Elections Commission (PEC) decided to make the second day a public holiday, and then extend voting to a third, it cemented the impression even more.

Hamdeen Sabbahi, Sisi’s only competitor, failed to mount a substantial challenge. This turned the election into a referendum on Sisi, in which turnout becomes the best measurement of success. The third day extension practically screams of desperation.

Has there been ten percent, as predicted by ECMSPO? On Wednesday they published their finding that turnout equaled only 7.5 percent. The detail is added that their team includes fifty-three researchers and 297 volunteers.

On the opposite end of estimates, al-Masry al-Youm, an independent Egyptian newspaper, claimed the French AFP media outlet obtained figures from the PEC claiming 37 percent turnout in the first two days. After the third day, unofficial results indicate a turnout of 25.6 million, or 47 percent. The figures come from Judge Tarek Shebl, a member of the general secretariat of the PEC.

The PEC is not scheduled to release official results of the election until June 5, though an official says it will do so as early as July 3-4. As concerns the percentage of Christian support, the PEC does not break down totals beyond geographical location.

Clearly, there is a great contest underway. The Muslim Brotherhood invested itself heavily in a boycott, joined afterwards by certain liberal revolutionary groups. Their strategy failed concerning the constitutional referendum, when turnout exceeded that of the 2012 referendum and reached 98 percent approval.

But despite various low turnout explanations such as voter fatigue, apathy, and a perception of Sisi’s inevitable victory, the boycott argument threatens to give strong momentum to the claim that Egypt rejects the coup, or at least Sisi as president. Many polling stations appeared empty, and the national media was in a frenzy. Sabbahi pulled his monitoring team midway through in protest of violations, so he can neither verify nor dispute the count. When he failed to withdraw from the race altogether, his youth wing protested vehemently.

The turnout figures are possible, but do not seem to pass the eye test. Significantly, the European Union monitoring team appears to endorse official turnout numbers, but judgment must be reserved until the official release of figures.

Meanwhile, a closer look at ECMSPO and the Coptic electorate is necessary to contemplate the lower end of predictive analysis, as the pro-Morsi alliance calls for yet another revolutionary wave.

In July 2013, ECMSPO published an equally contrarian survey, finding that 63 percent of Egyptians were opposed to Mohamed Morsi’s ouster. This prompted H.A. Hellyer of the Brookings Institute and a former senior practice consultant to Gallup to write that he had never heard of the organization before, nor had his colleagues with ten years of experience in the field.

That poll claimed 3,814 interviews conducted over a period of two days. Hellyer considered the monumental effort necessary to conduct this tally, expressing ‘such capacity would have made it the envy and pride of the polling industry’. By contrast, the recent Pew Research poll which found only 54 percent support for the ousting of Morsi was based on 1,000 face-to-face interviews over a nineteen day period in April.

ECMSPO claimed their recent survey was done through field research. Assuming the same team of 350 members, this survey required each one to have five interviews per day for six days straight while traversing the country, based on random criteria, to find a cross-section of the Egyptian public. Perhaps this is feasible, but Hellyer’s objection is notable. Besides, would nearly a third of those backing Sisi in their survey self-identify as supporting the return of the Mubarak regime?

No one doubts the firm Christian support for Sisi, but Copts were also heavily invested in the 2012 second round elections between Morsi and Ahmed Shafik. There are no figures for Christian participation, but countrywide turnout equaled 51 percent. That election was highly contested; if turnout was really so low, is it reasonable to expect such church mobilization – in ratio nearly five-to-one greater than their Muslim counterparts – in this election that was already substantially decided?

Of course, there is evidence to support an unofficial effort to get out the Coptic vote. Posters show pictures of Coptic Pope Tawadros together with the general, with the slogan, “The Lord Jesus calls you to support Field Marshal Sisi.” SMS messages have been sent with similar urging.

Those behind these efforts are currently unknown, but the church has denied any relation to the campaign and asserted its neutrality between the two candidates. The same denial, however, calls on all Egyptians to participate. This effort can be viewed positively as a national duty, or cynically as support for Sisi’s presidential referendum.

But cynical also is Muslim Brotherhood use of this demographic reality. To call the elderly, women, and Christians part of a ‘Trinity’ is to use theological language instinctively repulsive to Muslim sensibilities. That they call elections a ‘theater’ is reasonable given their organizational viewpoint; that they play games with religious minorities, gender, and age – as if these did not have the rights of citizenship to choose freely – is not.

Of course, the Muslim Brotherhood is not the only group making sectarian usage of the Copts. Lamis al-Hadidi, a pro-government media personality on the private CBC channel, urged them to vote reminding of their sixty churches burnt by terrorists. She, like the FJP, has crossed a line.

Perhaps individuals within the church are privately backing Sisi behind the scenes, and directing Copts to vote for him through internal discourse. If so, they too are crossing a line. But the church has had good sense to avoid this distinction publicly, officially instructing priests not to directly support a candidate.

Whether turnout is high or low, it may well prove that together, this Trinity elected Sisi. The Brotherhood may be right to fume, but they are wrong to do so with such sectarian language. Unfortunately, it is only one more example of the morass into which Egyptian politics has descended, and the mud slung by many.

But mud is slung in advanced democracies as well, and generally speaking it does not hinder straightforward readings of electoral results. The election of Sisi was supposed to be simple, though Egypt’s democracy is far from mature. Contested turnout figures are just one more bump in a very long road.