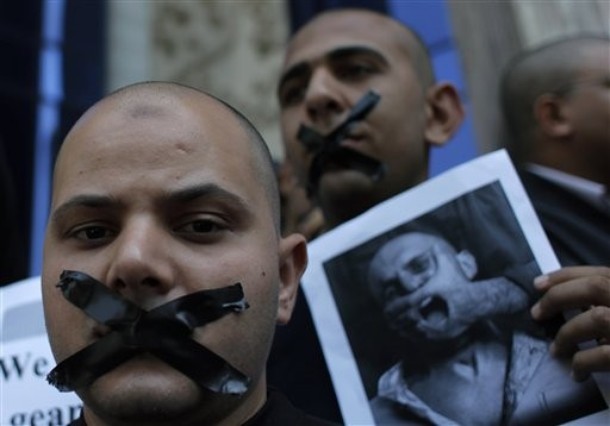 The Egyptian Organization for Human Rights released a 63 page report (Arabic) "Intellectual Terrorism and the Policy of Censorship", focusing on the state of press freedom in Egypt, beginning with the January 2011 uprising up until the present day. EOHR has outlined the repressive tactics that have been used against journalists in the country, whether under the Mubarak regime, under SCAF, and most recently under President Mohamed Morsi, ending the report with a a list of recommendations on how to remedy the problem.

The EOHR report lists 212 violations against members of the press including the ill-treatment of journalists, cases of assault, legal action, both through the filing of complaints with the Attorney General and summoning journalists before the country’s military courts, the seizing of equipment and newspapers, and more.

The report also refers to the Reporters without Borders Press Freedom Index for 2011/2012, in which Egypt dropped 39 spots to 166th out of 179 countries, as a result of repressive tactics used by the Supreme Council of the Armed forces.

While the Minister of Information has promised changes to Egypt’s state media, guaranteeing journalists’ rights, the EOHR gave 10 recommendations on what needs to be done to address the issue, which they phrased as follows:

2 – A request that the appropriate authorities adopt all legal measures available to ensure the personal safety of media professionals from detention, attack, or murder, their protection from arbitrary exposure, surveillances, or repression, and especially as concerns those professionals whose opinions oppose the current religious mainstream.

3 – A requested revision of the current legislation that addresses the freedoms of the press and the freedoms that affect the media in general – written, electronic, visual, and audio.  This revision is necessary so long as the current legislation does not grant media autonomy nor ensure its rights to expressive freedoms, or the independent freedoms of information gathering and publication, or the right of the media profession to independently organize and unionize.  New legislation is urged to address the autonomy of the Journalists Syndicate, the free exchange of information, and the creation of a comprehensive media syndicate.

4 – A requested inclusion of a Constitutional text that will enshrine the freedom and autonomy of the media as well as the freedom of the press in specific.  In this regard, the report also requests that international media standards be implemented in domestic legislation and policies concerning the editorial aspects of the media as well as their sources of funding.  Furthermore, the report calls for the revision of the system of ownership that affects State owned media sources, and the enhancement of the relationship between the Egyptian media and Egypt’s citizens – allowing for the individual’s right to the freedom of expression.

5 –A request to open the ownership of media sources and publication to the public – in accordance with the system of notification; thereby allowing for the expressive rights of unions, various parties, other legal persons, and the average Egyptian citizen.  The report also includes a request for the State to revise its ownership of various media institutes so as to avoid the monopolization of the media by any single party or individual.

6 – A request to immediately end the imprisonment of journalists in relation to publication cases along with the sufficing of monetary penalties.  Also, the report suggests that a media charter be created as a guideline for professional media conduct; the revision of legislation and policies concerning relevant administrative  and financial bodies so as to avoid the occurrence of corruption within media institutes; and the creation of internalized monitoring mechanisms within those institutes – including the annual self-publication of financial reports.

7 –A request to eradicate all of the impositions restricting open access to information, and the institutionalization of legislation that will promote transparency and the open and easy access of citizens to all of the information that is relevant to public interest. The report requests that legislation be issued to protect the public right to access information to the extent that it is fully compatible with a democratic society.

8 – A request to end the Shura Council’s direct control over the media and the creation of an autonomous national council responsible for the management of media affairs.

9 – A request to end all restrictions currently imposed upon the freedom of expression, the freedom of the press, and the freedom of broadcasting, and the free and open exchange of information.  Also, the report requests that decisions to close down the operations of satellite television channels be issued from a judicial authority and not be implemented as a mere administrative action.

10 – A request to enhance the standard of living of media professionals by ensuring their economic and social well-being and the establishment of a minimum wage.

The full report can be downloaded, in Arabic, here.

Photo by AP: Egyptian journalists gag their mouths with tape during a protest in front of the Journalists Syndicate in Cairo, Egypt, May 9, 2012.