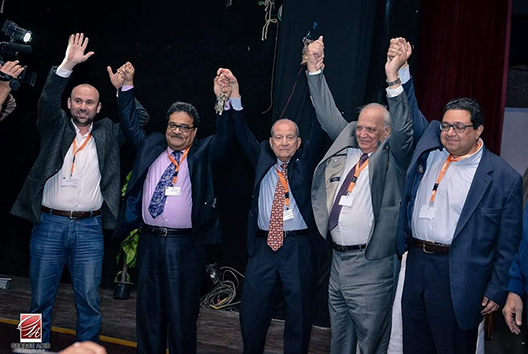 With an edge of just four votes, Farid Zahran and Bassem Kamel secured the two top posts in the first-ever elections held for ESDP president and vice president on April 1. After five years as president, party founder 76-year-old Mohamed Abul Ghar decided he did not want to run for a second term, saying the time was ripe for a new, younger leadership to take over. Only 800 members of the ESDP’s General Congress were allowed to vote in these elections, according to party’s bylaws. Zahran and Kamel won 331 votes, while Farahat and Bahaeedine won 327.

As the results were announced Abul Ghar insisted the winners stand up, hand-in-hand with their rivals, Nour Farahat and Ziad Bahaaeddine, amid chants of “the party will remain united.” However, this may be easier said than done considering Zahran and Kamel’s narrow victory which left the party split into two. On one side are Zahran and Kamel’s supporters—a predominantly left-leaning group which believes the ESDP should be more outspoken in opposing the policies of President Abdel Fattah al-Sisi and living up to its principles. On the other are Farahat and Bahaaeddine’s supporters—a predominantly reformist group which believes the current political and economic difficulties facing Egypt require the party to rally behind the president, and that the ESDP should avoid being dubbed an “opposition” party.

Zahran and Kamel’s victory makes it likely that the more conservative party members who voted for Farahat and Bahaaeddine will follow in the footsteps of previous conservative party members—quitting the ESDP or joining rival parties. When then-Defense Minister Abdel Fattah al-Sisi decided to run for president in early 2014, the party witnessed its first major split. After a critical internal vote, the party decided neither to support Sisi, nor his only opponent, Hamdeen Sabbahi. As a result, several key members, especially Coptic businessmen, joined the Free Egyptians Party, founded by business tycoon Naguib Sawiris.

After Sisi’s election, citing concern over the threat Egypt was facing from the Brotherhood and terrorist groups like the Islamic State (ISIS or ISIL), the conservative, and mostly elder members of the party said it was not the right time to oppose the president. The younger membership, however, held more radical views, saying that the ESDP should remain loyal to the demands of the January 25 Revolution. They demanded a more outspoken opposition to Sisi’s policies, pointing to the arrest of dozens of young men and women on charges of violating the Protest Law (approved under the leadership of former ESDP founding member and then Prime Minister Hazem al-Beblawy), deteriorating economic conditions, and increasing restrictions on freedom of expression and the media.

Party founder Abul Ghar, who writes a weekly column that’s usually critical of the government’s policies, tried to hold the middle ground. “We are neither an opposition party, nor a pro-government party,” he said in a recent interview. “When the president does something good, we support him, and when he adopts what believe are wrong decisions, we speak out against those decisions,” he added. However, the long-time opponent of Mubarak admitted while awaiting the results of elections of a new president on April 1 that, “the security agencies do not like us very much.” He added, “That’s why we don’t get any support from businessmen anymore.”

Zahran and Kamel’s narrow victory is indicative of the hard work ahead of the party’s new leadership to convince the half of the party members who did not vote for them that they will not radically change the party’s stances.

Lack of funds and declining support from businessmen are key problems facing political parties founded after January, 2011, especially those who are not wholehearted supporters of Sisi. With the exception of three parties—Sawiris’ Free Egyptians; the Wafd, headed by Sayed Badawi who owns a pharmaceutical factory and a television station; and The Nation’s Future headed by 24-year-old Mohamed Badran, seen several time with Sisi and who has openly admitted to receiving funds from tycoon businessmen—the majority of Egypt’s parties face major financial difficulties, and struggle to pay the rent for their few offices.

The ESDP is no exception, and in addition to these problems facing most small parties in Egypt, the party must also contest with the splits within its ranks. The bad blood between the two camps was evident shortly after the election results were announced, despite attempts to portray a jubilant and united scene. After leaving the stage, former ESDP Secretary-General, Ahmed Fawzy, a lawyer and human rights activist, who supported Zahran and Kamel, was involved in a heated argument with Tamer Nahas, a party leader and key supporter of Farahat and Bahaaeddine. The argument escalated to the point of Fawzy spitting in Nahas’ face, with other party members intervening to separate the two.

“Being a leftist is not going to influence the way I will preside over the party,” Zahran told reporters after results were announced. “Yes, I have always been a leftist, but my ideas have evolved in order to match those of the ESDP and its membership. I will not exclude anyone, and am proud of every party member,” he added. Zahran also appealed to both Farahat and Bahaadeddine to continue offering their experience and proposals to the ESDP.

A leading member of the ESDP and supporter of Farahat and Bahaaeddine who requested anonymity was not fully convinced. The voting in of a new Secretary-General during the same elections—Khaled Rashed, who belongs to the more conservative camp within the ESDP—was not enough to keep the reformist camp satisfied  “We lost two experienced figures who could have benefited Egypt and the country,” she said in reference to Farahat, a veteran legal expert and law professor at Zagazig University, and Bahaeedin, who is a respected economist and served as deputy prime minister in the first government formed after Morsi’s ouster. “We did not need a president who knows nothing but leftist slogans and populist policies,” she told MENASource. The leading ESDP member said, nevertheless, that her camp would not necessarily leave the party right away, adding that they would wait and see.

Several incidents in the immediate aftermath of the elections indicate further trouble lies ahead for the party. ESDP deputy head Hana Greis announced his resignation from his post, but would remain a member of the party. Saleh Kamel, another deputy head, submitted his resignation from the party. He said, however, that he had handed over his resignation to Abul Ghar in March and they agreed to wait until after the elections to announce it. Abul Ghar, meanwhile, declined a request by the new president to chair the party’s Board of Trustees. The fallout from the altercation between Fawzy and Nahas is growing. Fawzi has also been accused of trying to physically attack a member of the party’s supreme committee. Only the future will tell if the ESDP will remain united, or will suffer more splits over political and personal grounds, as the case has been with the majority of Egypt’s political parties.