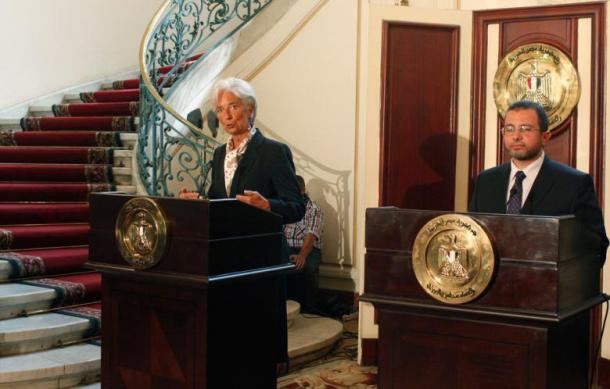 With negotiations over Egypt’s potential IMF loan resuming, the argument over Egypt’s economic situation and its need for foreign assistance has returned to the forefront of public debate. Egyptians refer to the IMF’s financial support as “the loan”, while IMF’s senior officials describe the assistance as financial and technical support, using the Fund’s experience to facilitate the historic transition the country is undergoing.

While an agreement has yet to be reached on the form the assistance will take, it is likely that, if provided, it will be through the IMF’s Precautionary and Liquidity Line (PLL), a relatively new instrument introduced to provide a line of credit, which serves as a form of insurance for a country. If agreed upon, the PLL will involve a qualification process and ex-post conditionality “aimed at addressing the remaining vulnerabilities identified during qualification.” This means that Egypt must not only meet certain qualifications, it would also be expected to agree to conditions to be carried out after receiving the loan. The IMF lists five areas which are assessed during the qualification process:

The country must also have “sound economic fundamentals and institutional policy frameworks”, and must be “currently implementing and has a track record of implementing sound policies” and be “committed to maintaining sound policies in the future”. As for the conditionality, the IMF states that “a quantified macroeconomic framework underpinned by indicative targets would allow assessment of a country’s progress toward meeting its program objectives.”

Since the resumption of negotiations, a swelling resistance has emerged opposing the loan. One initiative has even called for Egyptians to place their own money in a national fund, as an alternative to the IMF loan, in order to finance projects. The initiative, while well intended, does not address a fundamental question: who will supervise the fund? How do we isolate it from historical misuse and corruption? Under the banner of “economic independence”, Egyptians are being asked to do dip into their savings, taking on the government’s own responsibilities, and simply assume that their money will be wisely spent. Once again, they are being asked to tighten theirs belt and give the government a free ride, as though most of Egyptians already enjoy a decent standard of living.

Many believe that the reluctance to accept an IMF agreement is rooted in the fund’s historical reputation of imposing conditionality over the country in a way that breaches its national sovereignty and sometimes leads to devastating results for certain segments of society. This historical reputation is amplified by the lack of transparency on the part of Egyptian government officials, and in some cases, by local media. This explanation, while true, tells us only part of the story. The other part is related to an atmosphere of anxiety that prevails among Egyptians regarding their country’s future, let alone its near future. Key words Egyptians associate with the IMF loan include “devaluation”, “austerity measures”, “rationalization and the like, thus creating an understandable apprehension towards these types of agreements.

Opponents to the loan also mistakenly view it as a continuation of Mubarak-era policies while in fact, it is the complete opposite. Under Mubarak, the Egyptian pound was tightly managed in spite of the floating regime to which the Central Bank of Egypt (CBE) shifted in 2003. Consequently, the pound remained stable throughout the following years. Additionally, no austerity measures were applied by successive governments during the Mubarak era. Even with the fiscal deficit reaching unprecedented levels, the previous regime continued to bribe Egyptians with wasteful, unfair and unsustainable subsidies. Increasing public wages (even if they were immediately eaten up by inflation) and providing free or cheap access to a collapsing health, education and transportation system were also a core part of the Mubarak-era policies. So where do these words – devaluation, austerity and rationalization – fit in here?

It is true that Mubarak and his team’s policies led the country to where it is now, but this does not mean that these are the same policies that Egyptians fear now. Egyptians primarily oppose the loan because it does not come within a complete clear, well designed and transparent framework. Most Egyptians do not know what the IMF agreement, if concluded, would mean for their daily lives, nor do they understand how it would ease the country’s current economic situation. Egyptians are simply confused and lost between those who defend the IMF loan by underlining the country’s desperate need for money, and those who see the agreement as nothing more than a nice ribbon to be placed on an already solid frame, just to make Egypt look more attractive to foreign investors.

Clearly, Egypt is facing considerable challenges and needs to jumpstart its growth and reduce its twin budget and balance of payments deficits. But what Egyptians are in desperate need of is information, confidence and transparency. This calls for the government to adopt a new approach in policy making, one that is based on openness, disclosure and enhanced communication with the society at large. Government meetings should be open to the press. Free access to information and data (including the state budget) should be everybody’s right. New laws and major decisions should be subject to public discussions, keeping those agreed upon behind closed doors to a minimum.

In regards to the IMF loan specifically, this would involve full disclosure of the agreement’s terms and conditions, an explanation of the economic program detailing how the money will be used, its implications on citizens’ everyday lives and, last but not least, honest identification of viable alternatives, if any, to increasing Egypt’s external debt. Egyptians do need to proactively participate in shaping the future of their country. They need to be able to see the light at the end of the tunnel, and trust their leaders’ willingness and ability to finally put the country back on the right track.

Hoda Youssef is an economic analyst at the European Bank for Reconstruction and Development (EBRD). She holds a Ph.D. in Economics from Sciences Po Paris School and has aquired experience through her work in both academic and policy making institutions (Princeton University, the World Bank, the European Commission, Cairo University, the Free University of Brussels (ULB) among others).