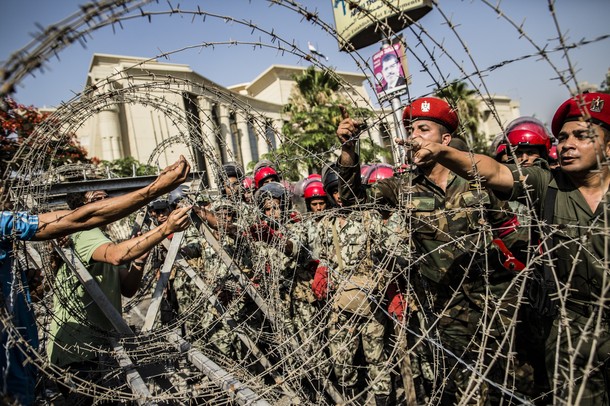 On June 14, Egypt’s Supreme Constitutional Court (SCC) issued a game-changing ruling that dissolves both houses of Parliament, effectively handing legislative authority to the ruling Supreme Council of the Armed Forces (SCAF). Egypt’s political landscape is in complete disarray, transformed by a military power grab that bears all the hallmarks of a full-blown coup. But perhaps the most devastating effect of the court’s decision is the impact it will have on the process of drafting a new constitution.

It’s understandable that much of the media attention is focusing on the final round of Egypt’s presidential race, which is, after all, the most competitive and polarizing election in its history — and stands to become even more so after a second SCC ruling upholding Ahmed Shafik’s disputed candidacy. But there is much more at stake right now than the country’s highest office. Egypt’s democratic transition cannot be completed without the drafting of a new constitution to institutionalize and protect the freedoms demanded by the protesters in Tahrir Square, and also restrain the powers of a military establishment and executive branch that have held civil society hostage for the past 30 years.

The stakes could not be higher, yet the outcome has never been more uncertain. The Parliament, now legally void, was responsible for forming the Constituent Assembly that will write Egypt’s post-revolutionary constitution — a task it finally completed on June 11 after three months of partisan wrangling. But now, some legal experts are arguing that the newly elected Constituent Assembly should be automatically dissolved along with the Parliament that created it. Even if the Constituent Assembly is still legally valid, it had alread come perilously close to collapse within hours of its formation, after liberals and leftists began resigning in droves over complaints that Islamists had been given too many seats.

The Constituent Assembly’s current legitimacy crisis is almost identical to the one that derailed its predecessor in March, when Isalmists won over 65 percent of the seats on the assembly. Just like the new assembly, the previous one was immediately assailed by political and religious minorities as unrepresentative. Liberals and leftists resigned en masse, leaving a third of the seats vacant. The dysfunctional body was dissolved by a court ruling on April 10, sending the constitutional process back to square one.

Then, after months of gridlock, the ruling Supreme Council of the Armed Forces (SCAF) issued a June 5 ultimatum that gave political forces 48 hours to agree on new criteria for selecting the members of the constituent assembly. Otherwise, the council warned, it would unilaterally intervene to expedite the process with a new constitutional declaration of its own. Under intense pressure from the SCAF, Islamists led by the Brotherhood’s Freedom and Justice Party (FJP) reluctantly reached an agreement with minority liberal and leftist political parties on June 7, requiring a 50-50 ratio of Islamist to non-Islamist members. The agreement also reduced the number of assembly seats reserved for sitting MPs to 39 from 50, a concession to non-Islamists seeking to curb the Islamist-dominated Parliament’s influence over the assembly.

The compromise was initially hailed as a breakthrough, raising hopes that the stalled constitutional process might finally be resuscitated. But a day later, the fragile truce broke down in a dispute over how the vague conditions negotiated in the unwritten agreement would be implemented in practice, leaving Islamists and non-Islamists to argue fiercely over the gray areas. For example, was the 50-50 ratio meant to apply only to the 39 elected MPs on the assembly, or to all 100 members? More importantly, neither the agreement nor the law specified how institutional representatives with an Islamist or partisan affiliation would be counted. For example, would a union representative belonging to the Muslim Brotherhood count toward the Islamists’ 50-seat quota? If not, it would be entirely possible for Islamists to obtain a majority in the assembly simply by padding the 61 seats reserved for professionals, youth, public figures, and representatives of state institutions with salafis and members of the Brotherhood.

Although Parliament formally elected the assembly’s 100 members in a joint session on June 13, the voting process was overshadowed by the absence of 57 independent, liberal, and leftist MPs who boycotted the session over allegations that the Muslim Brotherhood’s Freedom and Justice Party (FJP) is still determined to monopolize the Constituent Assembly.

If Islamists are not in fact seeking to dominate the Constituent Assembly — as FJP leaders have repeatedly insisted — they are certainly not helping their case by nominating Counselor Hossam Ghariani, head of the Supreme Judicial Council, to chair the Constituent Assembly. Ghariani has close ties to the FJP — his name turned up on the party’s short-list of potential presidential nominees in March — and his leadership will not be reassuring to liberals and minorities.

For all these reasons, the two-day-old Constituent Assembly was already widely viewed as illegitimate even before the SCC decision called into question its legality. The Egyptian Bloc coalition, representing most of the non-Islamist forces in Parliament, already vowed to forfeit its seats, and prominent independent MPs are also jumping ship. Even Cairo’s High Constitutional Court has withdrawn its nominee for the assembly to avoid "taking sides." But the most ominous harbinger of the assembly’s imminent collapse is a rumor that the SCAF’s own representative, Mamdouh Shahin, had decided to give up his seat — even though the military has repeatedly intervened to expedite the constitutional process.

With the People’s Assembly legally paralyzed until new elections are held — leaving the SCAF with legislative authority in the meantime — Parliament will be powerless to prevent the military from hijacking the constitutional process if and when the newly elected Constituent Assembly falls apart.

Even after new parliamentary elections are held and the legislature is reinstated, the legal authorities of the next Parliament will be in doubt. As Nathan Brown has noted, the election of a new Parliament would actually eliminate the mechanism for selecting a constituent assembly, since the interim constitution explicitly tasks "the first Parliament" after the revolution with choosing the body. As if the SCAF weren’t already salivating at the opportunity to issue a new Constitutional declaration — recasting the rules of the transition on the military’s terms — this provision gives the SCAF or the next president a perfect excuse to clarify the confusion with a unilateral decree, a dangerously authoritarian move that could trigger a backlash as powerful as the one seen last January. The SCC decision gives the SCAF even more ammunition to justify a new Constitutional Declaration that would outline procedures for electing a new Constituent Assembly under military supervision. The SCAF is rumored to be working on a draft already.

Whatever the status of Parliament, the SCAF will not stop trying to intervene in the drafting process. The SCAF has maneuvering for months to build a legal firewall around its political and economic privileges, with limited success until recently.  But with Parliament suspended, the SCAF has a golden opportunity to intervene in the selection of a new Constituent Assembly, in a desperate last bid to hardwire its interests into the new constitution before relinquishing power to a civilian president — after an election that the SCAF insists will take place as scheduled on June 16-17.  If Shafik, a military man himself, wins the presidency, he will likely be sympathetic to the SCAF’s efforts to secure a safe exit from the the political scene, possibly including immunity from prosecution. But the Brotherhood’s candidate, Mohamed Morsi, would be far less forgiving of the generals, who stand accused of grave human rights violations. Now that the Brotherhood is under scrutiny for its alleged role in the deadly Battle of the Camel last year, Morsi has good reason to save his own image by sacrificing the SCAF on the altar of revolutionary justice.

With the SCAF poised to intervene in the constitutional process, will Egypt’s next president stand by and allow the military to enshrine its privileged status in the new charter — extending temporary martial law into a military dictatorship — or will he support revolutionary demands for civilian oversight of the armed forces?

Although Egypt’s next president will have no official role in the constitutional process, he is sure to wield considerable influence. While Mohamed Morsi, the FJP candidate, shares the Brotherhood’s long-term goal of implementing a full parliamentary system, he favors a gradualist and pragmatic approach to reform. Morsi has publicly advocated the amendment of Article 5 of the 1971 constitution, which deals with presidential powers, to curb the executive’s authority "in preparation for a full parliamentary system sometime in the future." But even if Morsi takes a relatively hands-off approach to the drafting process, a new Constituent Assembly once again dominated by Islamists might well push ahead with plans for a parliamentary system or a strengthening of the religious clauses with little resistance from the president.

Ahmed Shafik, a former air force head who briefly served as Mubarak’s prime minister before his resignation in February 2011, is the candidate most closely associated with the former regime. As president, Shafik will be subject to intense scrutiny from those who view him as a supporter of the old order, meaning that any attempt to consolidate power in the executive branch could backfire explosively. But while Shafik will find it hard to obstruct efforts to limit presidential authority and shift the balance of power in Parliament’s favor, he is nonetheless wary of adopting a full parliamentary system, which he views as too volatile. Shafik’s views are a reflection of the military establishment’s interest in curbing Parliament’s power in order to shield itself from civilian regulation and budgetary oversight.

Either candidate, if elected, will need to play a constructive role in advancing the inclusive national dialogue necessary to produce a durable and legitimate constitution that reflects genuine compromise between the cornucopia of interest groups — Islamist, liberal, socialist, revolutionary, and secular — that must learn to share power peacefully in a new political environment of unfettered and unpredictable pluralism. Major points of disagreement — the composition of a constituent assembly that has yet to be formed, the relative powers of Parliament and the presidency in the restructured political system, and the role of religion vis-à-vis the state and society — will need to be thoroughly debated and resolved in order for the constitutional process to yield a document that is respected by all social and political forces.

After two disastrous attempts at forming a Constituent Assembly, Egypt’s constitutional process is in danger of implosion and cannot afford to go off the rails again. It is almost certain that the Constituent Assembly will need to be re-elected for a third time, probably under the SCAF’s supervision. Islamists and non-Islamists will need to redirect their energy from partisan bickering by focusing on their common interest: Preventing military intervention in the new legal framework. The SCAF understands that the new constitution will only survive if the body that writes it is sufficiently neutral and diverse, and it will face intense pressure to ensure that the Constituent Assembly meets liberal and minority demands for adequate representation. The bigger problem will be containing the military’s role in the constitution. Whatever the structure of the constitutional process to come, political forces will need to suspend their mutual distrust and unite around their shared objective: Writing the blueprint for a civilian democratic system and new social contract built on rule of law, accountability, and justice.

Mara Revkin is the editor of EgyptSource, a project of the Atlantic Council’s Rafik Hariri Center for the Middle East. Yussef Auf is a sitting judge in the Egyptian judiciary and a 2012 Humphrey Fellow at American University’s Washington College of Law. He holds degrees in Law and Islamic Studies from Cairo University, where he is currently pursuing a PhD in Constitutional Law and Political Systems. This piece was originally published in Foreign Policy.