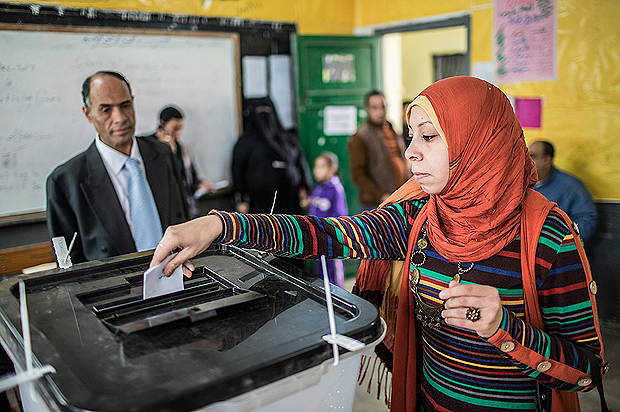 Following weeks of violence, casualties, allegations, and counter-allegations, Egyptians voted in the first leg of a referendum on an Islamist-backed draft constitution.

This is not just about a draft constitution; in a way it is a mandate about President Mohamed Morsi and his party, the Muslim Brotherhood, and their respective popularity or lack of it on Egyptian streets. If the final result of the first round of the referendum is that only 56.5% voted yes, despite Islamists’ previous predictions that at least 70%  of Egyptians support them, then the Brotherhood, according to its own statistics, cannot claim to be the majority (in 10 major governorates), and should stop labelling the opposition as “undemocratic minority” that is “deterring” democracy. Not to mention the fact that the Salafis backed them by mostly voting yes, a voting alliance that will turn into a competition in the next parliamentary election.

According to most updated figures,  it seems the three big governorates  (Cairo, Alexandria, and Gharbia) were deeply divided between the Islamists, who support the new draft constitution, and non-Islamists, who reject it.  All media outlets, including the Brotherhood website, confirmed that Cairo was dominated by a no-vote on the constitution. This is a huge blow to President Morsi. The president, who recently changed his home address from Sharqyia to Heliopolis in Cairo, has to live in a constituency that rejects his vision for the country. Graffiti covering the presidential palace walls tells  the story more bluntly than any in-depth analysis.

Images of long queues in front of polling stations did not reflect the turnout, but point rather to the shortage and likely inefficiency of the judges in running the polling stations. Some voters went even further. They accused the election committee of deliberately delaying voting in disputed areas in the hope of putting people off and persuading them to leave without casting their votes.

The results from the South of Egypt (Aswan, Assiut, and Sohag) are very alarming as they highlight Egypt’s  sectarian divide, each casting well over 70% of the votes in favor of the constitution. It could be an indication of voter fraud, or an indication that many Muslims voted yes, not to support the constitution, but rather to oppose the Christian vote (most of whom voted no). If Egypt is still in a two-year democracy, many are not willing to let it progress further and want it rather to be plunged into a tribal, sectarian divide. What is even more alarming is how the Brotherhood’s own media indirectly incited feelings against the Copts, supplying inaccurate information about their involvement in the referendum.

Although stage two will take place in many rural regions of Egypt, it is not a done deal for the ‘Yes’ camp as many predict. Despite a healthy turnout, it seems that 68% of eligible voters decided to boycott the whole process, or are simply apathetic to the vote. The opposition has a week to focus and spread awareness among the boycotters. If some refuse to cast their votes out of disaffection (towards both Morsi and the opposition) or simply because they think their vote would not matter, the opposition should work to change this mindset. The fact is, Islamists have already reached their maximum support, but the opposition has not yet reached its full potential.

Despite the Brotherhood’s claims of a perfect referendum process, there have been countless reports of irregularities throughout the country, including 26 polling stations in 4 governorates lacking judicial supervision.  The hasty rush to proceed with the  referendum, despite many judges boycotting it, has cast a huge shadow on the whole process. More importantly, it will make it more difficult for the president and the referendum committee to refute the claims of fraud. Already Monitoring and human rights groups are demanding a re-run of the first round because of rampant irregularities. I doubt the government and election committee will agree, but these statements would place the second stage of the referendum under more scrutiny.

Last night’s attack on the Wafd Party headquarters and previous attacks on many Muslim Brotherhood offices, in addition to Friday’s violence in Alexandria should all be viewed as part of the slow disintegration of law and order in Egypt. Rather than working on restoring law and order, the Brotherhood has been busy pointing fingers and blaming a “third party.”  The road toward a failed state starts with citizens losing respect for government institutions.

Regardless of the final outcome of the referendum, this is not the result President Morsi and the Brotherhood should celebrate. This referendum has done the opposition a great service by highlighting its strongholds around the country, and its potential in the next parliamentary election. It has also exposed the myth of the Brotherhood’s high popularity, particularly in urban areas, and the truth of its dependency on Salafi support in rural areas. It is a sad state of affairs for Egypt as a country, but it could be the beginning of a much-needed political awakening for many ordinary Egyptians. Morsi should wake up from his delusions and start to seek much-needed consensus to prevent Egypt from spiraling down the path of a failed state.