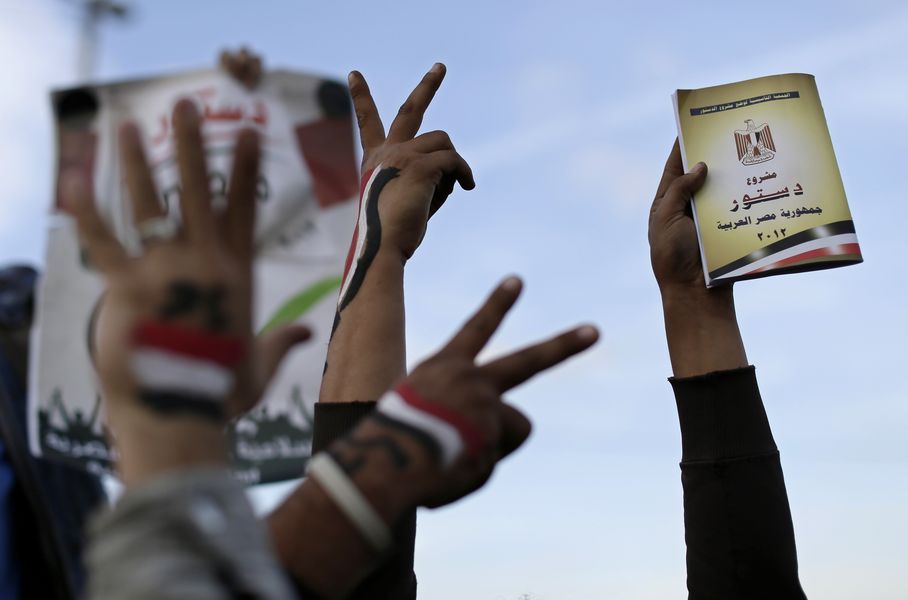 Meghan L. O’Sullivan writes for Bloomberg that the opposition’s decision to galvanize for a ‘no’ vote is welcome, but sees it as the only positive change in the current crisis facing Egypt:

“By forcing through the referendum this weekend on a document that has raised concerns about fundamental rights and around which there has been no public debate, Morsi is inviting prolonged civil strife, which has already led to the delay of the delivery of a $4.8 billion International Monetary Fund loan that Egypt so desperately needs.”

O’Sullivan’s suggestion is for the opposition to continue to push for changes to be made to the constitution after the referendum is complete. While this was offered by Morsi’s administration earlier this month, the details of the offer were never made clear:

“Morsi and the opposition should agree that the draft constitution, if ratified in tomorrow’s vote, will later be subject to a comprehensive review. In a specified period of time, Egyptian political forces would reconvene in a special session — perhaps involving another constituent assembly — to rework the constitution, which would again be subject to a referendum.”

How Islamist is Egypt’s would-be constitution?

“Article 219 (defines the aspects of Sharia on which laws will be based) and Article 4 (states the supreme scholars committee of Al-Azhar, the country’s highest Islamic institution, should be consulted on all matters relating to Sharia. It gives a religious institution the right to meddle in the law-making process, according to legal expert Hisham Nasr.”

Going into more depth on Article 4, Rashwan explains in practical terms what al-Azhar’s involvement in legislation could mean:

“Submitting laws to Al-Azhar is in itself an encroachment on legislative authority. Laws apply to everyone equally and should not be under the jurisdiction of people who act upon a certain conviction, which means they are not impartial,” human rights lawyer Ahmed Ezzat told Ahram Online.”

Salafist influence can be seen not only in Article 219, but also in Articles 10 and 76 according to statements made by Salafi preacher, Yasser al-Borhami, and a member of the constituent assembly:

"For the aim of protecting society, the draft states that no punishment will be carried out unless there is a crime, after verifying all proof of the crime. This will prepare society to understand and accept Sharia and lead to the gradual implementation of Sharia."

Rashwan’s article goes on to explain what this means in practical terms:

"According to the new format of Article 76, a citizen can be put on trial without a specific law or stating the penalty for crime he is accused of, as now you can directly refer to Sharia for the penalty."

Maher Hamoud’s editor’s letter in Daily News Egypt points to one of the biggest obstacles in ensuring Egyptians vote against the draft constitution. Listening to a conversation between supporters and opponents of the constitution, Hamoud comes to the following conclusion:

“This conversation is a clear example of the complexity of the political sphere at the moment. We’re a nation that seems to be largely against radical Islam, yet we have a strong sympathy towards whatever relates to religion, and in such a folkloric way, that we can be easily manipulated. It is always a difficult conversation for the revolutionaries to have with the average Egyptian during election times.

Both Islamists and the average citizen alike seem to ignore the lesson of the disastrous referendum of March 2011, when Islamists lobbied for a “yes”, saying this would please God, while a “no” would be against Islam. The majority took the bait. The result is what we now live in constitutional and political chaos that the Islamists themselves were suffering from under the 13-months of absolute military rule, before Morsi came to power.”

While most of the opposition is calling for a no-vote, Al-Monitor translates al-Masry al-Youm’s article by Magdy Khalil in which he calls for a boycott instead. In the article, Khalil lists 10 reasons why he believes boycotting the referendum will yield better results for Egypt’s opposition. The first reason points to the constitutionality of the process itself:

“The Constitutional Declaration issued by President Mohammed Morsi, by which he granted immunity to the Constituent Assembly, is void and invalid, and so are its implications. Therefore, voting on this constitution is also invalid, and the last thing we want to do is give legitimacy to a process that is already void.”

“President Morsi called for a dialogue with the opposition and scheduled it for Saturday, Dec. 8, but insisted on holding the referendum on schedule. So what is the point of the dialogue?”

Khalil also cites the fact that a significant segment of the judiciary will not be supervising the referendum, and their replacements are a source of concern for him:

“Those who will oversee the referendum are judges from the Brotherhood and other employees that can be easily persuaded. Nothing guarantees that the referendum will not be forged, in the absence of supervision by an independent judiciary or an international body.”

“The final draft of Egypt’s proposed new constitution, completed in late November, was produced in such a flurry of political maneuvering, threats, and shrill rhetoric that commentators and citizens alike are still trying to understand its implications. From a liberal democratic perspective, there is much to like in the document, especially compared with the one it is replacing. For example, the drafters not only specified a long list of freedoms, as their predecessors did, but also made the wording more difficult for officials to wiggle around. But the document includes just as much that causes concern. It postpones answering the question of civilian oversight of the military until the next constitution is written, years from now. And there are gaping holes and ambiguities that only politics can fill in.”

At the same time, Brown points to five important points that must be kept in mind when considering the draft constitution: the role of legislators and how much the constitution restricts or enables them, the non-Islamist current’s inability to galvanize a vote, the ways in which the elected leadership will affect the deep state, how Islamic provisions will be interpreted as per the constitution, and whether the constitution will be used to limit the president’s powers.

An article entitled “The Founding Brothers” published in The Economist argues that, if approved, the draft constitution would place Egypt back in a similar situation as it was under Mubarak:

“In outline the new draft differs little from the constitution that prevailed until the fall of Hosni Mubarak’s regime. Like the old version it enshrines a powerful presidency and an overweening state, with an elected two-house legislature and an independent judiciary. Its 234 articles contain familiar talk of civic freedoms, individual rights, family values and national identity. Where it differs is in the details, which could give Mr. Morsi’s party, the Muslim Brotherhood, a grip on power not unlike that enjoyed by Mr. Mubarak.”

While the article points to improvements in the constitution – such as guaranteeing protection against arbitrary detention – the vague language and contradictions that appear throughout are cause for concern:

“Workers have the right to form unions freely, proclaims one article, but the next limits them to one union per profession. Freedom of religion is guaranteed, but any insult to prophets will be punished. Article two says that “the principles of Islamic sharia” are the main source of legislation. Yet article four now says that the scholars of al-Azhar, an Islamic university, should interpret sharia, not parliament or the courts. A further clause defines those principles in rigid doctrinal terms.”