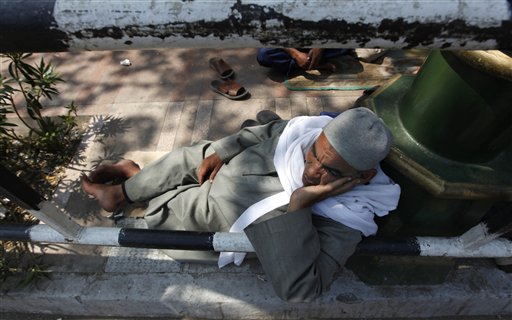 Today, Egyptians began voting in the first truly democratic presidential elections in recent history. Egypt’s next president will face a multitude of challenges, foremost among them the urgent need to revive the ailing economy. Since the January 25 revolution, Egypt’s economy has been languishing under the strain of political instability and lack of security.

Many Egyptians optimistically expected this trend to reverse once a new president assumes power in June. However, the Egyptian economy suffers from structural economic problems that can be traced back decades prior to the revolution, and the comprehensive reforms needed to remedy these deep-rooted problems will take time to develop and implement. The problem of unemployment is one of the most entrenched features of the Egyptian economy, and one that must be prioritized by the next president and those who come after if Egypt is to achieve its economic potential.

Egypt suffers from a high and persistent unemployment rate which has remained above 9 percent for the last two decades and is estimated to have reached 12 percent after the revolution. Unemployment rates are expected to rise even further as a result of Egypt’s youth bulge, a growing demographic that faces scare job opportunities, despite the fact that many achieve a high level of education
A close look at the data reveals that unemployment disproportionately affects youth and educated Egyptians. University-level graduates’ unemployment is high at a shocking rate of 36 percent, while young Egyptians between the ages of 20 and 24 are unemployed at an even higher rate of 47 percent.
These stratospheric unemployment rates can be partially attributed to the fact that Egypt’s labor force is growing faster than the private sector can generate new jobs, forcing many job-seekers to turn to the informal sector. Based on some estimates, employment in the informal non-agricultural private sector represents 53 percent of total employment in the economy. A significant boost in labor demand is needed to decrease unemployment through creating more jobs in the formal labor market, especially for the educated youth demographic.
The front-runners in the presidential race have all proposed plans for dealing with unemployment, but the sweeping structural reforms needed to stimulate job creation could prove difficult to implement in the presence of public pressure for subsidies and other quick-fix welfare policies that can provide short-term (but not long-term) economic relief.
Abdel Moneim Aboul Fotouh, a moderate Islamist and previously a leading Brotherhood figure, has proposed creating a database listing the names of unemployed individuals and their skills along with vacancies in order to link job seekers with employment opportunities. Aboul Fotouh supports providing unemployment insurance that will vary based on place of residence (higher for those living in rural areas and lower for those living in urban areas) and based on a person’s academic qualifications (less for higher degrees). This will be coupled with major industrial and agricultural projects that will be able to provide jobs over the long-run.
Ahmed Shafik, former commander of the air force and briefly Prime Minister during the February 2011 protests, has recommended establishing three authorities to alleviate unemployment. The National Authority for Employment and the National Authority for Training would work to endure that educational programs teach students necessary skills needed to succeed in the labor market. The third authority, to be called the National Authority for Small Enterprises, will support business development in tandem with a decrease in the taxes imposed on small enterprises. Furthermore, Shafik plans to establish special economic zones to generate a large number of jobs in manufacturing and other commercial industries.
Amr Moussa, former foreign minister and former head of the Arab League, has proposed directing public investments towards labor-intensive infrastructure projects. He plans to provide a temporary unemployment insurance equivalent to half the minimum wage, contingent upon the beneficiaries enrolling in vocational training programs to prepare them for the job market. These training programs, if conducted and sponsored by private companies, would cost the government very little.
Moussa also highlights the importance of shifting to a decentralized education system more capable of delivering what is needed to local and regional labor markets within Egypt. Moussa aspires to improve labor market flexibility through reforming labor laws and activating collective bargaining.
Hamdeen Sabahi, an independent leftist and previously the leader of the Karama (Dignity) Party, proposes reform the educational system to ensure a fair geographical distribution of education services and parity in the quality of schools across all governorates. Sabahi also advocates activating the role of labor unions and guaranteeing the rights of workers to legal recourse.
Mohamed Morsi, the head of the Muslim Brotherhood’s Freedom and Justice Party, has proposed creating jobs encouraging an increase in the investment rate to 30 percent of GDP . This will be achieved through providing a stimulating business environment. Morsi’s economic plan also calls for the use of labor-intensive technologies in development projects. He also claims that his plan will reduce unemployment by 3 percent through formalizing businesses currently operating in the informal economy.
The common characteristic running throughout the candidates’ programs is an emphasis on ambitious goals rather than the details and mechanisms for achieving these targets. All of the candidates’ call for increasing the government’s revenues by routing out corruption, increasing taxes, targeting subsidies to the needy, etc, however it is unlikely that these funds will be sufficient to cover their optimistic plans and meet the high expectations of Egyptians, especially in the face of a looming budget deficit that is expected to reach almost 8 percent of GDP for the fiscal year 2012/13. The new president will either be forced to continue borrowing domestically at high interest rates or resort to external borrowing and aid, an option that is becoming increasingly unpopular among Egyptians and in Parliament, which has insisted that foreign assistance cannot be considered until all other options have been exhausted.

Maye Ehab is an economist working for the newspaper al-Watan. She has previously conducted research for the Egyptian Center for Economic Studies (ECES) and served as a visiting fellow for the United Nations Conference on Trade and Development.