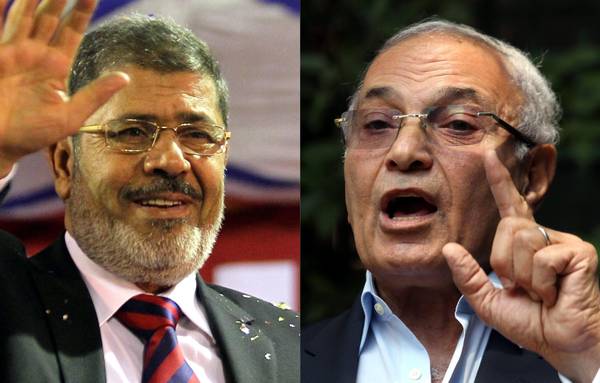 Egypt’s run-off election scheduled for June 16-17 has pitted the Freedom and Justice Party’s candidate, Mohamed Morsi, against the former regime’s candidate-of-choice, Ahmed Shafik, in a fierce competition between the same two political forces that have dominated Egyptian politics for decades: The Muslim Brotherhood and the former ruling National Democratic Party (NDP). Now the historic rivalry between the country’s two most powerful groups has been revived in a new confrontation over Egypt’s presidency. But in a reversal of their traditional roles, the Brotherhood now controls a majority in Parliament and many trade unions, while the remnants of the disbanded NDP are struggling to come back from the dead and reenter the political arena.

For decades, political competition in Egypt was limited to a two-dimensional rivalry between the country’s most organized forces, the ruling NDP and the banned Muslim Brotherhood, which the Mubarak regime tried to suppress and eliminate at all costs. But the January 25 Revolution changed everything, ousting the former ruling party and delivering a parliamentary majority to the Brotherhood’s newly legalized Freedom and Justice Party (FJP).

The NDP was able to maintain control for decades by using the specter of an Islamist takeover by the Brotherhood or even after obtaining a significant bloc of seats in Parliament to intimidate citizens into supporting the regime. Former President Hosni Mubarak trumped up the threat of Islamists to Western interests in the region as a bargaining chip to justify the use of barbaric methods and human rights violations to suppress political dissidents. This same tactic has been adopted by Ahmed Shafik in order to scare voters away from Mohamed Morsi.

The surprisingly large number of votes won by Shafik – even in the Brotherhood’s traditional strongholds in the Delta region – reveals his dependence on the resilient and far-reaching networks of the disbanded NDP, particularly in the Delta and Upper Egypt, where voting patterns are still driven largely by patronage and family bonds. According to the cadres of former NDP members still present in the Delta provinces, it is clear that supporters of the former ruling party played a major role in defeating the Brotherhood as a result of their ability to gather the votes of prominent families in the cities and countryside.

Relying on this tactic, millions of votes are expected to be delivered to Shafik in the run-off. NDP supportesr in regions far from Cairo explained to me that their greatest battle with the Brotherhood would be over the votes of the 54 percent of eligible Egyptians who did not cast ballots in the first round.

It seems to me that the NDP has been able to pull together its cadres and regroup in the thirteen months since the court ruling mandating its dissolution. The resuscitation of the party is not linked to a revival of the Mubarak regime, but rather to the resurgence of the entrenched interests of former NDP officials in different provinces. These are the same interests harbored by Shafik in his fight against Morsi.

Shafik’s campaign is buoyed by the support of prominent businessmen and stakeholders belonging to the network of former NDP officials who are seeking to reassert their interests after a period of hibernation after the revolution. Former NDP members have seized the opportunity to gather and galvanize their supporters across Egypt, especially in the south, where Shafik won a huge number of votes in the first round. Over the course of the campaign season, numerous meetings have been held in all Egyptian cities in an effort to resuscitate the networks of the former regime. Shafik’s supporters are trying to remind voters of the FJP’s disappointing performance in Parliament, the Brotherhood’s broken promises and the threat that Islamists will convert Egypt into a new model of the religious state.

In all of his press conferences and television appearances, Shafik has consistently attacked Morsi by recalling the Brotherhood’s mistakes over the years especially their past use of violence, in an effort to intimidate voters and particularly Coptic Christians with the specter of a religious state under the Brotherhood’s rule.

Shafik will probably win hundreds of thousands of additional votes from Copts and other frightened opponents of the Brotherhood who view him as the only alternative to a religious state. He is also likely to win over the lion’s share of supporters of leftist presidential candidate Hamdeen Sabbahi who favor a civil state, putting Shafik in a stronger position heading into the run-off. Calls by activists for a boycott of the election will likely play into the hands of Shafik not Morsi.

On the other hand, the Muslim Brotherhood is seeking to coordinate between various political parties and movements to rally revolutionary forces behind Morsi. But despite the Brotherhood’s best efforts to portray Morsi as the candidate of the revolution, he does not quite fit the mold, and political forces will have a hard time unifying now after fifteen months of controversy and infighting. Furthermore, revolutionary forces do not want to throw their weight behind Morsi for free, first because he was not their ideal candidate, and second because they fear the Brotherhood will break its promises yet again.

But still, despite a flurry of meetings and initiatives in recent days, the various revolutionary forces have not coalesced behind Morsi, with the exception of the Islamist parties of the Salafis and al-Gama’a al-Islamiyya.

The main crisis of the Brotherhood revolves around its voter mobilization apparatus, which was operating at maximum capacity during the first round of the election, yet won only 5.5 million votes. The Brotherhood does not have the capacity to win more votes without negotiating an agreement with other political forces to support Morsi.

This fight is being played out in the Egyptian media, waged with particular ferocity by elements of the former regime who are trying to persuade voters that the run-off represents a battle between a religious state led by Morsi and a civil state under Shafik. But fundamentally it is a final battle between the revolution (represented by Morsi) and the former regime (represented by Shafik), and at the heart of this fight is a revenge battle between the Brotherhood and the NDP.