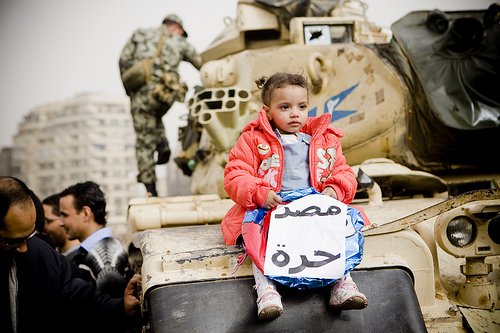 Egypt’s army has gone to great lengths to distance itself from the political arena since President Mohamed Morsi wrested power from the Supreme Council of the Armed Forces (SCAF) almost a year ago. Eighteen months of SCAF-rule left the army’s reputation tarnished with accusations of human rights abuses on the part of the military itself, and absolute impunity on the part of its military leaders. The most recent statement by Minister of Defense Abdel Fattah al-Sisi, issued ahead of the scheduled June 30 protests against Morsi, shows an army that appears willing to inch back into the political arena, without explicitly stating which side it is actually on.

In his speech, Sisi said, “The armed forces have stayed out of political matters in the recent past, but our national and moral responsibility towards the people obliges us to prevent Egypt slipping into a dark tunnel of civil unrest and killing, sectarianism and the collapse of state institutions.”

This is the second time in under a year that the military has warned of the risk of Egypt heading toward a “dark tunnel.” Last December, in the wake of deadly clashes at the presidential palace, leaving at least six dead, the armed forces issued a statement calling on political parties to engage in dialogue. The December statement also said that the army would “not allow” Egypt to slip into a dark tunnel, and called on finding a solution that does not contradict “legitimacy and rules of democracy.”

While the choice of words—legitimacy and democracy—seemed to be an indication that the army would stand with the elected president, it was welcomed by both members of the Muslim Brotherhood’s Freedom and Justice Party and the liberal al-Dostour Party.

Sisi’s recent statement is both threatening and vague. For the first time since Morsi assuming power, it is a far more explicit indication of the army’s willingness to reenter politics if need be.  However, it also says the army would not allow an “attack on the will of the people.” It remains unclear if Sisi considers the “will of the people” to be the ballot box, or to the planned June 30 protests to withdraw confidence from the elected president.

The reactions of the FJP and the opposition coalition, the National Salvation Front (NSF) highlight the ambiguity of Sisi’s statement. Both falling on opposite sides of the June 30 protests, they each welcomed the army’s statements. The presidency, however, was quick to issue statements informing the public of meetings between Morsi and Sisi, during which they discussed the army’s role in protecting “strategic sites” during the protests, and followed up with an additional statement denying any signs of a rift between the presidency and military.

Although the SCAF—and by extension the military’s reputation—took a hard hit during its transitional reign, many Egyptians still hold the army in high standing, as evidenced by the results of the recent Zogby Research Services Poll. (It showed a 94 percent confidence level in the army across all sectors of society.) There have even been calls for a military takeover, particularly in the wake of the March 2013 court ruling that sentenced twenty-one defendants to death on charges of killing over seventy football fans in Port Said last year. The calls, while by no means widespread, have resonated over the past few months, and one group of activists claimed to have collected 1 million signatures in support of military rule.

The Defense Minister, however, is a Morsi-appointed man, who jumped rank when his predecessor Mohamed al-Tantawi was forcibly retired by the president. His latest statement, while taken by some as an indication of the military’s disapproval of Morsi and his government, it is more likely disapproval of the entire political spectrum. With fear of violence breaking out on June 30, Sisi’s comments are a warning to both Islamist and secular politicians, as well as to protesters galvanized to take to the streets on Morsi’s one-year anniversary.

Sisi’s statement benefits none more than the army itself. It shows a military straddling the fence, ensuring that no matter the outcome, it can say that it was on the right side of history. As the January 25 uprising came to a climactic end on February 11, 2011, the military made sure it appeared it was on the people’s side. Both statements issued by the army in the past six months seem to be sending two messages: to the nation’s politicians and leaders, it is a warning, emphasizing in particular that a lot can be achieved in the week leading up to the protests. To the people, it curries favor, once again painting the image of the army that first took to Egypt’s streets after Mubarak stepped down, welcomed with open arms by its nation.

What remains to be seen is whether or not Sisi and the military will play a more pro-active role behind the scenes, encouraging Morsi to broker a deal with the opposition. Forcing a compromise, one which gives in to opposition demands—removing the prosecutor-general, amending the constitution and the electoral law—could, on the one hand, serve to dissuade the political opposition from taking to the streets. On the other, it will do little to dissuade Tamarod from going forward with a June 30 protest. If the army is to push for a compromise, Egyptians will once again face a scenario similar to post-February 11 Egypt: politicians and military brokering deals, while revolutionary youth who have animated the street, are once again left out in the cold.