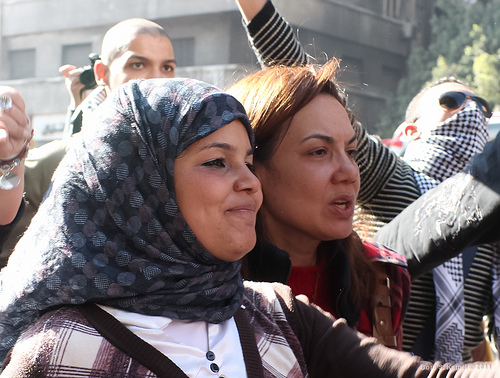 For the first time, Samira Ibrahim’s positive demeanor cracked in public. It was Sunday, March 11, 2012 – just over one year to the date since her arrest. The 25-year-old activist has become a symbol for the struggle that Egyptian women have endured, in the face of continuing hardships and human rights abuses.

On March 9 2011, Ibrahim was one of 18 women detained by the army, following a violent crackdown on a demonstration in Egypt’s now famous Tahrir Square. Months later she broke her silence on the events that had allegedly taken place during her detention, namely that she and other female activists were subjected to the now infamous ‘virginity tests’ she accused army doctors of carrying out.

While initially the army denied any knowledge of this practice, an Egyptian general later admitted that the incident had in fact taken place, stating that it had been carried out as a precaution. The general, who refused to be named, told CNN, "We didn’t want them to say we had sexually assaulted or raped them, so we wanted to prove that they weren’t virgins in the first place." Ironically, a procedure that was allegedly undertaken to preempt rape claims was itself an act of sexual assault.

Since then, an Egyptian court has banned the practice altogether. That victory, however, was short-lived. The only defendant brought to trial, Dr. Ahmed Adel al-Mougui, was acquitted last Sunday, March 11, amidst harsh criticism from both Egyptian activists and international human rights groups.

Even the charges brought against him were relatively benign and sidestepped the issue of sexual violence at the heart of this case. The charges made no mention of sexual assault, but rather accused al-Mougui of carrying out an indecent act in public as well as neglecting military orders. To further add insult to injury, appearing on an Egyptian television talk show that same evening, al-Mougui’s lawyers announced their plans to file a lawsuit against Ibrahim for defamation.

The verdict was anticipated by Ibrahim and her lawyers, particularly since the trial took place in a military court. It has also led to expectations for a similar outcome in the investigation into the deaths of over 20 Coptic protesters the night of October 9, 2011 during clashes with the army, in what has come to be known as the Maspiro Massacre.

Samira Ibrahim’s case can now be added to a long list of examples of the government’s lack of accountability, whether it be that of the Supreme Council of Armed Forces (SCAF) itself, of a cabinet that has been unable to inspire any confidence in the general Egyptian public, or of the newly elected parliament.

In Ibrahim’s case, the court relied on testimony. In other cases, however, human rights violations have been caught on video – from a police officer congratulating a colleague on shooting a protester in the eye to a young woman whose clothes were torn off as she was surrounded and beaten by soldiers. Despite the glaring evidence, and because the government has begun to set a precedent, hope is waning that justice will be served and this failure to hold those responsible accountable since SCAF assumed a position of power in February last year, continues to frustrate and hinder the work of activists.

The few police officers who have stood trial for the murder of protesters during the 18-day uprising last year have been acquitted, while countless others have yet to see the inside of a courtroom at all. Many Egyptians perceive these trials as elaborate, but poorly disguised, productions of political theater to appease the general public.

The forecast is far from optimistic. Clashes continue to erupt in downtown Cairo intermittently – spurred on by everything from the death of 74 football fans in Port Said to the violent dispersion of a small Tahrir sit-in.

Denying any wrong-doing appears to be the modus operandi of choice whether by SCAF, the Ministry of Interior, or even by select members of parliament who echo the well rehearsed line that no live ammunition was used in clashes between police officers and protesters.

After the verdict was delivered, Ibrahim posted on Twitter, "No one violated my honor. It is Egypt whose honor has been violated. I will continue until the end, to restore Egypt’s rights." In her bid to do just that, Ibrahim has announced that she will be taking her case to the African Commission on Human and People’s Rights.

Despite the odds, there are still some in Egypt who believe justice will prevail. The victories thus far, however, have been short-lived, and few and far between.

N. M. is an Egyptian writer who preferse to remain anonymous.