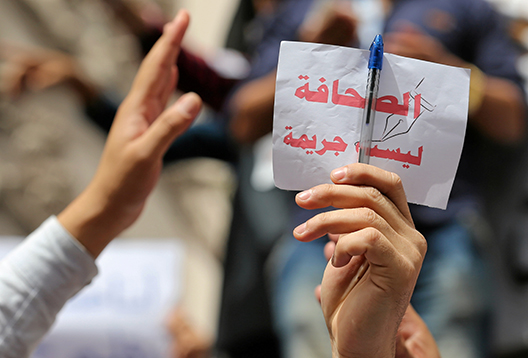 Journalist holds up a sign, which reads: ''Journalism is not a crime'', during a protest against restrictions on the press and to demand the release of detained journalists, in front of the Press Syndicate in Cairo, Egypt May 4, 2016. (Reuters)

On May 1, police raided the headquarters of Egypt’s Press Syndicate in downtown Cairo and arrested journalists Mahmoud al-Sakka and Amr Badr. The incident is the latest development in a period of mounting tensions between journalists and the government in the wake of the April 25 public protests against the state. The protests, which were planned against Egypt’s decision to transfer the Red Sea islands of Tiran and Sanafir to Saudi Arabia, were also preceded by dozens of arrests, with estimates that at least 100 activists were arrested in one day. Another 168 were said to have been detained on April 25 itself, including around a dozen journalists, who were later released.

Badr and Sakka had organized a sit-in on April 29 at the Press Syndicate’s headquarters in response to the raiding of their private residences by security forces for the second time in a month. In a Facebook statement announcing the sit-in, Badr called on syndicate leaders and other journalists to participate in solidarity. In the statement, Badr explained that family members told him on the morning of April 29 that security forces had arrived at his residence with a warrant for his arrest and that they had confiscated his private property, including his personal laptop, camera, books, and archival documents. In addition to the sit-in, Badr planned to file a formal complaint against the Interior Ministry and Qaliubiya Security Director.

Who are the two arrested journalists?

Amr Badr is the Editor-in-Chief of Bawabet Yanayer (January Gate), an independent news website which is critical of the government, and Mahmoud al-Sakka is a contributor to the same website. The two men are known for their coverage of both the 2011 uprising as well as the Tamarod movement that led to the ousting of Mohamed Morsi in 2013.

Badr was editor-in-chief of Tahrir Newspaper from 2011 to 2013, after which he went on to found Bawabet Yanayer.

The pair was also among the founders of the political movement Bedaya in 2015, which called for, among other things, the repeal of the protest law and the restructuring of the Interior Ministry. The Cairo Court for Urgent Matters banned Bedaya less than a year after it was founded.

Sakka, who was also Tamarod member, was detained for several months last year on charges of belonging to an illegal group known as the January 25 Youth. Prior to his arrest, Sakka had published an article on the Bawabet Yanayer criticizing Egypt’s parliamentary elections.

What charges are they facing?

On May 2, according to state-run news agency MENA, state prosecutors involved with the case stated that the two journalists, as well as seven others working for Bawabet Yanayer, were under investigation for “using fake news” to incite protesters to “clash with police forces and storm public and vital establishments.” Prosecutors ordered Badr and Sakka detained for 15 days pending investigations on charges that included, among others, spreading false news, plotting to suspend the constitution, inciting the public, and plotting to overthrow the regime.

In a May 3 statement, the prosecution explained that a standing arrest warrant from April 19 for the two journalists and seven others had been based on assertions by security forces that the nine “possessed firearms and Molotov cocktails with the aim of carrying out attacks on police, army forces, and vital facilities.” According to the same statement, police investigations yielded evidence that they had propagated “false news and rumors to incite the public through social media outlets in the lead up to Sinai Liberation Day celebration on April 25.” The prosecution also ordered a media gag on coverage of the case, which it said would remain in place until investigations are complete.

How have local stakeholders responded to the raid and escalating standoff?

Press Syndicate and Local Newspapers: Press Syndicate head Yahia Qallash immediately decried the raid as “unprecedented,” telling a local news outlet that around 50 security personnel had raided the syndicate in the arrest effort. The Interior Ministry denied its officers had stormed the syndicate building in an official statement, saying that eight security officers presented Badr and Sakka with an arrest warrant. Qallash condemned the actions of the Interior Ministry, calling for the immediate resignation of Interior Minister Magdy Abdel Ghaffar, and organized a General Assembly meeting to investigate the incident.

At the meeting on May 4, which was attended by over 2,000 syndicate members, the Press Syndicate demanded a presidential apology for the incident and urged the government to release all detained journalists. The Syndicate also echoed Qallash’s call for the dismissal of the Interior Minister, threatening to strike if the demands were not met. Included in a plan of action announced at the meeting was a call for all newspapers and news websites to publish a banner reading “No to gag orders … No to the restriction of press freedom,” an order to refrain from referring to the Interior Minister by name, and an order to only use his inverted image. The syndicate called on state-run and independent papers and news websites to implement the decisions. The syndicate also decided that newspapers should publish black front pages on May 8 to protest escalating attacks on freedom of the press, though it remains unclear if newspapers carried out this decision.

Many outlets complied, including privately-owned Al-Shorouk and Al-Wafd, as well as state-affiliated Youm7, which ran the headline “No defeat…No breakdown” in a nod to the lyrics of a revolutionary song. State-owned news agency Al-Ahram, did not participate and was openly critical of the syndicate’s efforts, running a headline in which it called the meeting a “failure” on its front page. State-owned Al Akhbar did not take adopt Al-Ahram’s critical stance, but also did not join in the efforts. Coverage of the syndicate meeting appeared under the headline, “A journalistic uprising protesting the storming of the syndicate.”

Interior Ministry: During the syndicate meeting, security forces restricted access to the building and surrounding area, banning non-union members from entering. A day earlier, internal ministry memos accidentally leaked to the press included recommendations that the ministry not back down in its stand-off with the press syndicate and outlined the ministry’s strategy in addressing the crisis. One leaked memo characterized the stand-off as a “deliberate escalation” by the syndicate, and accused certain syndicate members, including syndicate head, Qallash and Freedoms Committee head Khaled al-Balshy, of using the incident for political motivations. The memo added that “a ferocious media campaign should be expected by all the press in solidarity with the [syndicate],” and outlined a communications strategy to boost the public image of the ministry, stressing that “(the ministry) cannot retreat from this position now; a retreat would mean a mistake was made, and if there was a mistake who is responsible and who is to be held to account?”

Pro-Sisi Supporters: Supporters of President Abdel Fattah al-Sisi were present at the site of the syndicate meeting on May 4 in protest of the media’s position, chanting “Long live Egypt” and shouting insults at syndicate members.

NCHR: After the syndicate’s General Assembly meeting, Egypt’s semi-governmental National Council for Human Rights (NCHR) criticized what it called “violations against the freedom of press and media,” adding in a statement that it “condemns the [intrusion] in terms of arresting journalists for freedom of expression reasons, as well as imposing gag orders that block the right of citizens to be up to date with all public opinion issues.”

Local Rights Groups: Nineteen local rights groups, including the Association for Freedom of Thought and Expression, The Egyptian Initiative for Personal Rights, the Cairo Institute for Human Rights Studies, and Journalists Against Torture issued a joint signed statement on May 3 in which they condemned the raid, calling it “the latest in a series of arbitrary measures and orchestrated campaigns against journalists.” The organizations demanded the “immediate release of all journalists detained in connection with their professional duties and the dropping of all charges against them” while urging professional syndicates around the world to support Egypt’s Press Syndicate against the ongoing “assault” by the state. It also called for those responsible for the storming of the syndicate, including the interior minister, to be held accountable.

Parliament: In a session on May 4, several MPs criticized the Press Syndicate’s demands for a presidential apology and the dismissal of the Interior Minister. Speaker Ali Abdel-Al said that Parliament’s Media and Culture Committee should serve as an arbiter in the dispute between the syndicate and the Interior Ministry, expressing his hope that the committee would work to find common ground between the two parties and prepare a report to be discussed by parliament. Abdel-Al also objected to use of the terms “storming” or “raid” to describe the incident, saying that framing was an exaggeration. Other MPs lashed out at the syndicate’s board for what they described as exploiting the incident in order to tarnish Sisi’s image.

How has the international community responded?

United States: US State Department Spokesperson John Kirby said in a press briefing on May 2 that he was “aware” of the incident and added that the State Department will continue to “urge Egypt’s leadership to uphold the people’s basic rights to freedom of expression, which we believe, again, is the basis of a democratic society.” When asked if the United States had discussed the matter with Egyptian authorities, Kirby offered no specifics, but emphasized that the US government routinely discusses its concerns with the Egyptian government about these issues.

The European Union: The European Union issued an official statement in which it condemned the raid, calling it “a worrying development” that “continues a trend of restricting space for civil society and the freedom of expression, as manifested by the high number of arrests following the April protests.” The statement also advised that detained journalists should be released and that “law regulating assembly should be brought in line with the Egyptian Constitution.”

Tunisian Press Syndicate: Tunisia’s National Press Syndicate expressed its solidarity with Egyptian journalists, saying in a statement on May 4 that it would stand with fellow journalists against “the unjustified attack they are subjected to.” The statement referred to the raid as a “vicious attack” on journalists. The statement also added that the Egyptian government should be held “legally and ethically responsible” for crimes against members of the press, citing the detention of journalists, the forced disappearances of others, and raids on private residences, among other violations.

Front Line Defenders: In a May 6 statement, Front Line Defenders “strongly condemned” the arrest of Amr Badr, referring to the journalist as a “human rights defender.” The statement also decried the “criminalization of civil society in Egypt” and called for an “immediate end to the persecution of human rights defenders, reiterating the essential role of their work in the development of a just and equal society.”