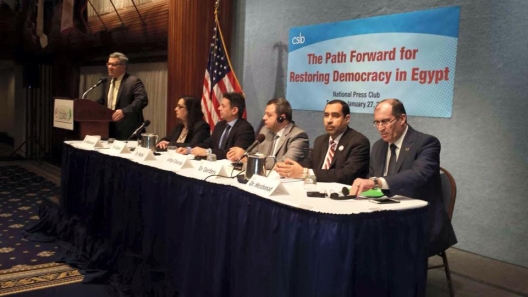 A delegation of Egyptians in opposition to the current government arrived in Washington, DC on January 25 to meet with representatives from universities, research centers, and think tanks, as well as the US Department of State. The delegation represents the so-called Egyptian Parliament in Exile , a body affiliated with the Muslim Brotherhood, and the Egyptian Revolutionary Council (ERC), both formed in late 2014 in Istanbul, Turrkey. The ERC describes itself as comprising different political anti-coup, pro-January 25 affiliations. The visit generated a backlash from the Egyptian government, as well as a flood of misinformation in Egypt and the United States on the details surrounding it. Below is a Q&A with clarifications on the facts.

Who was in the delegation?

Walid Sharabi is a former judge and spokesman the Judges for Egypt, a group of reformist judges, originally known for calling for judicial independence under ousted president Hosni Mubarak but later associated in Egypt with the Muslim Brotherhood, both during their rise to power and following former President Mohamed Morsi’s ouster in July 2013.  The  group was also referred to a disciplinary committee for publicly supporting Morsi’s November 2012 constitutional decree, which among other actions, gave Morsi immunity from any judicial oversight or action. Sharabi is currently Secretary General of the Egyptian Revolutionary Council. He was dismissed as a judge in January 2014 for his presence at the pro-Morsi Raba’a al-Adaweya sit-in since his presence was viewed as publicly taking a political stance, a violation of the judicial authority law. Sharabi was removed as a judge after he had left Egypt for Qatar. He is a graduate of Egypt’s police academy, and worked at the Ministry of Interior for two years, after which he became a judge in 1997.

Maha Azzam is an Associate Fellow in London-based Chatham House’s Middle East and North Africa Program, Chatham House specializing in political Islam, Middle East politics, and the ideology of al-Qaeda. She is currently on sabbatical.  She heads the Egyptian Revolutionary Council, and is involved in efforts petitioning the International Criminal Court to investigate President Abdel Fattah al-Sisi, and the military-led interim government that came to power after Morsi’s ouster, for crimes against humanity. She is also chair of the anti-military group Egyptians for Democracy UK.

Gamal Heshmat is a prominent member of the Muslim Brotherhood and the NASL, and belongs to the Brotherhood’s 110-member legislative body, the Shura Council. He was opposed to the Brotherhood decision to nominate a presidential candidate from within its ranks, and voted against it in the Shura Council. He is the Deputy of the Egyptian Parliament in Exile. He was elected to the first post-January 25 parliament as a member of the Freedom of Justice Party (FJP), from Damanhour, and was deputy of the Foreign Relations Committee. He also served as a Brotherhood-affiliated member of parliament under former president Hosni Mubarak from 2000-2003. He was imprisoned by the Mubarak government in 2009. He accused Egyptian authorities of orchestrating the September 2014 bombing at the Egyptian Foreign Ministry in an attempt to implicate the Muslim Brotherhood in violent activities.

Abdel Mawgood al-Dardery is a member of the Muslim Brotherhood and was a Freedom and Justice Party Member of Parliament in the 2012 parliament representing Luxor. He headed the Foreign Relations Committee. He is a founding member of the group Parliamentarians against the Coup, formed in 2013. He has visited the United States on previous delegations, including as an FJP Member of Parliament. He also made several trips to Europe while in parliament in 2012. He is US educated, having received his doctorate in cultural studies from the University of Pittsburgh in 2000.

Sarwat Nafei was recently elected speaker of the Egyptian Parliament in Exile. He served in the Shura Council elected under Morsi, and describes himself as a liberal. During a public event held at the Press Club, he claimed he was an opponent to Morsi and the Muslim Brotherhood. In a 2013 article, he made the following remarks: “All that we have seen from the media is that president Morsi is another face for an Islamist regime, which is not true. I would disagree with his group, with the Muslim Brotherhood’s ideology, but he was actually a liberal, open-minded, democratic president.”

What was the delegation’s program?

The group held private meetings at various organizations and think tanks in Washington DC. They also held a meeting at the US Department of State. State Department Spokesperson Jen Psaki said, “The meeting was attended by a deputy assistant secretary for democracy, human rights, and labor, and other State Department officials.”

Following the visit to the US Department of State, Sharabi shared on social media a photo taken inside the building, flashing the pro-Brotherhood Raba’a sign.

They also took part in a public event at the National Press Club, organized by the Center for the Study of Islam and Democracy (CSID). The panel was moderated by the organization’s President  Radwan Masmoudi.

Azzam said that “What we face in Egypt today is a military dictatorship.” She added, “The present regime, after the coup has done everything to ensure that citizens do not demand their rights.”  Nafei claimed that there was no “no threat of a religious state,” in Egypt, saying this perception had been “fabricated by the military regime.”

A full recording of the event can be viewed here.

Prior to coming to Washington, the delegation took part in events organized by the group Egyptian Americans for Freedom and Justice (EAFJ), a non-profit organization founded by Egyptian-Americans opposed to Morsi’s July 2013 military ouster. They took part in public events in New Jersey and Florida, a rally in New York, as well as two events organized by the supporter in the Egyptian-American community in Virginia and Maryland.

Who sponsored the visit?

According to Amin Mahmoud, a board member with the Center for Egyptian American Relations, the visit was organized and partially-funded by EAFJ, as well as by donations collected from within the Egyptian-American community in Washington DC. Visits to other cities were also funded by donations from within the communities.

What has the US State Department said about the visit?

US State Department Spokesperson, Jen Psaki, said the delegation’s visit was not sponsored by any US organizations, contrary to initial US government statements.  Psaki had twice said on January 29 and January 30 that Georgetown University had organized and funded the trip. In a State Department Press Briefing on February 2, Psaki, however, clarified that Georgetown had not organized the visit. “The meeting was set up by the Center for the Study of Islam and Democracy, a nonprofit. So the visit was not funded, as you know, by us or the US Government, but it was also not funded by Georgetown,” she said.

What was the delegation’s official position on the visit?

The Muslim Brotherhood published on its English-language website, Ikhwanweb, an official statement following the delegation’s visit. The statement claimed they held meetings with “representatives from the White House, the US State Department, members of US Congress, and a number of American research centers.” The statement added that the meetings “ended in a recommendation for further constructive meetings and dialogue to clarify the true picture of what is happening in Egypt.”

What has the Egyptian Ministry of Foreign Affairs said about the visit?

Egyptian Foreign Minister Sameh Shoukry said that the United States should respect Egypt’s court ruling designating the Muslim Brotherhood a terrorist organization. In a statement, the ministry accused the ERC and the Parliament in Exile of issuing false statements about the situation in Egypt. The Muslim Brotherhood has not been designated as a foreign terrorist organization under US law. In a statement published on February 3, the ERC claimed the Foreign Ministry statement “proves that the current regime cannot even tolerate those outside Egypt putting their case to policy makers, academics and civil society.”

Have there been other Egyptian reactions to the visit?

Writing for The Hill, Dina Khayat criticized the visit saying, “The meetings were feebly explained away as an effort to engage with all factions of Egyptian politics. Nevertheless, US officials should have been aware of the powerful signal such a meeting would send to the organization. When red carpet treatment is proffered, at the very least it spells out an absence of condemnation – if not outright support.”

Writing for Al Masry al-Youm, Mohamed Salmawy also criticized the visit, saying that the Brotherhood is not a political organization, but described it instead as a clandestine organization. He added that the visit “confirmed the double-standards of US policy in the Middle East.”