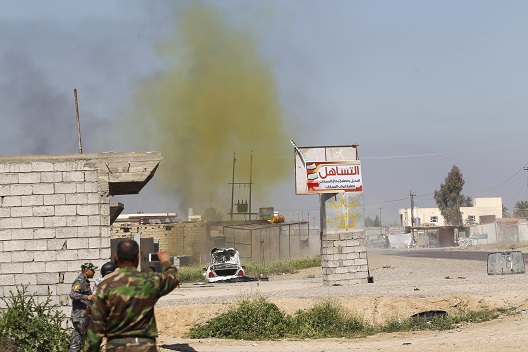 Days after the terror attack in Paris, French Prime Minister Manuel Valls told the French parliament the Islamic State (ISIS or ISIL) presents a “risk [to France] of chemical or bacteriological weapons.” That same day, US and Iraqi officials said that ISIS is “aggressively pursuing the development of chemical weapons,” recruiting experts for and establishing a branch dedicated to its research and experimentation. ISIS has pursued and allegedly used chemical weapons in the past, but in light of the recent terror attack in Paris and the downing of the Russian aircraft in Egypt, this tactic poses a potentially significant threat, both regionally and internationally.

In June 2014, ISIS seized Saddam Hussein’s chemical weapons complex, Muthanna, where the Iraqi government believed about 2,500 chemical rockets remained. US officials insisted that the weapon stockpile was useless and that attempts to use or transport the materials would be very dangerous. Nonetheless, when the Kurdish People’s Protection Units (YPG) claimed ISIS used chemical weapons in Kobani in July 2014, they alleged that these chemical weapons came from Saddam’s facility.

The United States acknowledged ISIS’s aspirations to acquire chemical weapons when on January 30, 2015 it announced the killing of ISIS militant and former employee at Saddam’s Muthanna facility Abu Malik, also known as Salih Jasim Muhammed Falah al-Sabawi. Of the 6,000 ISIS militants coalition air strikes had killed up to that point, Abu Malik was the first announced death. CENTCOM’s press release stated, “His death is expected to temporarily degrade and disrupt the terrorist network and diminish [ISIS]’s ability to potentially produce and use chemical weapons against innocent people.”

A Period of Experimentation

ISIS has reportedly, though not all confirmed, conducted several attacks with chemical weapons. Iraqi Kurds assert that laboratory tests prove ISIS had used a “weaponized form” of chlorine gas during a January 23 car bombing, where “[a]bout a dozen Peshmerga fighters experienced symptoms of nausea, vomiting, dizziness or weakness.”

During a period of fighting near the Mosul Dam on June 21 or 22, an ISIS mortar used against another group of Peshmerga forces reportedly caused similar symptoms. Conflict Armament Research (CAR) Executive Director James Bevan concluded the mortar was likely filled with chlorine.

The Syrian Observatory for Human Rights (SOHR) and Kurdish YPG claim that ISIS first used “makeshift chemical projectiles” in Syria on June 28 near Hasaka city. CAR field teams later confirmed the use of such weapons in two attacks that day. One projectile struck YPG fighter positions northeast of Hasaka city, resulting in the hospitalization of twelve Kurdish soldiers with “breathing difficulties, sinus problems and streaming eyes…followed by below the waist and temporary paralysis.” The soldiers also reporting smelling “a powerful chemical [odor]…like rotten onions.” Also on June 28, a mortar struck a civilian home in Hasaka city, resulting in similar symptoms. CAR testing confirmed residue of PH3, typically used as a fumigating agent, at these locations. In response to these findings, the CAR director concludes that ISIS has “obviously been experimenting with different types of devices they can manufacture” using munitions and materials already on hand.

ISIS experimentation progressed in August 2015. The German Defense Ministry reported the Pershmerga forces they were training fell victim to another ISIS chemical weapons attack near the city of Irbil in Iraqi Kurdistan. The Germans suspected that chlorine from mortar or artillery shells likely caused respiratory problems. US intelligence officials, however, quickly suspected that ISIS in fact used a mustard agent on August 12. After further investigation, a field test confirmed that shell fragments did contain HD residue, known as “sulfur mustard.” This was the first indication that ISIS had access to a Schedule I agent—a substance strictly banned under the Chemical Weapons Convention.

The Syrian Network for Human Rights (SNHR) corroborated the SAMS statement, reporting that ISIS had attacked Marea with fifty two artillery shells and missiles on August 21, a number of which contained toxic gases. SNHR reported not less than seventy-six individuals hospitalized with symptoms like those in the SAMS report. SNHR also reported a similar attack in Mar Abkarba on September 1, with eighteen poison-filled missiles resulting in these symptoms in thirty-seven individuals. An October 29 Organization of the Prohibition of Chemical Weapons (OPCW) confidential report on the Marea attack concluded “with the utmost confidence that at least two people were exposed to sulfur mustard … [and it] is very likely that the effects of sulfur mustard resulted in the death of a baby.”

The most recent alleged ISIS chemical attack took place on August 31 north of Mosul. In that incident, the Kurdistan Region’s Security Council reported a homemade ISIS rocket produced “a ‘considerable amount’ of yellow smoke resulting in the hospitalization of one Peshmerga soldier.

Amid an apparent progression of ISIS’s experimentation with chemical weapons, questions arise over how the group obtains these agents. An ISIS fighter Omar Yilmaz asserted on Tumblr that ISIS had captured its stockpile of chemical weapons from the Assad regime. Although the OPCW declared all regime category weapons destroyed as of August 28, 2014, OPCW inspectors reported finding traces of sarin and VX nerve agent at a Syrian regime military research site on May 8, 2015 giving credence to Yilmaz’s claim. Meanwhile, some assert these weapons came from the Muthanna, where the Saddam regime’s “big operation” was mustard gas.

The United States, however, believes ISIS manufactures crude mustard gas weapons in a powder form, according to the BBC on September 11. A US official said the intelligence community believes ISIS has “an active chemical weapons little research cell that they’re working on to try and get better at it.” The November 19 statements that ISIS is “determined to produce chemical weapons” simply reasserts a known reality, which bears greater gravity in the wake of the Paris attacks.

Given the progression of ISIS’s chemical weapon capabilities up to this point, former head of the British International Terrorism Intelligence Team Colonel Richard Kemp realistically states, “I think some of these terrorists recognize that while chemical weapons may or may not cause mass casualties, they would spread enormous panic.”

ISIS likely does not have the capability to conduct a large scale chemical or biological attack at this point inside Syria and Iraq, let alone the Western world. In line with ISIS’s pattern of taking advantage of opportunities to conduct foreign attacks, ISIS may use chemical weapons when the opportunity arises. As the attack in Marea demonstrates, while far less deadly compared to conventional weapons, the mere threat of chemical weapons can instill a unique sense of terror. Such attacks would likely result in few casualties, but increased panic would contribute to the migration and refugee crisis as populations seek safe haven.

Andrea Taylor is an Associate Director at the Rafik Hariri Center for the Middle East.

Image: A chlorine-tinged cloud of smoke rises into the air from a bomb detonated by Iraqi army and Shi'ite fighters from Hashid Shaabi forces, in the town of al-Alam in Salahuddin province March 10, 2015. (Reuters)