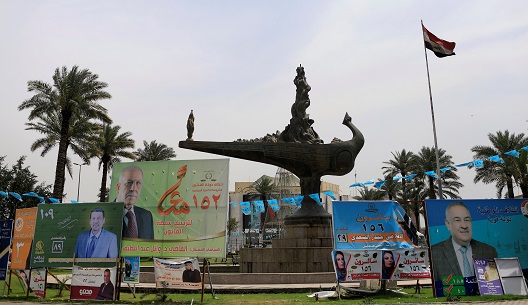 Iraqi citizens will vote in their fourth parliamentary election on May 12th, 2018, since the 2003 US invasion to remove Saddam Hussein from power. There is an increase of cross-sectarian and pro-reform parties this election. Experts predict this will prevent a single coalition from winning an outright majority in parliament, and that alliances will likely be formed after elections in order to gain a majority and elect a prime minister.


While Iraq has declared victory against ISIS and the US closed down its command office for ground troops in the country, US officials have stated that the battle is not over. The terrorist group condemned the elections, and threatened to attack polling stations along with those who run for office or vote. Less than a week before the elections, it continues to claim responsibility for attacks in Iraq, including the assassination of a parliamentary member in the town of Qayyarah.

Years of battle have wreaked havoc on Iraq’s economy. Millions are internally displaced, entire cities are in need of reconstruction, and sectarian tensions rise as Popular Mobilization Forces (PMU) militias—with varied affiliations and allegiances—no longer have ISIS as a common enemy to unite them. The question remains whether these paramilitary groups will be integrated into the Iraqi army or disbanded and disarmed, and what conflict may break out before this decision is made.

Additionally, both Sunni and Kurdish politicians expressed concerns that the election is being held too early, with many of Iraq’s displaced unable to return home and cast their votes. As a result, they say the final result may not reflect the will of the Iraqi people. The Iraqi government, however, argued that postponing the elections past May 12 would violate the constitution and hinder Iraq’s democratic process.

Currently, there are five major Shia coalitions in contrast with the one coalition, United Iraqi Alliance, that formed in 2005.

The prominent religious cleric Ammar al-Hakim broke publicly with the Islamic Supreme Council of Iraq, forming the Wisdom party (Hikma), seeking to lead a new “non-Islamic national movement” and to end his close cooperation with Iran. He highlighted in his rhetoric the need for a political movement that involves citizens from around the country and includes all Iraqi people, possibly using the least sectarian language of any of the Shia coalitions.

Alliance of Revolutionaries for Reform

Following the unsuccessful Kurdish referendum of September 2017, the Iraq government seized Kirkuk and oil fields from the KRG. This resulted in significant divisions among Kurdish parties. That, along with economic drivers, also resulted in widespread protests across the Kurdistan region in March.

Coalition for Democracy and Justice

The popularity of Gorran, along with the newly-created the New Generation movement could further split the Kurdish vote.

The loss of Kirkuk following the referendum attempt was a loss of a major population center in terms of electoral votes for the Kurds, so as a result they are expected to lose seats. In 2014, Kurds won 62 of 329 parliamentary seats because it also included Kirkuk, Nineveh, Diyala and Baghdad, however, since losing these disputed areas, KDP announced that there will be no participation in areas outside of the autonomous region due to the absence of Kurdish security forces to protect voters. Because of this, the Kurds now have only 46 seats reserved in Iraq’s parliament for the three provinces of Erbil, Sulaymaniyah, and Dohuk, officially constituting the autonomous region.

Despite these setbacks, the Kurds will still play a valuable role in post-election alliances if they are able to present a united front during negotiations over the formation of a new government. Incumbent Prime Minister Abadi who has responded aggressively towards the Kurds following the referendum has softened his rhetoric and visited Sulaimaniya, Erbil, and Dohuk as of April 25 in an apparent attempt to garner their support in post-election alliances. His Nasr coalition even opened offices in Kurdish cities and are running Kurdish candidates on its lists.

Sunnis are expected to have a much weaker presence in the election than Shia not only due to divisions between their parties, but also due to the displacement of populations from the war against ISIS. Sunni-dominated provinces suffered the worst destruction during the war, and as a result, Sunni leaders requested a six-month delay in elections arguing that with the large number of IDPs, constituents would not have enough time to gather paperwork and update personal information in time for voting.

Sunnis feel a distrust of traditional Sunni politicians right now as they believe many of them have been profiting from IDP relief and post-ISIS reconstruction sent to Sunni provinces hit hardest by ISIS. This distrust has resulted in many Sunnis joining forces with Shia coalitions. There are two main Sunni parties taking part in the 2018 elections:

Audrey Bolus and Savannah Carter are interns at the Rafik Hariri Center for the Middle East.

Image: Photo: Campaign posters of local candidates are seen ahead of the parliamentary election in Baghdad, Iraq May 3, 2018. Picture taken May 3, 2018. REUTERS/Thaier Al-Sudani