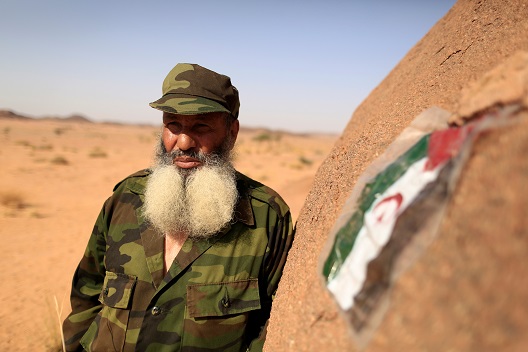 Photo: Mohamed al Wali, 65, a Polisario fighter, stands next to a Sahrawi Arab Democratic Republic flag at a forward base on the outskirts of Tifariti, Western Sahara, September 9, 2016. REUTERS/Zohra Bensemra

Western Sahara was occupied by Spain until 1975, when the United Nations pushed Spain to decolonize the country. At Spain’s withdrawal, Morocco and Mauritania each claimed control of the region along their borders, triggering a war between the countries and the creation of the Sahrawi nationalist movement, led by local dissidents who formed the guerrilla Polisario Front. The Polisario led a fight against Morocco and Mauritania which ultimately resulted in the creation of the UN peacekeeping mission MINURSO, established to monitor a ceasefire agreement brokered in 1991. Under the ceasefire, the Moroccon government consolidated its control and currently administers two-thirds of the region.

The main opposition to Moroccan governance is the Sahrawi Arab Democratic Republic (SADR), a state apparatus of the Polisario that claims Western Sahara’s independence and runs its government out of Algeria. SADR also holds two offices in Spain: one in Madrid and another in Barcelona. According to a local source, SADR partisans took part in local Catalan demonstrations and raised the flag of the SADR movement, raising the profile of their campaign by visibly tying it to the Catalan referendum movement.

In contrast to the Spanish government’s support of Morocco and its autonomy plan for Western Sahara, Spain’s left-wing parties empathize with the Sahrawi nationalist movement. Catalan President Puigdemont’s Catalan European Democratic Party has long supported self-determination for Western Sahara, as well as movements  against the Moroccan government such as the Hirak—a movement resulting from the popular protests in the Moroccan Rif region. Moroccan officials refused to meet with the Catalan president earlier this year due to the support of the Catalan government for the Rif contestations. Additionally, in November 2016, the left-wing Podemos-Unidos, the third largest party in Spain, pushed for the Spanish government to come up with a strategy that would enable a referendum process in Western Sahara.

The efforts of pro-Catalan independence political actors in Spain to bolster their own position by encouraging similar movements could ultimately have an impact on Western Sahara’s separatist movement. It is unclear how a referendum in Western Sahara would move forward, but it could have the same destabilizing effect recently seen in Spain and Iraqi Kurdistan. The threat of regional unrest triggered by such a move could motivate the Moroccan government to more vigorously pursue peaceful negotiations with SADR.

Morocco could capitalize on the referendum-driven chaos in Spain to argue that its Western Sahara autonomy plan is the reasonable path forward, contrasted with an undeveloped self-determination movement. Sahrawi nationalists may also be discouraged by the failure of the referendum in Spain. At a time when the Moroccan government is scrutinized over its poor handling of the Rif contestations and its lack of strategy in providing sensible solutions for the grievances of the Moroccan population, it could take control of the dialogue by focusing on improving the situation in Western Sahara. To do so, the government will need to focus on open negotiations, in order to avoid a situation where the opposition sees no choice but to risk a referendum.

Mariam Elatouabi is a Youth Delegate at the United Nations and chairwoman of ‘Josoor’ an NGO in the MENA region advocating for dialogue and cooperation in the Middle East through youth empowerment. She tweets @MariamElat.