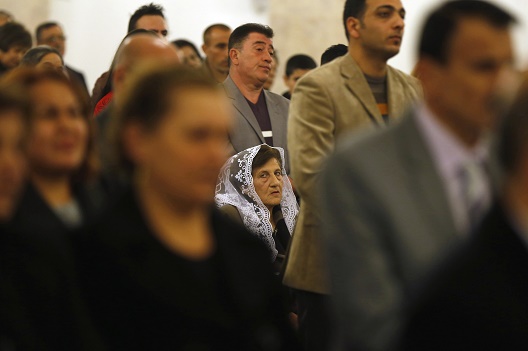 The quagmires of Syria and Iraq have forced millions to flee, both internally displaced people and new refugees escaping across borders. The international community is failing to meet their needs, with UN agencies announcing cuts in food programs due to a lack of funds. Ethnic and religious communities have suffered attacks from terrorist extremists, militias, and the Assad regime because of their identities. Just as media attention has alerted the world to the Islamic State’s (ISIS or ISIL) destruction of cultural heritage in Syria and Iraq, so too should it look to the human cultural dimension under threat.

Among the suffering, Christian communities in Syria and Iraq must contend with incredible pressures. In the cradle of Christianity, Syrian and Iraqi Christians face an existential threat. On a recent visit to Beirut, Christian refugees from Syria and Iraq conveyed tragic personal stories: a sobering conversation that demonstrated the vulnerability of Christian communities. Despite cheerful dispositions, their outlook for their countries and their faith community was grim.

The Syrian Christians came from Homs, Hama, Aleppo, and Damascus, and the Iraqis from Nineveh Plains. Each of the Christians, like millions of Syrian and Iraqi Muslims, had gut wrenching tales of experiencing unimaginable violence and the difficult decision of leaving their homes for an uncertain future. The Syrian Christians feel caught in the crossfire between the Alawite regime of Bashar al-Assad and terrorists like ISIS and al-Nusra, and Iraqi Christians were forced to flee the onslaught of ISIS. As the numbers of Christians in Syria and Iraq has dropped (dramatically so in Iraq), their departure represents the gradual erosion of religious diversity and the fading of historic communities founded in the Middle East.

When asked if they had hope they could someday return, the answers were “no.” The Damascenes spoke about the constant bombardment and the fear that ISIS would raid the Christian neighborhoods. Images of crosses being torn down in Mosul, the spray-painting of the Aramaic letter “N” to identify Christians, and the threat of “convert or die” were burned into their minds. For those from Aleppo, they are all too aware that ISIS controls half the city and inches closer to the Christian quarter, shelling churches during Easter. The former residents of Homs said that the conflict has rendered their city a pile of rubble. Those still in Homs simply cannot leave—whether due to a lack of funds or simply having nowhere to go. The recent kidnapping of two church workers in the province, however, demonstrates the dangers of staying. One Iraqi said he would never return to his home village, just outside of Mosul.

When asked if the Syrian army was fighting for Christians, most expressed a deep distrust of the regime and its goals. Christian boys have gone off to fight when called up and returned in body bags, with parents not understanding what they are fighting for, other than Assad’s survival. This sentiment has increasingly led families to send their young Christian men out of Syria for the uncertainty of refugee life in Lebanon instead of serving in the Syrian army. Although Syria is not a democracy, they voted with their feet about their view of the regime.

NGOs have reported ten to fifteen Christian families a day coming into Zahale, the first major Christian town in the Beqaa Valley. Asked if they thought Christianity would be present in Syria and Iraq in twenty years, one immediately responded, “It won’t be there in twenty months.” Several expressed hopelessness in the chance that they will ever go back. “Syria has been destroyed.”

So what does the future look like for Christianity in the region? Bleak. Many refugees simply do not see a future for Christians in Syria. There has been too much destruction, too much violence, and the introduction of violent ideologies that will not fade away quickly. Despite the heroic work of aid groups—large ones like World Vision and Caritas, and small ones like Heart for Lebanon and Cradle Fund—the international community has failed to provide enough money for UN agencies to feed refugees. Even if the fighting ends today, it will take decades to rebuild and religious minorities will be incredibly vulnerable to groups espousing a violent religious ideology that hates religious diversity.

As this Saturday’s World Refugee Day draws near, refugees increasingly look to Western countries for shelter and safety. Christians are actively looking to depart for North American, Europe, or Australia. Tiny, crowded Lebanon cannot absorb 1.5 million refugees even if its political leadership somehow decided to act. Despite Lebanon being a natural place for Christians to resettle (given that it hosts the largest Christian community in the region), it is doubtful the political situation would allow their naturalization, as was done with the Armenians a century ago.

Christians are certainly not alone in their suffering; Sunnis, Shi’as, Yazidis, and others have fallen victim to conflict and equally deserve support. Across-the-board better funding for humanitarian assistance is needed, and more refugees—regardless of faith or ethnicity—should be brought to safety. But we are witnessing the possible disappearance of a major religion from the land of its birth. There are no easy answers or quick fixes; helping Christians in the Middle East touches on many complicated and sensitive topics. When asked about what should be done, a Syrian pastor replied, “I don’t even know what to pray for.”

Knox Thames is a Washington, DC based expert focusing on religion and foreign policy, human rights, and religious freedom.  The views expressed here are his own. Followed him on Twitter @KnoxThames.

Image: Iraqi Christians who fled with their families from violence pray during a mass at Saint George Victorious Cathedral in Amman, December 2014. (Reuters)