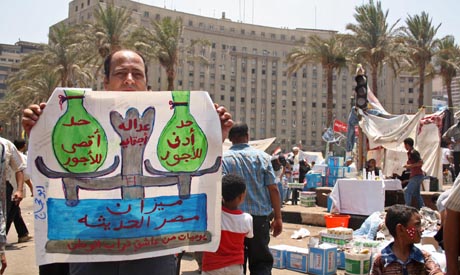 With presidential elections in Egypt looming, candidates are competing to attract voters’ support in what is expected to be the most challenging and competitive race in the country’s electoral history.  One of the most appealing campaign pledges announced by many candidates is their intention to put a ceiling on public and government sector wages, in what is seen as a way to achieve social justice and, at the same time, help the government reduce public expenditure.

As appealing as it might seem, implementing a maximum wage as a way to resolve the problem of disparity in government wages may do more harm than benefit. As the country enters a critical phase in its economic development and urgently needs an ambitious development strategy, imposing maximum wages would cause qualified workers to reject public sector jobs, further lowering the standards of its performance compared to the private sector. Why would highly specialized and skilled employees want to work in the public sector if they could earn significantly more elsewhere? A legal cap on public wages would, on a practical level, hamper the ability of government institutions to both attract and keep the most talented employees.

In that sense, wage inequality is not necessarily a social evil. When based on merits, wage differentials are considered a social good, spurring individuals to aspire, work hard and succeed. How people are paid should be more significant than how much they get. In the current design of the Egyptian pay system, the real problem is the absence of a clear linkage or correlation  between performance and pay. It is also the lack of transparency regarding specific jobs requirements, rules of appointment and eligibility criteria.

For disparities to be reduced and equal opportunity to be ensured, a new framework should be created in which public salaries are determined on the basis of academic attainment, qualifications and expertise. Instead of imposing a limit on what people earn, adopting a transparent and merit-based wage framework is the most efficient way to rebalance Egypt’s economy and society. The social justice argument does not hold here, as equality does not have to mean uniformity. In other words, those who are equal should be treated equally, but those who aren’t can (and should) be treated differently.

Indeed, the problem with the current seniority-based wage structure is that pay is not determined by achievement or performance. Human resources experts say that incentives are maximized when individualized. Hence, instead of imposing a limit on individual ambitions, the public sector employment scheme in Egypt needs to be redesigned in a way that attracts the best elements and motivates them to work harder. While a system that links compensation proportionally to individual performance is not easy to implement in a society where work culture has been historically evolving around grouped remuneration and evaluation, the seniority model is too static and does not meet the country’s needs for accelerated development.

Egypt’s legislators and policy makers need to understand that, if the Egyptian public compensation system is to be improved and optimized, it needs more than a hint of meritocracy and a huge deal of transparency. While laws are always a necessary component of any reform efforts, relying on them solely cannot guarantee the achievement of their purpose. Incentives are the forgotten ingredients that will make people abide by these laws and respect them, without rejecting the whole framework or circumventing it. “Incentives” is the key word for the post-revolutionary Egypt and the recipe for the rejuvenation of the national economy.