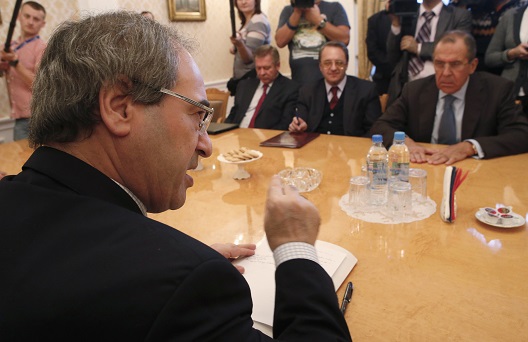 Russian Foreign Minister Sergei Lavrov has shared with the world his deep concern over publicly stated US intentions to attack Islamic State positions in Syria “without interaction with the Syrian government.” Lavrov emphasized that “Syria, as well as Iran, are our natural allies in the fight.” The Assad regime’s deputy foreign minister, Faisal Mekdad, demonstrated remarkably fulsome open-mindedness in indicating “no reservations” over coordinating with the United States, saying, “When it comes to terrorism, we should forget our differences … and forget all about the past.” Neither of these officials should be surprised if the Obama administration contemptuously ignores their advice.

Lavrov (reflecting the position of his boss, President Vladimir Putin) enjoys taking the legalistic high ground with respect to Syria. Sadly, he has grounds to make his case. Washington’s decision in December 2012 to recognize the Syrian National Coalition as the legitimate representative of the Syrian people was not accompanied by a strategy aimed at creating, inside Syria, a governmental alternative to the Assad regime. Incredible as it is, the United States still recognizes Bashar al-Assad as Syria’s president. It still recognizes regime order-takers like Mekdad as having diplomatic status. Thanks to the rise of the Islamic State the era of Syria policy-by-empty-gesture may have finally ended. Yet even now, Sergei Lavrov, a man whose country unceremoniously seized Crimea and routinely violates the sovereignty of the rest of Ukraine, is free to wag his finger at Washington for suggesting that Mr. Assad’s by-your-leave is neither necessary nor desired when it comes to US combat operations against the bogus caliph in Syria.

Ideally, the ongoing embarrassment of recognizing a serial war criminal as Syria’s president will be rectified soon in the implementation of an anti-Islamic State strategy, one that simply must address the issue of legitimate governance in Syria. It is the farthest thing imaginable from a surprise that Faisal Mekdad and his boss are willing to let bygones be bygones to deal with Washington on a government-to-government basis.

From the beginning, the regime has promoted jihadist terrorism as its enemy of choice: its ultimate ticket back into polite society. Yet, it has been too clever by half. Its calculated Islamist prisoner releases, its indiscriminate shelling, bombing, and starvation of residential areas, its remorselessly illegal mass incarceration of political opponents (replete with torture and sexual abuse), and its total lack of reservation or regret have indeed made Syria the ideal destination for idealistic and imbecilic jihad-seekers. Yet the totality of the regime’s survival strategy has rendered the regime absolutely unqualified to be part of the anti-Islamic State solution. If the sidelining of former Prime Minister Nouri al Maliki was the essential first-step in Iraq’s multi-step recovery process, what is one to conclude about a regime that quite literally has recoiled from nothing of a criminal nature? Forget about differences? Forget about the past? Tell it to the millions of Syrians regarded by their so-called president as animals to be herded and slaughtered.

Sergei Lavrov is correct to identify Iran and the Assad regime as Russia’s allies “in the fight.” The fight alluded to by Lavrov is, in the first instance, the struggle to eliminate the nationalist opposition to the Assad regime. As a practical matter, both Lavrov and Mekdad want to insure that the United States does not engage Islamic State targets in western Syria, where the regime and the ersatz caliph engage in (at least) de facto collaboration against disparate nationalist units known collectively as the Free Syria Army. Ideally, from the points of view of Lavrov and Mekdad, “interaction with the Syria government” would result in US aircraft focusing on Islamic State positions in eastern Syria, while the Islamic State, the regime, and the regime’s Iran-provided foreign militiamen work toward the common objective of erasing the nationalist opposition in western Syria.

The Moscow-Tehran-Damascus objective, obviously, is as it has been from the beginning of Syria’s uprising: make this a battle between two titans of criminality and terror; make the West choose between a regime whose depredations are mainly internal and regional in content, and an al-Qaeda descendant with presumably global terror pretensions. A major step in the achievement of this objective would be the killing of the nationalist opposition in Aleppo and elsewhere. The regime and the Islamic State are, for their own reasons, working hard to make it happen. A real challenge for those who would aid nationalists fighting both Assad and “Caliph” Baghdadi is to reconcile an understandable need for the vetting of aid recipients with the emergency need for robust resupply right now.

Bashar al-Assad and the regime he heads are recruiting magnets for the Islamic State in Syria. The regime’s military forces have been exhausted, overstretched, and utterly dependent on foreign fighters—both Iran-raised and those who have joined the Islamic State—to press the nationalist opposition. Artillery shelling, barrel bombs, and starvation sieges, all directed indiscriminately against civilians: this is how Assad and his top generals wage war. If the United States wishes to lose the war against the Islamic State, it will take the counsel of Sergei Lavrov and accept the forbearance of Faisal Mekdad. It will do neither.