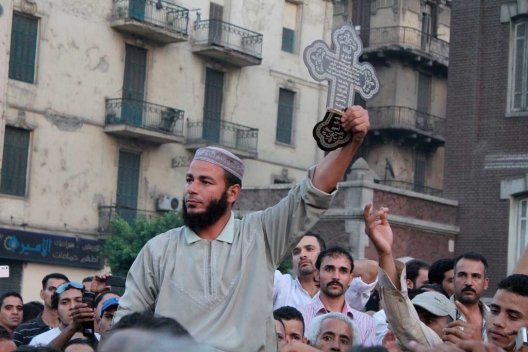 The climate for Egypt’s religious minorities has improved little since the 2011 revolution. Coptic Christians, Shias, Baha’is, and atheists have been subject to discrimination, hate-speech, arrests, and violence under successive governments. For many Copts, justice for violent attacks in 2011 and 2013 remains absent. Egypt’s Shia are continuously prevented from freely practicing their beliefs. Meanwhile, after three constitutional referendums, religious minorities such as the Baha’is are still denied recognition by the state, and atheists are targeted for expressing their views. All these groups have also found themselves the targets of blasphemy cases over the past five years.

On October 10, 2011, over two dozen protesters were killed and more than 200 wounded when a demonstration staged by mainly Coptic demonstrators was dispersed by military forces. The protesters were calling on authorities to investigate the destruction of a church in Aswan. Demonstrators said they were assaulted by attackers in plain clothes before they were confronted by security forces. Witnesses accused the military of using excessive force by firing live ammunition at the protesters and driving armored personnel carriers (APCs) into the crowds. Three soldiers were found guilty of involuntary manslaughter and sentenced to two to three year prison sentences. Of three civilian cases, in all of which Copts were the defendants, two were dropped due to a lack of evidence, and a third saw two Copts sentenced to three years in prison for stealing military weapons. Despite a number of complaints against top SCAF members, no other investigations were opened.

In April 2013, a mob attacked Coptic Christians leaving St. Mark’s Cathedral in Cairo, leading to violence that killed one Christian and wounded over 80 others. The fighting erupted after a funeral for four Copts who were killed the day before during sectarian clashes. In an unprecedented move, police fired tear gas and birdshot into the Cathedral’s compound. Following the incident, then-President Mohamed Morsi told the head of the Coptic Christian church Pope Tawadros II that he considered aggression against the cathedral to be agression against him personally. However, the Interior Ministry said in a statement that the mourners had started the violence and that the riot police intervened to stop it.

Months later, in the aftermath of the violent dispersal of Raba’a al-Adaweya square, where Morsi supporters were protesting his ouster, over 40 Coptic churches were attacked across Egypt, many of which were burned and damaged. A number of Church related institutions, such as schools and cultural centers, were also attacked. Christians blamed Muslim Brotherhood and Morsi supporters for the attacks. Human Rights Watch (HRW) said that neither the military nor the police were present at most of the attacks. Some Copts said they called the police for assistance, to no avail.

In 2015, Sisi became the first Egyptian president to visit Coptic Christmas mass. He attended the mass again this year and promised that churches destroyed during the violence in 2013 would be fully restored in 2016. Previous promises have so far gone unfulfilled.

A number of Shia have been arrested since the 2011 revolution. In December 2011, security officials arrested seven Shia for attempting to celebrate Ashura in front of al-Hussein mosque in Cairo without a permit. In July 2012, Shiite teacher Mohamed Asfour was sentenced to one year in prison on charges of “defaming Islam” for practicing Shiite prayers in a mosque. In November 2012, Shias were barred from entering al-Hussein mosque to celebrate after Salafists filed a complaint requesting that they be barred from the mosque. The Ministry of Religious Endowments again prevented Shias from commemorating Ashura in the mosque in 2013, 2014, and 2015. In November 2013, Shia activist Amr Abdullah was arrested outside al-Hussein mosque during Ashura. He was sentenced in February 2014 to five years in prison with labor on charges of denigrating Islam. His request for an appeal was denied. According to the Egyptian Initiative for Personal Rights (EIPR), ten Shia Muslims faced harassment or trials in 2014 due to their religious beliefs.

Harassment and arrests continued into 2015. In May, Shiite leader Al-Taher al-Hashimy was arrested during a raid on his home and accused of attempting to spread Shiism, disturbing social peace, and conducting covert activities. He was detained and interrogated for three days before being released on bail pending trial.

Major incidents of violence against the minority group have also occurred. On June 24, 2013, four Egyptian Shia Muslims were killed in a mob attack in the village of Abu Musalam in the governorate of Giza. Ahram Online reported that a crowd of at least 3,000 people led by Salafist Sheikhs attacked and torched five Shia houses in the village where worshippers had gathered. Reporters told the BBC that the attackers accused the worshippers of trying to spread Shia beliefs. Shia activists held Morsi responsible for the attack. “During the Syria solidarity conference attended by Morsi in the Cairo Stadium, Salafist sheikhs insulted Shias and incited hate against those Egyptian Shia citizens,” Shia activist Bahaa Anwar said at the time, adding that Morsi did nothing to condemn the statements.

Eyewitnesses said the mob beat the victims and dragged them through the streets. They said police did nothing to stop the attack, in which at least 30 individuals were badly injured, in addition to the four who were killed. The police “were just watching the public lynching like anyone else and did not stop anything.” Among those killed was Shia leader Sheikh Hassan Shehata, who had been jailed twice under Mubarak for “contempt of religion.”

On June 25, security forces arrested eight people in connection with the attack. Further arrests were carried out in the months following the attack. In December 2014, a Cairo court said 31 defendants would be tried for the killing of the four men. In June 2015, almost two years later, 23 men were sentenced to 14 years in jail without parole for the killing. The defense said it would appeal the verdict.

HRW said that authorities could have prevented the attack. HRW reported that on May 24, the Tawhid mosque run by Salafi leaders in the village of Abu Musalam, played a video of a group of Shia from the village visiting the Imam Shafei mausoleum in Cairo with Sheikh Hassan. The mosque then organized an anti-Shia march around the village.

According to HRW, anti-Shia rhetoric and hate speech was widespread following 2011 and promoted by Salafi political religious leaders, the Muslim Brotherhood and its Freedom and Justice Party, and al-Azhar. In 2013, ahead of the 2014 constitution referendum, the Shia community demanded greater religious freedom and constitutional protection from discrimination and hate speech.

While the 2014 Constitution describes freedom of belief as “absolute” and provides adherents of Islam, Christianity, and Judaism the right to practice their religion freely and to build houses of worship, the US International Religious Freedom Report for 2014 found that the Egyptian government and official Islamic institutions continued to harass Shia and use anti-Shia rhetoric.

Following the revolution, in February 2011, a group of Muslim youth set fire to Baha’i homes in Sohag that had been burned down two years before, forcing Baha’i residents to flee. EIPR said the homes had been destroyed after rumors that residents were returning. “A group of Baha’is had asked state security police to secure their return to their homes. They were told that they [could] return…and suddenly we found people attacking homes.” EIPR said there was evidence that state security officers contributed to inciting the violence.

In April, in an open letter attributed to the Baha’i community in Egypt, the writers called on Egypt to begin“charting a different course” in order to demonstrate that a “truly progressive approach to the organization of society is possible.” The letter called for a national dialogue aimed at “engaging people at all levels,” to unify Egyptian society. However, discrimination against the religious minority continued.

In February 2012, Salafi leader Abdel Moneim al-Shahat said the Baha’i faith poses a threat to Egypt’s national security.”We will prosecute the Baha’is on charge of treason,” he said. “We as Salafis refuse to deal with Baha’is, because they do not exist by virtue of their faith.”

In January 2013, Education Minister Ibrahim Ghoneim, former Vice President of Suez Canal University, said that Baha’is were not permitted to enroll in public schools. “The Constitution only recognizes the three Abrahamic religions. And as religion is a subject taught in schools, they do not meet the requirements for enrollment,” he said. Months earlier, he said, “The state only recognizes three religions, and the Baha’i faith is not among them. Thus their children do not have the right to register in government schools.”

Egypt’s 2014 constitution does not recognize the Baha’i faith or its religious laws. It bans Baha’i institutions and and denies Baha’is recourse to civil law for personal status matters, such as marriage.

In December 2014, the Ministry of Endowments organized a workshop to “raise awareness” amongst imams on the “growing dangers of the spread of Baha’ism.” According to the Ministry, the workshop aimed to maintain “the Islamic constants and foundations in the face of deviant thoughts that destroy the minds of young people.”

While some felt emboldened to speak out about their beliefs in the wake of the revolution, the space for Egypt’s atheists remains narrow, evidenced by a number of harassment cases and arrests that have occurred over the past five years.

In December 2012, atheist Alber Saber was sentenced to three years in prison on charges of blasphemy and contempt of religion for creating a web page called “Egyptian Atheists.” A similar case occurred In October 2013. Ismailia national security officials reportedly investigated Sherif Gaber, a university student who was arrested for allegedly setting up a Facebook group in support of atheism. In February 2015, he was sentenced to one year in prison for contempt of religion.

In March 2014, Alexandria Security Directorate chief Amin Ezz El-Din said in a televised telephone interview that a police taskforce would be formed to arrest a group of Alexandria-based atheists who declared their beliefs on Facebook. He said police officers would “legalize” arrest procedures against contentious activists.

On October 26 2014, atheist Ahmed Harqan fled to a police station after being attacked on the street. Rather than receiving protection, he and his wife were detained and physically and verbally assaulted by police personnel. Five days earlier, in an appearance on the Egyptian talk show Al-Qahera Wal-Nas, he had called Islam a “harsh religion” that was being implemented by the militant group the Islamic State (ISIS or ISIL). The public prosecutor ordered the investigation of a defamation of religion complaint filed against Harqan by a group of lawyers for statements he made during the talk show. Since then, Harqan and his wife have launched a web series as a platform to discuss their beliefs openly.

In November 2014, 21-year old atheist Karim al-Banna was arrested for announcing that he is an atheist on Facebook and for insulting Islam. In January 2015,  he was sentenced to three years in prison. His lawyer Ahmed Abdel Nabi said his client’s father had testified against his son, charging that he “was embracing extremist ideas against Islam.” According to EIPR, Banna’s name had appeared in a list of known atheists in a local newspaper. When Banna went to file a complaint against them at a police station, he was accused of insulting Islam and arrested.

In December 2014, school librarian Ayman Ramzy Botros was referred to an administrative court for promoting atheist ideas at his place of work and publicly through the media “in violation of society’s values, negatively affecting communal peace.” Botros had been among a number of Egyptians who signed an open letter in ‎September 2013 to then-interim president Adly Mansour calling for atheists to be represented in the 2014 Constitution drafting committee. Their main demand was the cancellation of Article 2 of the Constitution, which identifies Islam as the state’s religion.

Most recently, in April 2015, the Ministry of Religious Endowments announced it would form special groups to spread awareness of the “threats” of atheism, Shiism, and Bahaism in mosques. The Ministry said the groups would hold small monthly gatherings between evening prayers in mosques.
Elissa Miller is a Program Assistant at the Atlantic Council’s Rafik Hariri Center for the Middle East. Follow her on Twitter: @ElissaFMiller.